Gary Peters is scheduled to attend SoxFest, but hopefully fans will see more of him

The White Sox released the newest batch of names set to attend 2014 SoxFest on Tuesday, but an older name is one that had me thinking.

Gary Peters is one of the alumni set to attend the convention, and there is some timeliness behind it. Chris Sale broke Peters' single-season record for strikeouts by a Sox lefty -- which also stands as the modern-day record, since Ed Walsh is the only pitcher to strike out more batters than Sale. That might be the sole reason behind his appearance, but here's hoping that's just the start.

Should the Sox continue their recent tradition of Sunday, the 1964 White Sox are the most logical choice. It's the 50th anniversary, which is a nice, round number for a team that won more games (98) than all but three other editions of the Sox. Moreover, that was the peak of the most successful run in franchise history -- the only time they've won 90 games in three straight seasons was 1963 through 1965.

It's bittersweet, as most Sox history is. The Sox didn't make the postseason in any of those years, and they finished one game behind the Yankees in 1964. Unlike other Sox teams, a September collapse wasn't the culprit. The Sox actually finished the year by winning their last nine games and 10 out of 11, which closed out a respectable September/October record of 18-10. Unfortunately, that was the year the Yankees won 21 of 25 at one point in September, and the Bombers built themselves enough of a cushion to hold off that last Sox surge. Timing was never on their side.

They somehow won 98 games with an offense that was second-to-last in the AL in runs. Credit goes to a bad-assed pitching staff led by Peters:

As a team, the White Sox posted an ERA+ of 127. For comparison, the 2005 staff posted a cumulative ERA+ of 125. If the Sox had one more hitter, they would've been a World Series team.

But without a postseason appearance and a true standout hitter (sorry, Pete Ward), those Sox have been sadly overlooked. Their offense was so dire that Peters was used as a pinch hitter at times, although he did come through with a walk-off once.

Really, that whole era deserves a nod, because you seldom hear about those teams. On the team's most recent history DVD, the coverage of the 1960s is limited to this voiceover:

"The White Sox could not capitalize on the momentum created by the Go-Go Sox — a trend that would continue throughout the sixties (footage of White Sox player getting caught in a rundown). Despite the play of Aparicio and others, by 1970, the team’s fortunes had become almost… comical."

That's it! Three straight 90-win teams and those performances from Peters, Pizarro and Joe Horlen received not even a hint of an acknowledgment about their successes. As a result, I'd never seen footage of any of them until last month, when I could finally cross Pizarro off the list. He popped up for the Milwaukee Braves in Game 3 of the 1957 World Series, which is on YouTube. Here's his windup:

That's really the biggest reason* why I like the throwback promotion. For instance, it was great to see the 1972 Sox brought back to life, since that team was vital to the survival of the franchise. The 1964 team could benefit from the same attention, especially if they can dig up some footage so fans born after they played could finally see how they went about their business.

(*OK, the uniforms ain't bad either. The hat might be my favorite.) 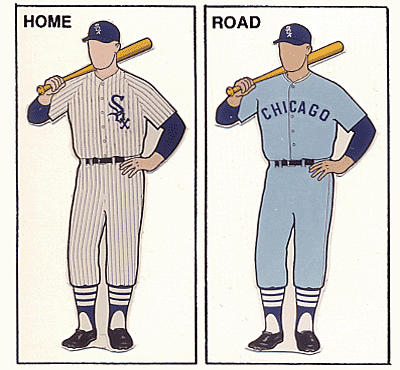