Share All sharing options for: Assumptions about Gavin Floyd

Ever since Gavin Floyd went under the knife for Tommy John surgery on May 8, most people have been hesitant to say he's thrown his last pitch for the White Sox. It's not a given that Floyd will return to the organization that groomed him, but if you had to bet on Floyd's 2014 team being "the White Sox" or "the field," you'd want to know which one pays better.

Which makes sense. The Sox aren't so rich in pitching that they couldn't use additional depth as the season progresses. Starting pitching wasn't a huge problem in 2013, and yet Dylan Axelrod still made 20 starts. Plus, Floyd and Don Cooper seem to have one of the stronger coach-player relationships you'll see, and if you're trying to rebuild a career after major surgery, it'd help to have a coach and training staff with a history.

That theory should be put to the test in the near future, as the market is starting to turn his way. We've seen three guys in the "right-handed pitchers seeking rebound" category sign with new clubs -- Tim Hudson to the Giants, Josh Johnson to the Padres, and, on Sunday, Dan Haren (reportedly) to the Dodgers. Plus, we're smack in the middle between the signings of last year's Tommy John gambles. The Cubs signed Scott Baker on Nov, 13, and the Twins agreed to a deal with Mike Pelfrey on Dec. 16.

There hasn't been a ton of activity circulating around Floyd, but there have been multiple teams. The Orioles are a given, because the past several years have shown that you can find somebody in the Baltimore front office who thinks Floyd's Maryland ties might mean something. But the rumor mill has also produced the Twins as a team of interest, and so that adds an element of novelty that would otherwise be missing.

Tim Dierkes at MLB Trade Rumors spoke to Floyd's agent last week, and as you might expect, the report is on the sunnier side:

Gavin Floyd's rehabilitation from May surgery to repair his ulnar collateral ligament and torn flexor tendon in his elbow is progressing extremely well, agent Mike Moye tells MLBTR. Moye says Floyd escalated his throwing program to three sets at 180 feet this week and is experiencing almost no soreness. Based on discussions with his doctor and trainer, Floyd's mound program should begin no later than December 7th and possibly sooner. Floyd's mound program will likely follow a two to three month timeline. Barring an unforseen setback, Floyd should be ready to take the mound in game action prior to Opening Day 2014.

Moye seems to be positioning Floyd for a contract offering him an opportunity for a starting job at some point in April or early May. Then again, "barring an unforeseen setback" offers a lot of little room, since setbacks are rather common. They're not all created equal -- some require a missed start, others require a missed season.

The Sox will almost certainly have a need for a starter at some point during the year, but at the moment, their rotation comprises five guys who rise above "placeholder" status, for one reason or another. Hector Santiago has the weakest grip on a starting spot, but he did enough to deserve a long look from somebody in 2014. Floyd would fit, as long as his representation doesn't insist on making somebody a lame duck right now.

But how confident can anybody be in Floyd coming back sooner rather than later?

Out of curiosity, I took a look at nine starting pitchers who underwent Tommy John surgery over 2011 and 2012, just to get an idea of when the Sox might have to actually have a spot free for a reasonably rebounding Floyd. As it turns out, there aren't really any guaranteed outcomes at this point in the rehabilitation cycle.

How'd he do: He had his worst season since establishing himself as a rotation fixture, but it wasn't that bad (14-13, 3.94 ERA, 96 ERA+). His numbers were weighed down by a sluggish start, but his command and results both improved in the second half. One year later, he led the NL in wins and cut his ERA by a full run. He's pretty much the poster boy for modern Tommy John recovery.

The Colorado Rockies lefty had a promising season cut short by Tommy John surgery. He returned to competitive pitching by May, but he experienced a couple of setbacks related to forearm tightness. The first cost him a start. The second knocked him out of action for three months. He finally was able to pitch regularly in September, making three in effective appearances for the Rockies just to get reps.

He had no such problems in 2013, going 16-6 with a 3.49 ERA. His strikeout rate dropped, but he allowed just 11 homers over 167 innings while calling Coors Field his home. Really, he returned from surgery a completely different pitcher, but not for the worse. He did routinely come up short of 100 pitches, though the need to pinch-hit for pitchers plays into that.

Oakland's oft-injured lefty returned to a minor-league mound one year and one week after his surgery. After six traditional stamina-building starts, he was ready for the majors. He returned to the big leagues with a vengeance, throwing seven innings of one-run ball against Minnesota on Aug. 21, 2012, followed by seven scoreless against Detroit six days later. In fact, he carried a 0.69 ERA through his first four starts before the Angels regressed him to the mean. One start later, Anderson strained his oblique, ending his season.

His 2013 season was a dud, but not because of elbow problems. He suffered a sprained ankle and a stress fracture in his foot. The guy just gets hurt a lot.

Lackey pitched 160 innings as a shell of himself during a tumultuous season in 2011, after which it was revealed that he needed Tommy John surgery. He recovered well enough to break camp in the rotation, but his season looked like it was over after his first start:

As Peavyesque as it looked, it was only biceps tightness. He came back to the rotation by late April, and was pretty much a rock for the rest of the season ... and postseason.

Like Floyd, Baker signed a four-year extension with the Twins with a $9 million option for 2013. Like Floyd, his last season under contract with the Twins ended with Tommy John surgery. It just happened to be a year earlier. Baker underwent season-ending surgery in April after two earlier MRIs failed to detect the torn ligament. So the Twins never had to consider picking up the option.

The Cubs jumped in on the upside bet, signing Baker to a one-year, $5.5 million contract. He strained his elbow during his first Cactus League outing, and was originally shut down for a month. As it turns out, he didn't return to a minor-league mound until mid-July. He had to take another break for the first half of August, and he didn't make it to Chicago until September. He threw two good starts and one stinker, so the investment didn't pay off.

Pelfrey started off 2012 with a strong April, but he couldn't get out of it with his elbow intact. He went under the knife on May 1, and he worked himself into shape quickly enough to make the Twins rotation to open the season. That's not really saying much, though, because Pelfrey carried a 6.11 ERA through his first 14 starts and didn't lose his rotation spot.

A strained back gave him a much-needed break in mid-June, and he came back to put together a respectable final three months. Then again, he alternated good years with lousy ones with the Mets, so it's hard to really say what a typical Pelfrey year is.

Here's another May surgery, but this one yielded far worse results. Luebke didn't throw a pitch for the Padres in 2013. He had a partially torn UCL and could've chosen a rehab program, but chose surgery because it's usually a less complicated road, since rehab doesn't eliminate the prospect of surgery.

The shortcut didn't work, as every attempt to get back into a routine was met with a shutdown. This month, San Diego GM Josh Byrnes finally offered a positive report, but it's still just 25 pitches.

Then you have the 30-year-old Morton, who engineered the smoothest turnaround of anybody on this list. He made his first competitive start on a minor-league mound on April 18, and even after a sore shoulder led to a brief setback in early May, he still returned to the Pirates in less than a year. He hit three batters in what was otherwise a decent first start, two more in his next start, then walked five in his third outing. However, he found his groove by early July, and ended up throwing 116 innings of 3.26 ERA ball.

We're alternating success stories with horror stories in 2012, and they don't get much more horrifying than poor Daniel Hudson's. Eleven months after going under the knife, he made his first rehab start for Double-A Jacksonville on June 4. It was cut short after two innings, and a few days later, it was revealed that Hudson re-tore his UCL, requiring a second surgery.

@DHuddy41 Doc said all went great! He's prob gonna kill me when he wakes up but oh well #whatsnottolove pic.twitter.com/AsAJ28XfiN

Floyd follows the Morton plan, making his debut in early May, getting OK results without his good command for a month, then finding his stride in June. 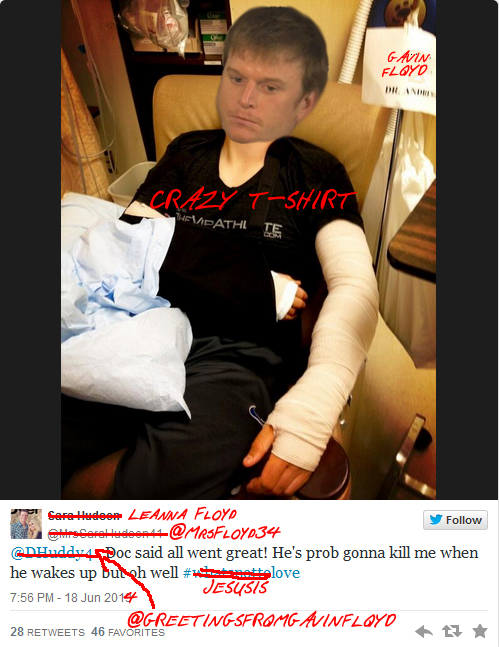 Floyd is ready to pitch every fifth day in the big leagues by June, but doesn't really round into form until August.

Beyond that, it's hard to project Floyd's 2014 value with any specificity. It'd probably be surprising if the value was zero, but Floyd ran hot-and-cold when healthy, so who knows what a new elbow would do to him coming back. Moreover, while Herm Schneider can work wonders, the Sox don't have a ton of experience in bringing back pitchers from Tommy John surgery.

The Sox could use him, especially if they trade a starter this offseason. Should they feel confident enough in Floyd's recovery time, they could treat Andre Rienzo as the kind of seat-filler who could slide to the bullpen when the time comes. But if we're bringing Rienzo into the picture, that's probably a good time to wrap this up. We're already drawing enough tenuous connections to talk about one starter who isn't right now, so there's not a burning need to bring in a second.