Ruminations on the return of Paul Konerko

Captain will try hand at doing captain things in last hurrah, but it's hard to say it will lead to better baseball

Share All sharing options for: Ruminations on the return of Paul Konerko

For instance, the White Sox announced the news on their social media platforms with great fanfare ... and a picture of Konerko getting jammed and breaking his bat. 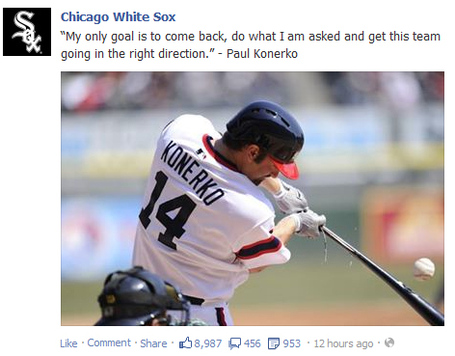 Likewise, listening to Rick Hahn and Konerko explain the new arrangement -- one that has Konerko taking a bench spot as a third first baseman/DH and trying his hand at mentoring in what will be his final season -- the biggest takeaways took the form of tacit admissions, mostly circling around two themes.

No. 1: The White Sox aren't as embarrassed about last season as they say they are. The Sox were not a professional outfit last year, and Konerko played a big part in it, producing less value than any regular player, and displaying the body language of a defeated man.

Here's what Rick Hahn said at the trade deadline:

"We feel we’re in a very good position with our pitching … to be competitive in the very near future. But we need to make improvements offensively. We need a more diversified offensive attack. We need better defense. We need a more athletic combination of position players on our roster. And we’ll get there. The goal is going to be for sustained success to get us on the level where we’re in the playoffs or contending for the playoffs for an extended period of time.’’

In order to address their long-running problem of a slow and righty-heavy lineup, they unnecessarily reserved a spot for a stationary right-handed hitter with no defensive or baserunning value, which results in crowding a more athletic and/or left-handed hitter out of the picture. More on that in a bit.

I understand that this is a purely sentimental decision from up top, so all the wailing and gnashing of teeth will accomplish nothing. And if they only pushed that line, I'd appreciate the honesty. But they can't frame it as a sound baseball decision when it runs contrary to the changes they said were necessary for the past several months.

No. 2: Konerko isn't a natural captain, at least in ways that require extending himself to others. It's great that he leads by example and he answers questions when nobody else can or wants to, but even he admitted that he "dropped the ball" on being a mentor this past season because he was dealing with his own problems.

He spoke of the role as if it were completely new to him, and some of it is. I mean, you wouldn't want an everyday player being an extension of the hitting coach. But as he elaborated over his 20 minutes, a lot of what he said he looked forward to sounded like things captains should be doing -- taking an interest in young players and helping them develop as professionals.

There must be some merit to Konerko's clubhouse command, because teammates are apparently unanimous in their support for his return. But as we've said before, this team lost 99 games last year, many in an utterly pathetic fashion, and chiefly because the Sox haven't developed a position player whose arb years are worth buying out in forever.

Konerko's return is basically trickle-down economics applied to a 25-man roster, prioritizing the comfort of the higher-ranking club members and pretending that it has a positive effect on everybody else down the chain by proxy. At some point, there needs to be some tangible evidence that the benefits actually get to people at the bottom, and it's scant at best.

Basically, I'm saying the pope would hate this deal.

But if you're only concerned with preserving the status quo, Wednesday was a great day. And that's why the Chicago media championed this deal unanimously, because they got their security blanket back.

The columnists continued writing hundreds of words in support of Konerko without making one sound baseball argument. You can pick apart any of these Fire Joe Morgan-style, but I'm only going to point out a couple of passages.

What Konerko wants to do is help his young teammates like Gordon Beckham, Dayan Viciedo, Conor Gillaspie and Tyler Flowers, and in the process help restore a sense of well-being to the organization he has played for since 1999. That's why he is taking an $11 million pay cut to serve as a bench player -- a platoon DH, at best -- on a team that lost 99 games a year ago. [...]

This is an unselfish guy doing a very unselfish thing, for all the right reasons. It's not surprising that he's doing it after a season in which he batted .244 with only 12 home runs and 54 RBIs. He had hinted that he wasn't quite ready to retire in '13 and talked almost wistfully about the possibility of returning as a part-time player, the way his friends Mark Kotsay and Jim Thome had ended their careers.

I like how it's framed as Konerko "taking an $11 million pay cut," when it's really "finding a way to make an additional $2.5 million." He's going from working full-time to part-time because he's reached the point where he can't be a starter. It's a new deal and it's (more than) commensurate with the responsibilities.

Moreover, I'm emphasizing that "unselfish guy" line, because look at this front page of whitesox.com. In both the headline column and the centerpiece, you see the direct consequence of the signing: 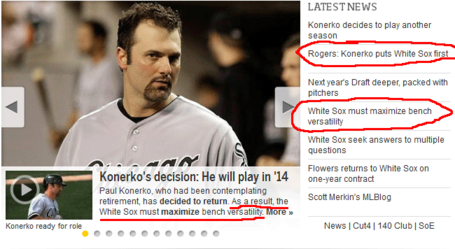 Because Konerko is coming back, other players have to take on added responsibility to cover for his limited skills, and players with a better shot at contributing to future teams have to be demoted or moved to make room. Even the most ardent Konerko supporters acknowledge that he's significantly compromising the roster, but they're writing it off as a fair sacrifice because of the alleged effect he has on others.

That's where Rick Morrissey comes in:

His role as a dispenser of enlightenment to younger teammates is the most intriguing one. I hope [Jose] Abreu is wise enough to follow around Konerko like a puppy, starting in spring training and lasting until the last game of the 2014 season. There’s so much he can learn just by watching Konerko’s game-day preparation, his attention to detail and his bearing on and off the field.

Nobody followed this advice more than Gordon Beckham, who adhered to Konerko's example to the point that he copies Konerko's back-bend in the batter's box and teammates poke fun at their father-son relationship:

mufasa aka Paul Konerko giving advice to his son @gordonbeckham

On a related note, Beckham is seen as a major disappointment, at least as a hitter. He didn't learn how to regain his doubles stroke from Konerko, but he did learn how to overthink himself into forgetting to eat.

Based on that example -- and all the other hitters who have taken steps backwards over the years -- I have more evidence saying that Abreu should stay as far away from Konerko as possible, because sponges only seem to pick up the gunk.

I'm not advocating a restraining order, nor am I calling Konerko selfish because his actions seem not-unselfish to me. It's undoubtedly in his self-interest, though. It's human to want to clean up unfinished business, especially if you're among the people most responsible for the mess. It's just up to other people to say, "It's better if somebody else does it."

Right now, there aren't many people saying that, because Konerko's return is crucial to those around the White Sox who need or want the familiar more than anything. If you're more concerned with wanting to know how this makes White Sox baseball more ambitious and less likely to repeat last year's clown-car demolition derby, you're going to have to wait until everybody's done hugging each other.

I do have a few ideas on how those of us who are left unfulfilled can get something out of this, but it's 4:50 a.m., so give me a day.