Looking at the American League: The Favorite

Taking a look around the AL one rival at a time. Part 1 of 15 First up- the reigning A. L. Champion Detroit Tigers.

Share All sharing options for: Looking at the American League: The Favorite

*no Twins, Indians or Royals

The Tigers' only hole is that they don't have a "closer," according to Dave Cameron and his ESPN article, that I saw linked to on some random Tigers blog, Motor City Bengals. They certainly saw their pitching get knocked around in the World Series, so I get the concern.

Personally I think they are better off with 'Weird' Al Alburquerque than Jose Valverde. 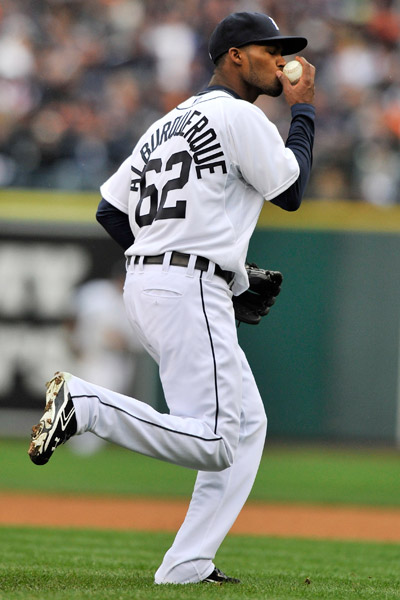 *Mere posers vs. All-Time Champion 'Stubby' Clapp, the Mayor of Memphis. I mean Stubby? And his real name is Dick? Dick Clapp, nick named 'Stubby'. Wow. That's so good they've been using it for generations- he is Stubby the third! Untouchable.

Back to the Tigers and their bullpen...

If I recall correctly, Al Alburquerque was concussed and missed some significant baseball time. Morneau didn't really come all the way back (yet?) from getting thumped in the head so there is cause for concern there, but his career line looks like the sort of workload you expect from a reliever over the course of a full season. He threw

Bruce Rondon. He's the closer (in theory). He can hit 100, but he's a rookie. Seems like he has the stuff, though.

Joaquin Benoit was crushed in the second half last season with a 5.26 post-break ERA, even though he lowered his WHIP and kept his K/9 better than one per inning. Homers were the culprit, and Jim Leyland says he doesn't want him to close because he doesn't think he can work on consecutive days.

Our old friend Octavio Dotel is in the D. Still. That's worth noting, because he's the most-traveled reliever in league history. He can still get it done.

So according to the 'offense is only as good as your bullpen', theory, the Tigers look good. But what about the actual hitters?

Those top 5 are going to be gone early in most fantasy leagues, and with good reason.

They're loaded. The Tigers can hit, catching the ball can be an adventure but they will score more than enough runs to make it an issue.

The rotation is probably the strongest part of the team. Most readers here already know them fairly well so I will just touch up on them, like the offense:

This started out as a very wordy reply to a comment on the thread yesterday discussing the club from Motown, but it was fun looking a little closer so I think I will continue across the AL.