The new catcher is out to earn respect from the fans as teammates express their faith.

Share All sharing options for: White Sox circle the wagons around Tyler Flowers

Monday on Instagram, the White Sox celebrated pitchers and catchers day by showing a White Sox pitcher and catcher celebrating. It's a simple concept befitting of the day, and served as a reminder that baseball time is under way.

It also reminds us that it's not going to be easy being Tyler Flowers: 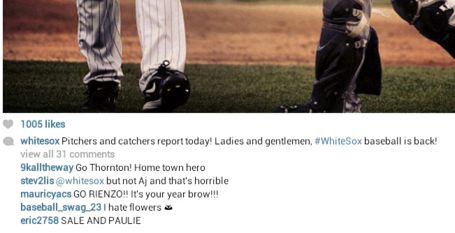 It's no secret that Flowers has his work cut out for him to gain the respect of the Pierzynski loyalists, and he seems to be taking the task seriously. Two days into spring training, he's doing the right things (showing up for camp 10 days early), and he's saying the right things:

And so the organization has stepped up their support as well. Robin Ventura took notice of Flowers' extra-early arrival:

"I think it’s big. He’s been here early working out and kind of setting the example for everybody else. He feels he’s ready, we feel he’s ready, and to give him that support. I like the fact that he’s come in here early and set the tone already and that he’s willing to go out and earn it, not just getting handed off to him."

While Jake Peavy (with backup from Jeff Manto) repeated his SoxFest sentiments, stressing patience with the first-time starter:

"I hope the fan base doesn’t get on Tyler Flowers’ case because he has such big shoes to fill. He’s not going to be A.J. Pierzynski, and he’s going to feel that pressure at times if he has a bad week not hitting. If fans get on him and boo —they want to win as bad as we do — it makes a difference [if they stay behind him].’’

But so far, the clubhouse leader in emphatic support is Mark Parent, who delivered the ballsiest defense to date:

"Being a former catcher, I’ve got no problems with Tyler Flowers running a staff,’’ Parent said. "He throws better than A.J., receives better than A.J. and he communicates with the pitchers in a better fashion than A.J. I’m excited about Tyler’s chance to go play. Not to say A.J. didn’t have a phenomenal offensive year last year. Tyler’s just a little younger [27] and more active behind the plate. If we get some offense and if our pitching is better because of [Flowers], we’ll be pretty good.’’

Either way, Rick Hahn says he still doesn't see a veteran catcher as a priority:

"While there may not be this sort of hedge you have in the bullpen for Tyler, that's not atypical and we do like some of the guys we have in house. Gimenez, again, people haven't seen a lot but he has got a lot of praise from our pitchers and our coaching staff as well and the versatility he brings. The kid [Bryan] Anderson is still 26 years old and a left-handed bat and has potential to help us if need be."

It's great to see such a high level of support early, because he's going to need all the help he can get in this battle with The Ghost Who Did No Wrong when April rolls around.

Speaking of which, the White Sox open the season at home against Kansas City. The last time that happened was 2009, which you might remember as the game where Dewayne Wise was booed for striking out in his first three at-bats. If you're into omens, I hope you blew by that previous sentence just to get to the end of this post.