Looking around the American League: Beast of the East

Taking a tour around the AL one rival at a time. In the second of 15 installments, we examine the new-look Toronto Blue Jays.

Share All sharing options for: Looking around the American League: Beast of the East

No team has transformed more this offseason than the Toronto Blue Jays. They are going for it by taking all the best parts from the Marlins, who to a man aren't very happy with their ex-boss. Pretty much if you made a lot of money in Miami, you are now playing in Canada. Starters Josh Johnson and Mark Buehrle were shipped over with shortstop Jose Reyes, catcher John Buck, and Emilio Bonafacio.

Buck was then packaged to the Mets with highly regarded prospects Noah Snydergaard (RHP), Travis D'Arnaud (C), and Wuilmer Becerra for knuckle balling Ace R.A. Dickey and a pair of catching prospects.

On top of that they add Melky Cabrera, who is fresh off a lost season to a steroid suspension (and currently linked to the Biogenesis scandal being investigated by MLB), and former Angel Maicer Izturis as free agents.

Basically, they are going for it. They are taking all that TV money and letting it ride. They Yankees look old, the Red Sox broke down at the end of 2011 and never recovered, Baltimore feels more like a flash in the pan than anything else, so why not the Bluebirds?

The Blue Jays' pitching was a mess last season. They lost the surge protector Sergio Santos in the first month, then watched three-fifths of their rotation get decimated by injuries in July. Two required Tommy John surgery (Kyle Drabek and Drew Hutchinson). The bullpen was worked over because of it. With Dickey and Buehrle in town, that won't be much of a problem this season, although Johnson and Morrow are above-average injury concerns.

So assuming they get a normal workload this year, who will they be handing the ball to?

Remember the guy who mowed down 4 White Sox in a frame last August? This is his elbow: 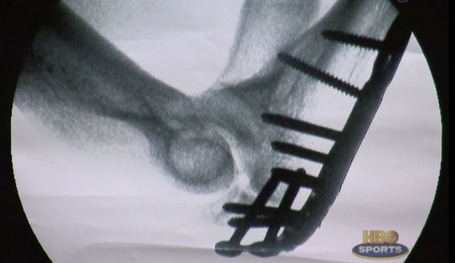 (via www.brobible.com via HBO sports)

Steve Delabar falls into the Matt Thornton category, a hard throwing reliever who needed to get out from under the Mariners organization to blossom. His splitter is straight up nasty. His command of his fastball improved after the trade and he looks like he could be really good out of the pen.

Sergio Santos feels "free and easy" as of yesterday. Like everyone else, he is 100 percent to start spring training after last year's shoulder surgery. Will he close?

Possibly, because Casey Janssen, the current sitting fireman, had a shoulder surgery of his own after last year. He called it a "cleanup," but recoveries from shoulder surgeries are never a given. Janssen is at about 75 percent right now.

One of those future Royal stars that never materialized, Jeremy Jeffress, is up there. He's entering what should be his prime. Acquired by KC in the Zack Greinke deal, he was given to Toronto for cash. Jeffress likes the pot. He missed 50 games in 2007 and 100 in 2009 for failing drug tests. It's now or never for this kid.

Here's how CAIRO (via rotochamp) projects the Toronto lineup:

A lot of power throughout with speed taken from the Marlins at the top and bottom.

Who wouldn't want Jose Reyes leading off for them? He distracts the pitchers and forces them to throw a lot of fastball.

Which is going to be great for Melky, as long as he isn't just a shell of his juiced up self or suspended again. No way he gets suspended from that slip of paper, right? But if you are the type who hates steroids in baseball, this is probably a good direction to direct your scorn.

Jose Bautista only had 332 ABs last year thanks to a bum wrist. He is slowly working his way back, so I dont see .600 slugging percentage this year, but he will probably still be over .500, and a .900 OPS doesnt seem unreasonable to me.

Edwin Encarnacion had a breakout campaign in 2012, mashing 42 home runs. For his career he has hovered between 1.5 and 2 WAR per season, then all of a sudden he brings the 4.4. If he can stay north of 3, this team has a good chance to take the East. I see him as the key.

Brett Lawrie came up with a lot of hype last season. He only hit 11 homers, but he is just 23 and should see some gains in the power department. I would give him the stop sign though -- he was nabbed 8 times in his quest for 13 steals.

By trading D'Arnaud after his breakout campaign, the BJ's are showing a lot of faith in catcher J.P. Arencibia. Like most of the Jays, he missed time with an injury after a HBP fractured his right hand.

If the Jays are as threatening as they look, the East should be fun to watch this season for a few innings while waiting for the Sox game to start.