With Tyler Flowers finally slated to become a full-time starter, let's take another look at the trade that brought him to the White Sox.

Share All sharing options for: Revisiting the Javy Vazquez trade

Barring trade or act of God, Tyler Flowers will be the starting catcher for our Chicago White Sox come April. No amount of wailing or gnashing of the teeth will change this. For the first time since coming over in a trade from the Atlanta Braves in December of 2008, he will be given the opportunity to provide the Sox a true return on investment.

I got bored today and started to map out a trade tree resulting from this deal. Lesson learned? If you ever try mapping out a trade tree using Javier Vazquez, you will rapidly go insane. The man is the 2000's baseball equivalent of Kevin Bacon. So to keep things simple, I chopped off the branches involving anything before this trade. I even made you a picture, because I love you. 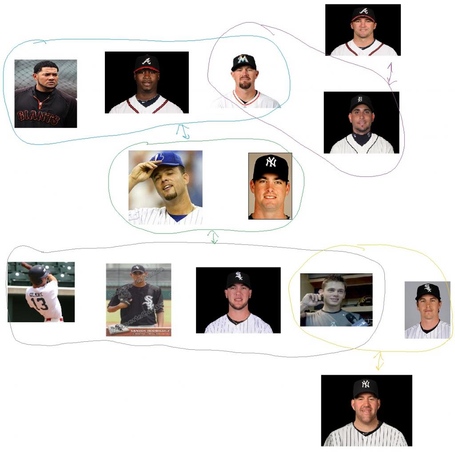 And that's with one remaining trade trimmed off! All for the want of Brent Lillibridge!

So far, this trade has resulted in 2.5 bWAR above replacement at a cost of about $2.8MM for the White Sox. Jon Gilmore is likely never going to play in the majors. Santos Rodriguez is interesting as a tall left-handed reliever, but doesn't even crack larry's top ten prospects. Brent Lillibridge had one magical season over 3.5 years, contributing a whopping 0.8 bWAR before being shipped off to Boston (more on that later). Over a few cups of coffee and a season as a backup catcher, Tyler Flowers has been worth 1.7 bWAR, making him the most valuable piece in the trade. Unless he hits like an injured Brent Morel, that number is likely to more than double this season.

But to say that 2.5 bWAR is all the Sox earned so far is a bit off. Somehow Kenny Williams turned Brent Lillibridge (-0.3 bWAR) and Zach Stewart (-0.7 bWAR) into half a season of Kevin Youkilis, good for another 1.1 bWAR and almost a spot in the 2012 post season. So we're up to 3.6 with the incredibly likely possibility of more this summer. Which is great, except one thing: Atlanta got a lot more.

Vazquez's odd year magic came back in 2009, as he posted an ERA+ of 143 while being worth 5.9 bWAR at the bargain price of $11.5MM. That was good for the 7th best bWAR for pitchers in the NL while finishing 2nd in strikeouts and 9th in ERA+. Boone Logan was good for an appropriate -0.2 bWAR because he's Boone Logan. You're good enough at math the recognize that on strictly a bWAR basis, we're 2.3 bWAR in the hole right now. But nothing is allowed to be that simple (also, judging a trade solely on bWAR is okay, but not entirely perfect).

The Braves more or less lived the dream with Jazy, buying low and selling high. A little over exactly one year after trading for them, Vazquez and Logan (a so-so law procedural on TNT) were traded to the New York Yankees for Melky Cabrera, Mike Dunn, Arodys Vizcaino, and cash considerations. Javy's second campaign with the Yankees went far worse than his first, being worth -0.8 bWAR over 157.1 innings and then leaving for the Marlins after the season. Boone Logan finally figured it all out and has become a reliable left-handed option out of the Yankees bullpen the past three seasons, racking up 2.3 bWAR in the process.

Melky Cabrera would go on to have the worst full season of his career, with a .671 OPS and poor defense combining to be worth -0.5 bWAR. He was not well liked by the team, management, and the fans and wound up being released and ultimately signing with the Royals for the 2011 season. Mike Dunn threw 19 innings (somehow 0.5 bWAR) for the Braves before being combined with Omar Infante and traded to the Marlins for Dan Uggla, who has been appropriately paid for the 4.3 bWAR he's given the Braves. Arodys Vizcaino would turn into one of the Braves' top pitching prospects before undergoing Tommy John surgery and being packaged with Jaye Chapman and sent to the Chicago Cubs for Paul Maholm (0.5 bWAR), Reed Johnson (-0.3 bWAR), and cash last season. He is now the 5th ranked prospect for the Cubs according to John Sickels.

That is a lot of spinning plates. So what does it all mean? Well, the Braves got a great season out of Javy Dent and wound up turning him into some useful parts and some not so useful parts. The Red Sox got absolutely hosed. The Yankees ultimately received a useful RP at the cost of a young prospect that would go on to become a stud. The Marlins were the Marlins. And the White Sox? That all depends heavily on what Tyler Flowers winds up doing over the next few seasons. If he ends up a 2.5-3.0 bWAR per season performer throughout the remainder of his cost-controlled years, then all those moving parts were worth it.