A change of scenery catapults the third baseman from a fight on the fringes to a near-lock for a bench spot.

I need a direct line to Rick Hahn so I can ask him if it's OK to close up White Sox Outsider 2013, because Friday's acquisition of Conor Gillaspie forced some late writing and re-writing.

Sure, I could have left Lars Anderson in there, except he leads off the player-preview section alphabetically. That would have looked pretty dumb, right? So Anderson's 2013 write-up joins the Zach Stewart preview and Zach Stewart eulogy in Outsider exile. There have been greater casualties in previous years, and even more useless profiles (I had one for Johnny Damon in 2011).

But yeah, Gillaspie has an interesting origin story. Like Chris Sale, he was called up to the Giants in the same year he was drafted. Unlike Sale, the Giants didn't have big-league plans for him immediately. They just figured the September call-up was a way of paying him an extra $65,000 without technically going over slot.

Once he got to the Giants' clubhouse, he distinguished himself further from Sale by playing his cards about as poorly as he could.

I read that he didn't mesh well with the San Francisco veterans, but didn't know the specifics. Reviewing the clips in chronological order, I first came across this quote, when Gillaspie was asked whether he could develop into a hitter with some power:

"I would probably say I just went through puberty a year or two ago,"

Yup, they had quite the card on their hands. But he made matters worse when talking about his first at-bat on Sept. 11. It was a groundout sopping with potential, evidently:

"I made contact and got down the line pretty good. Hopefully they'll throw me in there the next couple of weeks, maybe a couple of starts. I think I can play as good as any of these guys up here. That's why I'm up here."

Of course, that's not why Gillaspie was there. Gillaspie received the promotion just to pick up an extra $65,000, and the veterans didn't much care for his unearned swagger.

To Gillaspie's credit, he learned where he went wrong, and while his career hasn't panned out the way many expected, it's not for a lack of hard work or respect. The hitting tools never quite developed beyond an ability to make contact, and his defense was behind the curve as well.

When he made it back to the big leagues in 2011, he seemed to have learned where he went wrong. And when he hit his first home run for the Giants in September of 2011, his teammates didn't give him the silent treatment. Then again, it'd be kind of hard to when you see how it happened:

Anyway, those problems seem to be behind him. I only bring them up because:

I've written before that the Sox really had to be confident that Sale could handle all aspects of being a major leaguer, especially considering they had no intent of sending him back to the minors after his introductory 10-inning trial. As it turned out, Sale couldn't have been more grounded.

The White Sox hazed Gillaspie professionally by having Sale and John Danks throw him live batting practice. But as you might expect, the response has been positive, starting with Gillaspie:

"You have to understand this is a business, just like every job in the world," Gillaspie said. "Pablo [Sandoval] is a pretty good player, and I probably wasn't going to be able to beat him out. It's a good opportunity for me. I'm excited.

"I don't have a superstar tool. I'm not going to be somebody who will hit 50 home runs in BP. It's not who I am. I'll definitely work for you. I'll definitely play hard and practice hard. I try to play the game the right way, and whatever happens at that point, just have to roll with it."

Likewise, Hahn said they were anticipating that he might shake loose from San Francisco's depth chart:

By the way, Hahn has some work to do with regards to his name recognition, if his "related video" thumbnail is any indication: 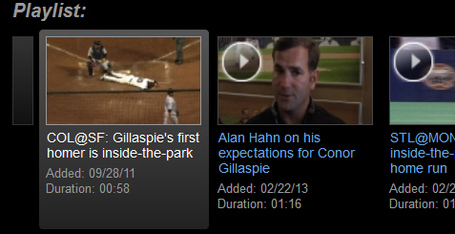 Unless Gillaspie competely comes unhinged either on the field or in the clubhouse, it certainly seems like the last bench job is his to open the season. That said, trying to read into this beyond April would be premature. If he's got a wet newspaper for a bat and his defense is Teahenesque, I don't think they would be reluctant to try sneaking him to Charlotte -- especially if Brent Morel is in full working order. Maybe another team would claim him, but Gillaspie's lack of real upside should keep the Sox from being especially territorial.

Speaking of territorial, Gillaspie is wearing No. 12.