The crouch remains, but the hands are quieter. As always, will it make a difference?

If a picture is worth a thousand words, then 3E8 produced a treatise last month on Gordon Beckham's futile scramble to solve a slump that has lasted all but two months of the last three years. 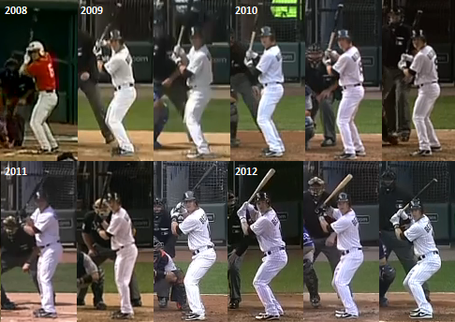 On Sunday, we could see it (d)evolved further:

The new look produced familiar results -- a strikeout and a popout to the third baseman in foul territory. If you want to be optimistic, it sounded like he roped a double the day before. Plus, Alex Rios had a lousy spring last season while trying to rediscover his all-fields approach with a new stance, but it kicked in once the season started.

But Beckham's tinkering is so well-known by now that Scott Merkin turned around a detailed article about his stance's changes immediately. The crouch remains, but it looks less athletic than it did last year. Perhaps it's because the lack of a bat waggle makes it look less coily:

But Beckham now has a Cal Ripken-esque look at the start of his at-bat, with the bat flat over the shoulders before being moved straight up as the pitcher delivers. As Beckham tried to explain, it basically takes him more directly from Point A to Point B in the swing, eliminating an unnecessary middle stop.

There's more involved than just this tweak, though. Beckham put a great deal of work into his grip during the offseason months, per advice from the organization's higher-ups.

"It was an unusual situation where when we looked at him and thought, 'Where would we start first?' The unusual part is collectively, we said we would change his top hand," said White Sox hitting coach Jeff Manto of Beckham. "That's unheard of. He has such a strong grip, and like an overgrip, I guess. I don't know what you would call it on his top hand. I've never seen anything like this."

There's plenty more from Manto, and the change makes sense when assessing his output of batted balls, because there's one development that makes no sense. He was able to rein in what was an absurd infield-fly rate from 2011 to 2012, and that should have helped his BABIP, since pop-ups seldom fall for hits.

That's hard to do.

In a lot of cases, his line drives were powered by golf cart engines. You'd see it off the bat from the center-field camera and think it had a chance of splitting the gap, but the governor would kick in and allow an outfielder to catch it mid-stride ... or mid-gait, maybe.

Beckham is cognizant of this issue, which would normally be good:

"I think part of the reason there was a lot of inaccuracy sometimes last year is because there was one more step to get it through the zone. You are not able to be direct and drive balls. You are going to see a lot of balls [slice] and a lot of balls [hook]," said Beckham, using his hand to illustrate the wrong-way path of the baseball. "I just wanted to kind of eliminate that and become very direct with my hands, and that way I can really backspin in both the left-center and right-center gap."

The problem is that Beckham is hyper-aware of everything he's done wrong, and that hasn't really helped his career. It's similar to the "Pounds of Muscle" corollary -- the more a player has to talk about how he's fixed himself, the less likely it is that he'll be able to turn it around. Spring training has its own emissions test, and the goal is the same: the fewer the better. Beckham hasn't figured out how to pass it yet.