The first five in an improving but still very weak system

Share All sharing options for: Top Ten White Sox Prospects for 2013: Part One

The White Sox minor league system is slowly lifting itself off the canvas. The consensus ranking last offseason was dead last; now, the consensus is that it's not dead last, but rather something like No. 28.

Most of that comes from actually having a first-round pick. But even excluding that, the minor league talent pool got, at a minimum, a little deeper. And there's arguably more quality players, particularly among the position players.

In the short term, what you can expect this season to come up from the minors is more of the same you saw last season. Buddy Bell said there are "15 to 20 guys" in the minors who the White Sox think will play a role in the majors. But nearly all of those project to be relievers, utility players and fourth outfielders. While someone might be a bit more than that (even this season), the players with real impact-level potential are a year or more away.

So while there are quite a few guys who can be counted on to slot into secondary roles, the White Sox will still need their big-money players to stay healthy and produce because there's no savior on the immediate horizon.

The White Sox drafted Hawkins 13th overall this past June and he immediately became the top prospect in the organization. After signing for a $2.475 million bonus, Hawkins went to Bristol, where he held his own but certainly didn't overwhelm with his performance. As we've now grown accustomed to the White Sox doing, the club aggressively pushed the then 18-year-old to Low-A Kannapolis. The righty's production took off there and, after getting another promotion to High-A Winston-Salem to join their playoff push, he continued to shine against older and more experienced players.

While Kenny Williams described the Corpus Christi native as a five-tool player, it's difficult to see that projection. His arm is strong but a lack of accuracy makes it less than a plus tool and his speed, while solid now, is going to diminish given his size. While he is a good fielder, he's destined for a corner outfield spot, I think left field, but right field is by no means out of the question. Contact is a potential future issue, as reflected in his 22% strikeout rate, but he showed an advanced understanding of the strike zone. Hawkins does, however, possess plus power, which helps project him as a future first division starter in a corner outfield position. If he manages to harness his hit tool, he could be an absolute monster.

Keenyn Walker congratulated Hawkins on his birthday last November by referring to the youngster as a 19-year-old who looks like he's 25. And that's part of the problem. Hawkins is physically quite mature now and the expectation would be that he fills out his large frame with a resulting diminution of his athleticism. I've seen a Kevin Mitchell comp put on him and, while I generally avoid comps unless they are very comparable, I think this one fits. Hopefully Hawkins ends up being less of an eater/crazy person than Mitchell. ETA: 2015.

Sanchez was on my sleeper list going into the season and he certainly woke up. The switch-hitter continues to make contact and, despite a lack of home-run power, he makes surprisingly hard contact. Guys who lack power usually have trouble drawing walks and Sanchez is no exception. But he did bump his rate up to 7.5% from his 5.0% at Kannapolis last year. It's unlikely, however, that he'll develop offensively into much more than a high average, low walk and very low power hitter. 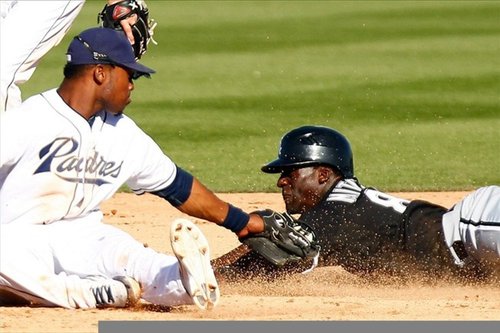 Jared Mitchell hangs on for another year at No. 9.

Defensively, Sanchez probably fits at shortstop, second base or third base but, while he's an elite fielder, the arm doesn't quite match. Given the Venezuelan's better than average defense and positional flexibility, he's got a very good chance of at least becoming a utility player. If he continues to develop - and he's still just 20 years old - he'd probably best slot in at second baseman. He's an organizational favorite and he got talked up this offseason as a possible Opening Day starter. The White Sox said they signed Jeff Keppinger, in part, to ensure that Sanchez could continue to develop in the minors. I suspect he won't be there much longer, though. ETA: late 2013.

Thompson's methodical climb up the affiliate ladder was accelerated at the end of last season. The White Sox sought to get this raw talent as many plate appearances as possible, and so he found himself in Charlotte for their playoff push. Whatever level, though, the story for the 2009 second round pick remains the same: big power with big strikeout numbers. A reasonably positive sign is that he's kept his strikeout rate basically the same at each level, hovering around 28.5%. Birmingham's stadium would have been an interesting test for his power but, since they are moving into a new park in 2013, it remains to be seen if the Barons' home remains a pitcher's park. However the park plays, it's not going to be the worst environment in the minors for home runs like their old park was.

A big positive for the soon-to-be 22-year-old is that he's developed into a legitimate centerfielder, which significantly lowers the floor for his offense - though he'll still need to learn to recognize breaking balls if he wants to be a legitimate major leaguer. In the past, Thompson's prospect status rested largely on his massive ceiling, which, like all ceilings, is a remote outcome. He's now closed the gap a bit between his floor and ceiling, with a lot of people thinking he's got a chance at being a second-division starter even if he doesn't realize on all his tools. I'm with them on that. ETA: late 2013.

This 23-year-old is my favorite kind of prospect: left-handed pitcher with a big fastball and some deception in his delivery. Snodgress adds another component - size - that is very helpful, but not necessary for me. Mix all that together and you're probably looking at a guy who can at least project as a decent reliever.

I think there's more to Snodgress than that and, for me, he's the top starting pitcher prospect in the organization. His fastball is a plus pitch, sitting in the 91-94 MPH range. The 2011 fifth rounder has a curve that I think will be a plus pitch. He rounds out his repertoire with a much improved changeup that should develop into at least an average offering.

With all that, you're probably asking why is he just No. 4 on this list? As it almost always is, it's control. He had an 11.5% walk rate for Kannapolis, but he did show improvement to 9% after his late season promotion to Winston-Salem. Unsurprisingly, he relies heavily - too heavily - on his fastball; hopefully he can be convinced that his other offerings are pretty good now and he can effectively mix them in with more frequency.

The White Sox have made a lot of progress with a guy who couldn't hit the side of a barn in his last season at Stanford, ironing out some mechanical issues and also speeding up his arm on his changeup to match his other offerings. He's probably going to take a good amount of seasoning but projects to be worth the wait. It should be back to Winston-Salem for him. ETA: 2015.

The 24-year-old Brazilian certainly was well-traveled this year. The righty went from spring training in Arizona to Winston-Salem back to extended spring training then on to Birmingham and Charlotte. And, once the season ended, he was back in Arizona for the Fall League then pitched for Brazil in the WBC qualifier and ended up in Venezuela playing winter ball. Much of this travel was the result of a 50-game PED suspension and the resultant need to get him adequate innings. That goal was accomplished as he attained about 150 (official) innings.

Walks remain a problem, but he's managed to cover for that by striking hitters out. His performance for Birmingham suggested that he might still make it as a starter, but he'll need to keep proving that at Charlotte or else he'll quickly find himself in the bullpen as a setup reliever. His fastball has always been excellent, peaking in the mid-90s, and he gets excellent arm extension (measured in the AFL as 6'9", well above the MLB average of 6'1"), which makes it seem faster to hitters.

Most importantly, though, his secondary offerings were much improved this year, particularly his low-to-mid-80s cutter. His upper 70s curve can be a swing-and-miss pitch when he's right. Depending upon how the starting pitching shakes out, Rienzo could be one of the first call-ups should the need arise. ETA: Mid 2013.