The second half of the White Sox top ten

Continued from this morning... 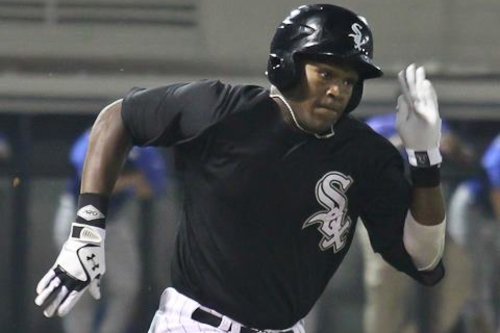 There seem to be a lot of people smitten with the 23-year-old right-hander. When reading White Sox prospect lists, he's basically the consensus No. 4 prospect in the system. I'm not quite as impressed. First, there are durability concerns that showed up again last season with Johnson's season debut delayed until June due to shoulder tendinitis. Second, the 2011 second-rounder's repertoire is only impressive when viewed cumulatively. He's got a few decent pitches, but nothing outstanding. His fastball is low 90s, with the sink the White Sox love. Both his slider and curve look like solid average offerings and he's working on a changeup that likely will join his other three pitches in the "average" designation. With nothing that overwhelms a hitter, I think he's going to be pretty hittable at higher levels.

He gets tagged as the top starting pitcher prospect for the White Sox but I'm seeing bullpen as his future. His fastball would sit in the mid 90s that he only occasionally reaches as a starter and I think his slider would complement it well.

Since he hasn't accumulated a lot of professional innings, though, he'll certainly benefit from being developed as a starter. I'd expect him to begin 2013 with Birmingham and likely see Charlotte before the end of the year. By mid-season, assuming reasonable progress, he'll probably be in any discussion regarding a call-up for a spot start. ETA: Mid 2014.

Walker was banged up pretty much the entire 2012 season and had offseason surgery on both his right knee and left shoulder. He wasn't able to workout for much of the offseason, as he waited for his shoulder to sufficiently heal, which resulted in him losing 22 pounds. The injuries didn't seem to hinder his progress so hopefully the remedy doesn't, either.

And this personal favorite certainly made progress in 2012. His best skill is undoubtedly his speed, which he uses effectively on both offense and defense. He collects plenty of infield hits and he was 56 for 71 in stolen bases. In center field, he covers about as much ground as anyone this side of Billy Hamilton and his arm is average.

Walker also has good on-base skills, walking in 15% of his plate appearances, but he gives that back with his 29.5% strikeout rate. Rick Hahn stressed that Walker "knows the strikezone" but needs to work on "refining his swing mechanics". When I watched him, his problem wasn't that he didn't have a good approach at the plate - he's certainly not a hitter who looks lost - but that his hit tool just isn't good enough to execute. He doesn't have much power. While some think he'll develop more game power, he's going to need to make more contact for it to mean anything.

His other problem is that he's billed as a switch-hitter but he's basically useless from the right side, batting .235/.318/.299 so far in his pro career. His numbers from the right side are so bad that they disguise how good he can actually hit - in 2012, he put up a .288/.409/.425 line from the left side. I'm always reticent to suggest a player abandon switch-hitting, because learning how to hit same-handed pitchers is not easy and Walker in particular already has a lot on his plate, but he's far enough away that it might make sense. The obvious rejoinder is that his left shoulder was injured and that likely had a significant effect on his hitting from the right side; however, he didn't seem to be much better before the injury.

The soon-to-be 25-year-old's stock certainly has fallen since the days when he was populating the middle of top 100 lists for various publications. The Dominican looked like he had a chance to be a mid-rotation starter with two or three plus offerings. Alas, that doesn't look to be the case anymore.

But don't make the mistake that some have made in dropping him way down the White Sox organizational chart after another mediocre minor league season (this one also hindered by shoulder tendinitis). I think he's still a strong candidate to be a very effective reliever and maybe an eighth-/ninth-inning guy. He's got the now classic arsenal for it: a heavy, clearly plus fastball that would be mid-90s out of the pen and a sharp slider. I still like his third pitch, which looks like a splitter and is a big reason for the comparisons to Jose Contreras, but he perhaps would largely abandon that if he ends up as a reliever.

The issue is mainly his slider. His mechanics can get messy and he loses the break on his slider and the ability to command all of his pitches, making him too hittable. I think the White Sox will iron that out enough - likely with the eventual assist of him moving to the bullpen - that he'll be a good addition to the major league bullpen in the second half of this season. ETA: Mid 2013.

He's beginning to be that guy who seems like he's been around forever. The 2009 first-rounder burst out of the gate in 2012 with an excellent first month or so at Birmingham, got people all excited again, and then markedly tailed off. He did end up with Charlotte, where the wily, more advanced pitchers took advantage of his continued rawness as a hitter.

The White Sox are again talking him up. Hahn told me that Mitchell "figured out a few things" in the Instructional League and, unsurprisingly given that he appears to be Buddy Bell's favorite player, Bell is "very excited" about Mitchell, saying that "he doesn't look so much like an athlete trying to play baseball but closer to a baseball player who is an athlete." We shall see.

A lot of the talk about acquisitions like Jeff Keppinger and Angel Sanchez centered on them being made to ensure Carlos Sanchez isn't pushed into a major league role too season (aka, Gordon Beckham syndrome). More quietly (and less importantly, of course), the White Sox bolstered their left-handed center-fielder spot, currently occupied by Alejandro De Aza, by re-signing DeWayne Wise and trading for Blake Tekotte. Throw Jordan Danks into that mix and there's a pretty big buffer between Mitchell and the majors.

Mitchell is still raw and, as I've mentioned many times, with those guys sometimes the light switch comes on and they show substantial improvement in a short time; but the window for that continues to rapidly close for Mitchell. Even if that switch is never flipped, his defense and other tools should eventually propel him to the majors in a utility role. ETA: Late 2013.

As usual, you could put any number of players in this slot (and the ones right above it) and you're not going to get much argument from me or anyone else. And I went over this spot a lot over the last few months (most of this list was written in November/December) and I kept coming back to a left-hander I saw throw for the first time last April on a tape of a Kannapolis game at Hickory. It doesn't hurt him that he fits the profile of my favorite kind of prospect: lefty with a fastball. But there are guys that you see play and they just have 'It'. And Olacio struck me as a kid who has It.

He just turned 19 and he's already a big guy - 6'7" and probably 250. Think CC Sabathia-type build. And that can go horribly awry, particularly with a kid from the Dominican in a new country with new food, new culture, etc. Nick Capra acknowledged that Olacio "had a tough time acclimating to the U.S" and "his body is something we have to work with him on." And that's before we even get to his pitching.

He's got a lot of talent but he's very, very, very raw. His fastball is low 90s but neither he nor anyone else knows where it's going half the time. He visibly struggles with his other pitches, a changeup and what looked to me like a slider. Part of the reason he had a tough time acclimating was that, as effectively a high school senior, the White Sox sent him to full-season, Low-A Kannapolis for his stateside debut, where he pitched as a reliever. There are only a select few U.S. pitchers drafted out of high school who would get their first taste of pro ball at that level - and they're doing it a full year later.

He was pulled back to Bristol when the Rookie Leagues started up in June, where he pitched as a starter. It will be interesting to see if the White Sox decide to send him to Kanny again or hold him back in extended spring training. ETA: 2017.