Small steps for Chris Sale are giant leaps for everybody else

The White Sox are emphasizing the "star" in "Opening Day starter," and the slider that makes him both

Share All sharing options for: Small steps for Chris Sale are giant leaps for everybody else

The White Sox are going full speed ahead with making Chris Sale the main attraction, and not just on Opening Day. They should. There's nothing like a homegrown star who is even more polished when answering questions. As far as 23-year-old ballplayers go, he's pretty much a child actor.

"My knees are shaking now just thinking about it," Sale said. "I'm definitely going to have to collect myself, stay focused and take a lot of deep breathes. The last couple of Opening Days, I've been a kid in a candy shop. And now, being part of it, it could be overwhelming, but I'm going to do everything to collect myself and stay on an even plane. You know it's going to be electric, though." [...]

"I called my dad the other day and said, 'When am I going to wake up?'" Sale said. "I'm certainly appreciative of everything. I know what's happened doesn't come to everybody."

On top of that, whitesox.com posted a video all about Sale's slider that is worth your time:

(For more video on his slider, Sale showed Brett Ballantini how he threw it back in 2011.)

This is a pretty big push to the forefront. Take a step back, though, and it's really nothing nothing new, because his last four seasons have had such wildly different beginnings.

Then you consider the wife and kid, and, well, the Onion wrote a story about Sale's type recently. Short of accepting a World Series ring or Cy Young Award, Robin Ventura and the front office will have to scramble to keep his interest at the onset of the 2014 season.

(Aside No. 1: That would actually be a terrible idea when factoring in weaker gravity. Sale's sidewinding motion would probably cause him to rotate three or four times before coming to a stop, leaving him in terrible fielding position. Bunts all day.)

(Aside No. 3: "When I was a kid in Florida, I wanted to grow up to be either a pitcher or an astronaut. All I ate was freeze-dried ice cream, just in case. Now I get the chance to live out both my dreams. How many people get to say that? I'm blessed beyond belief. I mean, this really is the tops.")

Getting back to Sale's effectiveness on Earth, his slider helps takes some of the focus off start-to-start radar-gun checks, because he pitches backwards just as well as he pitches off his fastball. But his slider velocity also dipped late in the year (from 80 mph to 77 mph), and relying on it got him in trouble a couple times in September.

There was that 76-mph slider he threw to Delmon Young on Sept. 2, which turned out to be the lowest gopher ball of the year: 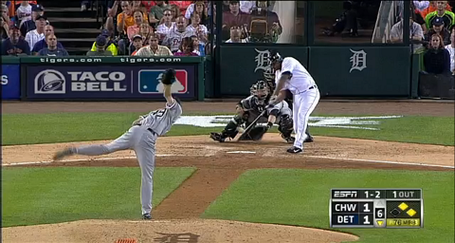 And there was his ugly last start of the season against the Tampa Bay Rays, where Joe Maddon kinda called him out afterward:

"Probably, just from his perspective, sharpness on his pitches," said Tampa Bay manager Joe Maddon, when asked for a difference in what he saw in the two Sale outings. "Same kind of pitcher, primarily a breaking ball pitcher. Doesn't like his fastball that much, so he pitches with his breaking ball. And I would say that the last start probably [was] just sharper."

There's something to that. According to Brooks, when Sale struck out 15 Rays in May, his average slider was 80 mph. In September, it didn't quite touch 77. It wasn't the driving factor in the loss, because his command was awful that day. Still, as we've seen with John Danks, slower mistakes are usually worse mistakes.

Assuming Sale is fresh, stronger and paces himself accordingly, that shouldn't be as much as a problem in 2013. But now that everybody knows his slider is his most important pitch, it's important to give it the same scrutiny that we gave is fastball last year. The Sox are counting on it. Just a little.

White Sox Outsider 2013 is now available in e-book form, as well as paperback. You can take that to the moon!