Three dominant, perfect innings against the Brewers could turn up the heat on Dylan Axelrod

By the time he struck out the side in the third inning in the exhibition game against Milwaukee on Friday, he was basically rounding the bases backwards. Santiago breezed through three perfect innings, throwing just 35 pitches even though he struck out five batters.

He threw 26 strikes to just nine balls, never fell behind a batter by more than one pitch, and he started eight of nine batters with a strike. The only first-pitch ball went to pitcher Wily Peralta. Santiago didn't miss by much, and he didn't particularly care for the call (GIF). But he came back to blow a fastball by Peralta to end his day.

Only one pitch was truly worthy of a head-shake. After getting ahead of Aramis Ramirez 0-2, Tyler Flowers called for a back-foot breaking ball. Santiago let go of it too soon, resulting in a roller up and on the outer half of the plate:

Ramirez made good contact, but he ended up flying out short of the warning track in center.

On the other hand, when it came to his fastball, location didn't really seem to matter much. He missed his spots with his heat a few times, but you couldn't tell from the results. For instance, look at this 93-mph fastball he got past Ryan Braun in the first inning:

Is that a good fastball or a bad fastball? The location is far from optimal, but Braun is a world-beating hitter who should have killed it, and he didn't. Plus, that was the second swinging strike of the at-bat, as Santiago tricked him with a good inside-corner cutter that Braun was early and over the top of for strike two.

In fact, nobody squared up Santiago's fastball. The Brewers only put two in play -- a groundout to short, and a routine jammed flyout to left -- while swinging and missing six times. He also added to it as the start went on, opening at 91 and reaching 94 in the third. He showed the same ability to add to his fastball in his 10-strikeout start against Cleveland last October, hitting 96 on his 107th and penultimate pitch. On his 108th pitch, he got Russ Canzler to swing over a changeup.

Speaking of which, his change looked pretty good on Friday. He doubled up on it to strike out Rickie Weeks in the first inning, getting an easy swing-and-miss after he barely tapped one foul to stay alive. His cutter also accomplished its goal on the rare occasion he used it. The curve appeared to be the weak link, although he threw it only a few times. I'm not convinced he disguises it well, between arm speed and arm slot. You can see a distinct release point (click the image to see the full charts): 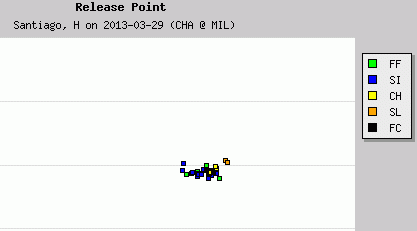 That said, if Santiago has a fastball, cutter and changeup, the breaking ball can be for show-me or lefty-lefty purposes only. And above all, his starting potential is rooted in the quality of his fastball, and whether it can stand up for multiple viewings with a similar amount of comand. The only way to find out is to run him out to the mound for several innings at a time, and if Dylan Axelrod falters, Santiago has put himself in prime position to pick up those starts. Pity this one didn't count.