The one person who believes in the 2013 Chicago White Sox

150 out of 151 national baseball experts and predictions systems have the Sox finishing out of playoff picture. Who dares to disagree?

Share All sharing options for: The one person who believes in the 2013 Chicago White Sox

Happy Opening Day, everybody. We made it. We're gonna be OK.

Now, whether the White Sox will survive the upcoming season remains in doubt -- at least when it comes to analysts judging from afar. Over at Sports on Earth, Jon Bernhardt thought he was zagging where others zigged with his prediction for the 2013 Chicago White Sox:

The White Sox are the team most prognosticators, systems and pundits alike, are going to pick to finish second in the Central, and I think they'll come very close to doing so -- within a game or two of the Indians.

This year, "most" is far from the case. In fact, third- and fourth-place predictions are far more common. It started with the PECOTA projections, which call the White Sox a 76-86 team, good for third place behind the Tigers and Indians. The Sox always scoff at PECOTA because it habitually underrates them, probably because of Herm Schneider's excellent track record.

It's the same story with the other systems. Every year, the Replacement Level Yankees Weblog runs simulations for five different projection systems. For 2013, all five predict 76-77 wins, and all good for fourth place.

But it's not just computers that dispense paper cups of Haterade for the White Sox. Neither projections nor people, circuits nor circulatory systems, are impressed with this year's club.

I went through more than 150 sets of guesses from those systems and 10 national baseball coverage outlets.

The good news: The Sox can't use the line that "nobody believes in us."

The bad news: You have to work really hard to find the guy who does.

Before we think globally, let's act locally by looking at what Rob Neyer and Grant Brisbee have to say. Two fourth-place finishes? Welp. Throw them in with Sports on Earth, PECOTA and other five systems, and this hangman starts by wearing a couple of collars.

Now it's on to the Worldwide Leader in Amassing Baseball Experts. Friend of the blog Keith Law says the White Sox will finish in fourth place with 76 wins. The good news -- last year, he thought the White Sox would occupy the cellar at 67-95. Turns out he shorted the Sox 18 wins, so if you pretend MLB predictions are taxes and he has to apply the correction to 2013, these White Sox are a 94-win team! Start printing the playoff tickets!

For ESPN the Magazine, Tim Kurkjian was more charitable with a third-place prediction. They're accompanied with blurbs from Dan Szymborski, who says ZIPS churns out an 80-win season, tied for second with the Indians.

Jayson Stark polled 18 scouts and executives for their input in his 2013 predictions column. The White Sox did not warrant a single mention of any kind, whether as a playoff team or a surprise contender.

Then you have the rest of ESPN's panel. Removing Kurkjian, Szymborski and Stark leaves you with 38 other panelists ... none of whom pick the White Sox for a playoff spot.

And on ESPN property Grantland, Jonah Keri does not issue a proper prediction, but since his best-case scenario has the Sox on the fringe of wild-card contention through Labor Day, we'll put him down for a "no."

Joe Sheehan is one of those experts. In his newsletter (hat tip to Chiburb), he pegged the Sox for 81 wins. That's a stark improvement over what he said on his podcast with Rany Jazayerli from March 26:

Jazayerli: This is a 75-win team on paper.

Sheehan: I think they're gonna come in a little lower than that, for me.

So the Sox gained at least seven wins over three days, which is neat. And we'll use this to count Jazayerli as a "no" for the ...

Here we have a very modest predictions piece -- just a table with the picks from four experts. Nobody has the Sox making the playoffs. Hell, only Dave Brown has them finishing higher than fourth.

We're heading in the other direction now, as CBSSports.com has six panelists. Jon Heyman and Danny Knobler put the Sox in third place; the other four in fourth.

No lard here, as Fox says Ken Rosenthal (third) and Jon Morosi (fourth) are all you need.

Here we have the Baskin-Robbins of predictions tables, with 31 FanGraphs contributors weighing in. Alas, they only offer one flavor, and it's called "Early October Tee Time." All have Detroit winning the Central, and nobody has the Sox snagging a wild card spot.

We know they hate the Sox, so when I see them post 42 staff ballots that average out to a fourth-place finish, there's no reason to drill down into the individual predictions, right? 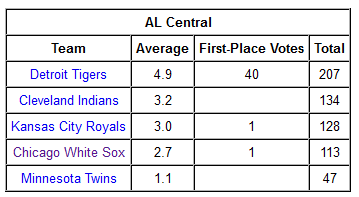 Wait a second. Zoom in on that. 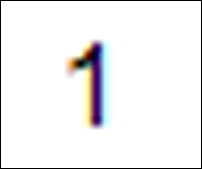 If this were Mission Control, there would be awkward high-fives and hugs abound. We have evidence that somebody thinks the Sox can make the playoffs -- and not just sneaking in via the second wild card, but actually beating the Tigers in the AL Central!

Now we have to find him. 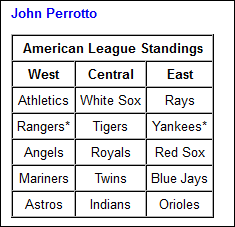