For the second straight game, the White Sox gave a former teammate with a double-digit ERA a second wind.

Perhaps the White Sox offense shouldn't give their starters a 2-0 lead. They jumped on Buehrle early, scoring one after three straight singles by Jeff Keppinger, Alex Rios and Paul Konerko, then tacking on another when Dayan Viciedo looped a base hit to left.

But Gavin Floyd, doing his best Chris-Sale-in-Cleveland impersonation, gave it right back. It was unlucky when Adam Dunn couldn't snare Emilio Bonifacio's grounder for a double, but not so much when he left a cutter up to J.P. Arencibia, who deposited it over the right-field fence for a two-run homer to tie the game.

Floyd had problems with pitches up all night. Maicer Izturis jumped on a high cutter that Tyler Flowers wanted down to lead off the second, and he also missed a low glove on a fastball and Munenori Kawasaki smoked into the left-center gap for a triple. He came around to score on Bonifacio's flyball to right, and the Blue Jays had all the runs they needed after four.

The bullpen did all it could. In the fifth, Hector Santiago defused an inherited bases-loaded threat with an inning-ending double play ball to new second baseman Tyler Greene (who didn't initially want to take it to the bag himself and nearly threw it away). Santiago threw a scoreless sixth, and Matt Lindstrom and Donnie Veal combined to take care of the seventh and eighth.

No Sox pitcher would have to work a ninth inning, though, because the Sox couldn't get to Buehrle. They had their best threat in the fifth, when Greene and Alejandro De Aza led off with singles. But Jeff Keppinger grounded into a double play, and after a walk to Alex Rios, Paul Konerko swung over a 3-2 curve to end the threat.

They had to wait for another Blue Jays lefty to take the mound before they could cross the plate again. Side-arming Aaron Loup caught a lot of Adam Dunn's jersey to give the Sox a baserunner with one out, and Viciedo moved him to third with a hot shot that third baseman Mark DeRosa couldn't handle. Alexei Ramirez scored Dunn with a fly to center, but Tyler Flowers struck out on three pitches to end the inning.

Casey Janssen then recorded the same thanks to an expanding strike zone. Pinch-hitting Conor Gillaspie seemed to draw a walk on 3-1, except: 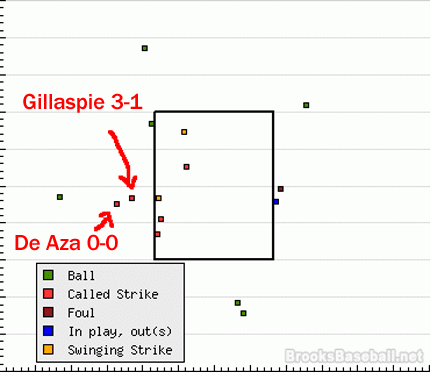 And then this first pitch put De Aza in a hole, and he struck out, too. A Jeff Keppinger groundout, and the Sox's are 1-6 on this 10-game road trip.