Wallowing in a 1-for-28 slump, Tyler Flowers spent his off day on Tuesday figuring some things out in the cages. He returned to action on Wednesday with a new stance, and it paid dividends in the form of a big three-run homer that put the White Sox on a straightaway course to a 7-0 victory over the Blue Jays.

As you can see above, Flowers opened his stance and lowered his hands a little. The first matters more than the second, since in both cases, his hands are a similar height when he starts his stride. After a 2-for-4 night, Flowers was happy to talk about the results. From Dan Hayes:

TORONTO -- Tyler Flowers had a modest goal in mind for Wednesday’s game.

He just wanted to see the ball better in his plate appearances. [...]

"I didn’t feel fooled on pitches, which was good," Flowers said. "It just felt a little more smooth, like I had a little more freedom, a little more kind of swagger, looseness feeling on all my swings today. It felt very good."

Fortunately for us, he faced lefties both Monday (Mark Buehrle) and Wednesday (J.A. Happ). Moreover, they each threw him a fastball on the outer half. Here's what he looked like against Buehrle in his first at-bat on Monday:

And here's Flowers unloading on Happ's fastball in his first at-bat Wednesday:

Yes, the stance is different. But beyond the fact that Flowers' stance is open and his leg is straighter, look at the point in the pitcher's delivery when he gets his front foot started. Here's the first frame of front-foot movement against Buehrle, who threw that fastball 85 mph: 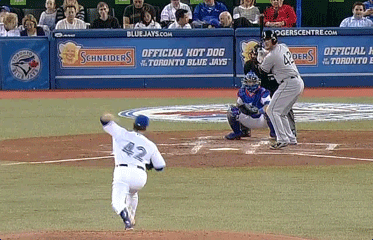 And then against Happ, whose fastball was clocked at 93: 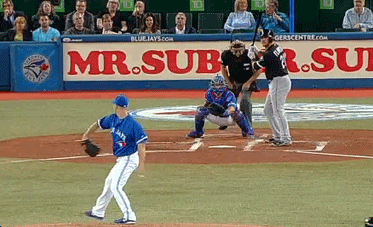 It's not really a leg kick as much as a leg swing, but it looks like the rationale is similar: Smoother leg action also gets his upper body into gear more gradually. He's been late on fastballs up throughout his slump, even in cases like the Buehrle pitch, which missed its target badly at mere 85 mph. Although Happ's fastball was 8 mph faster, Flowers was able to barrel it up and crush it.

I'm not getting too encouraged (or depressed) about Flowers at any point over the first two months, because I think he's going to run extremely hot and cold. But we'll get a better idea if this particular modification can stick as he sees more fastballs. Can he recognize upper-zone fastballs from too-high fastballs, and actually connect with the good ones? That's been his problem so far when you look at what he's been hunting: 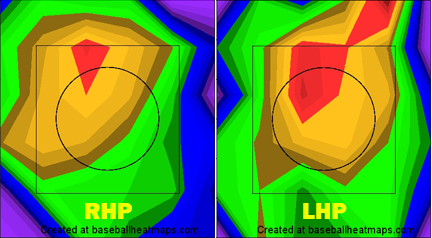 Theoretically, a smoother start means he'll have a fraction of a second longer to see a pitch, since he's not starting and deciding at the same time, but all hypotheses need to be tested.