For some reason, Rick Hahn had to explain why the White Sox locked up Chris Sale for five to seven years before he took the mound for Opening Day on Monday:

Over the next few hours and 7⅔ innings, Sale showed why he was worth the commitment, spearheading a 1-0 shutout of the Kansas City Royals. The media accounts gushed over Sale, and that underscores the point of the whole thing.

The continuing concern over John Danks is a reason to suppress enthusiasm over the Sale deal, I suppose, but there are key differences. One big one: The White Sox world is happier when Sale starts.

Danks' starts, for reasons both in his control (inefficiency) and beyond it (perpetual lack of run support), often feel like work. Win or lose -- and it's often no decision -- he has to sweat it out. A healthy Danks is worth the contract he received, but good luck trying to sell some people on that.

In contrast, even though the Sox gave Sale one run to work with, there was a sense that he could make it hold up. His arsenal and his style just looks overwhelming when he's in prime form, and the uncertain swings he generates reinforce that notion. Sure enough, the Royals only squared him up twice all afternoon, and the Sox are 1-0 after a 1-0 victory.

And here's where we note that Sale's contract has half the guaranteed money that Danks will receive over his deal. That's why it's an "easy choice."

It's especially easy when there's no need to constantly check the radar gun. The pitch data confirms the low level of concern -- he spent most of the game sitting 92-93 mph, occasionally dropping below 90 with a two-seamer, as is his style. When he hit 95 in the eighth inning against Alex Gordon, that suggested his arm was plenty fresh.

His speed readings throughout the day indicate that he paced himself nicely: 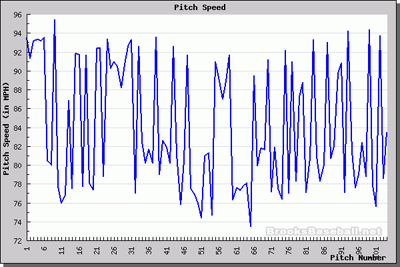 He threw more sliders than fastballs against a lefty-leaning lineup, but we also saw much more of his changeup, and to great effect. He threw seven changeups -- five went for strikes, four for whiffs, and none of them ended up in play. In the third inning against a very good left-handed hitter in Alex Gordon, you could see exactly how Sale intends to use it.

Oddly enough, it was Sale's only walk of the day, because Jerry Layne's small strike zone experienced further shrinkage on a cold day. Sale threw a good slider and a good fastball, but Layne didn't like either of them, giving Gordon a 2-0 edge (in Layne's defense Sale did turn over Tyler Flowers' mitt with a missed target on the latter). On the third pitch, Gordon sat fastball and...

Whoops. But Gordon got another favorable count when Layne declined to call a plate-splitting slider a strike (his most egregious miss on the day), giving the hitter another fastball situation. Except...

Whoops again. That should have been strike three, but Sale would get his lefty-changeup strikeout when he pulled the string on Chris Getz to start the eighth inning. You can see that one at the 1:17 mark in his highlight reel.

So that was working. Around the same time, Sale started consistently getting his slider boring in on righties -- resulting in a strikeout for Billy Butler and two for Salvador Perez. With both off-speed pitches at his disposal, Sale kept both righties and lefties off-balance. The Royals had trouble getting it to the outfield beyond soft line drives. The game was his.

He had trouble working over Kansas City last year. The Royals hit .292 against him in 2012, by far the highest of any team to face him more than once. He was able to battle through the singles barrage more often than not, but it left him with efficiency issues in four of his six starts.

On Monday, even with Layne denying both sides the low strike, Sale needed just 102 pitches over his 7⅔ innings. That's encouraging all around. Now, it'll be entirely different to do it when it's warmer and the innings start piling up, but a win's a win at any time, and especially against the Royals.