Plus: Alex Rios and Tyler Flowers are seeing the ball well, which makes two of them.

Even though he drove in two of the White Sox's three runs in their loss to Minnesota on Sunday, Jeff Keppinger's overall line took another blow.

For starters, he went 0-for-3 in four trips to the plate, which means he's been hitless in his last 26 plate appearances. That's a career "high," as he surpassed his 0-for-23 from the 2008 season.

His four plate appearances on Sunday sum up his luck.

Those are four good PA, in terms of approach. He entered the game having seen just four three-ball counts on the season, but he worked two of them on Sunday. He picked good pitches to swing at, and he put good swings on said pitches. And yet it's just another kick in his stats' nuts, coming a day after Keppinger took a fielder's choice on a line drive that dropped in front of the center fielder. Tyler Flowers misread the liner and didn't get to second in time, and it went in the books as an 8-6.

"He's doing stuff to help you win," manager Robin Ventura said of Keppinger. "He's hitting it on the barrel. It doesn't seem to be getting through, but as far as his quality at-bats, he's doing stuff you would expect him to do. It's just not finding holes."

It'd be wise to only play the "woe is me/him" card for an answer or two. He's had a lot of flaccid at-bats before Sunday, along with more strikeouts than usual, so it's easy to overstate the level of misfortune he's suffering.

But he can wallow in self-pity for 24 hours if he's so inclined. He's stuck in such a rut that even with a great day at the plate, he's still 0-for-since-Tuesday. He still has the league's lowest OBP. He still has second-lowest slugging percentage and OPS, only trailing Minnesota's Aaron Hicks -- and even Hicks managed to end his 0-for-24 slump by dinking a single to right. Baseball's a bastard.

Keppinger's ability to make contact was supposed to supplement a team that is often too reliant on favorable atmospheric conditions. But it didn't work out the last time the Sox acquired a supposedly weatherproof player to install at the top of the order.

Even Adam Dunn snapped out his his hitless streak before Keppinger -- and he only put one ball in fair territory all day.

After Hicks snapped his 0-for-23 slump in the top of the seventh, Dunn came through with his first hit in 31 at-bats with a solo shot to center off Josh Roenicke. Dunn's inability to square up all sorts of pitches had me wondering what qualified as "in his wheelhouse." Here's one possible answer: 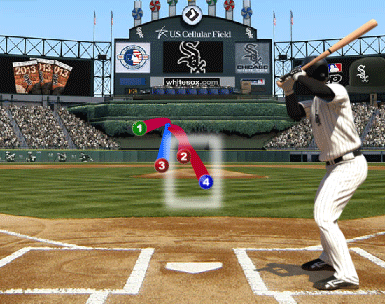 That's a 93-mph fastball on a 1-2 count, which means Dunn is finally off the schneid with two strikes. Entering that at-bat, he was 0-for-35 in all two-strike counts. The momentum didn't last long, as he struck out on three pitches in his final at-bat.

Dunn finished the weekend with six strikeouts over the two games, although that merely tied him with Alejandro De Aza for the most K's across Saturday and Sunday. Fun fact: the Twins entered the series averaging 4.9 strikeouts per game, so they exceeded their daily strikeout allotment between De Aza and Dunn alone. Overall, the Twins struck out 23 Sox over the two-game series, which is problematic.

Going back to the two-strike thing, for some context, Alex Rios is batting .286 (10-for-35) with two strikes. His average in that situation dipped below .300 after going 0-for-3 (all after two strikes), although the wind knocked down what looked like a homer to left center on a 1-2 Scott Diamond curve.

Rios, however, did reach base via his eighth walk of the year. Eight games remain on the April calendar, and yet Rios already surpassed his highest single-month total from last season. He drew seven last May, and averaged fewer than four walks in his five other months.

That's mostly a good thing, although it's possible pitchers are being more careful with Rios because Dunn is hitting a spot or two behind him. It'd be nice if Ventura tested that theory by dropping Dunn to sixth (or lower). As it stands, when a righty is pitching, Rios is surrounded by the two worst OBPs in the game, and that's just such a waste.

Flowers went 1-for-2 with a walk on Sunday, which means he's reached base eight times in the four games since implementing his new stance.

His line is back up to .229/.315/.479, which is great for April. Hell, a .794 OPS from Flowers would be an incredible end-of-season result, although given his streaky nature, another slump could be right around the corner. Chances are the average White Sox fan will hop on and off his bandwagon 12 times over the course of the season, so enjoy the upturns while they're available.