Share All sharing options for: Rays 10, White Sox 4: Some fight, but a long night

The White Sox entered this season with concerns that they were too right-handed.

They had the opposite problem tonight -- with Gordon Beckham, Dayan Viciedo on the DL and Jeff Keppinger likely missing the series with back spams, the resulting lineup was not a good matchup for Matt Moore. And when Gavin Floyd left the game early and forced the bullpen into emergency mode, that uphill climb just wasn't going to happen tonight.

Moore entered the game 4-0, and as the league's stingiest with both runs (1.04 ERA) and hits allowed (10 over 26 innings). The Sox were able to take a little bit of the shine off both numbers, but not by much. He allowed one run on three hits while striking out nine over six innings, and that actually represents a decent face-saving effort by the Sox, given how it began.

After walking Alejandro De Aza to start the game, Moore struck out the side in the first two innings. He had eight strikeouts and a no-hitter through 3⅔ innings, but Adam Dunn canceled the postgame show with an unlikely solo shot to left-center.

That would be the only run off Moore. De Aza and Tyler Greene strung together bloop singles to mount a minor threat in the sixth, but Moore escaped by striking out Alex Rios (third of the night) and getting Dunn to ground out, preserving a 5-1 lead.

The pitching wasn't nearly as crisp on the other side. Floyd didn't show much of a breaking ball over his 47 pitches, but it was a two-seam fastball to Evan Longoria that brought Herm Schneider to the mound. Hector Santiago came in didn't walk anybody (though he did hit Jose Molina above the kneecap, ending his night), but the Rays peppered his over-the-plate stuff for 10 runs and four runs over 3⅔ innings. He did throw 86 pitches, which gets him pretty closed to stretched out as the Sox ponder their Floyd replacement options. Donnie Veal and Matt Lindstrom followed him, and neither of them looked great, either.

The White Sox offense did make it interesting in the eighth, thanks to Kyle Farnsworth. Farnsworth walked Tyler Greene and Dunn, and Paul Konerko loaded the bases with an infield single that took a weird hop on Evan Longoria. Alexei Ramirez and Conor Gillaspie sent a pair of lasers back through the middle to make it 8-3, and so Joe Maddon called on Joel Peralta.

Peralta started strongly enough by striking out Tyler Flowers. But he walked Jordan Danks on six pitches (none of them strikes, although Chris Guccione thought otherwise. That put it within a slam, and Alejandro De Aza was within a couple feet of making it 8-7 when his liner found the wrong side of the right-field line. He ended up striking out, but hey, at least we have this fun fact: 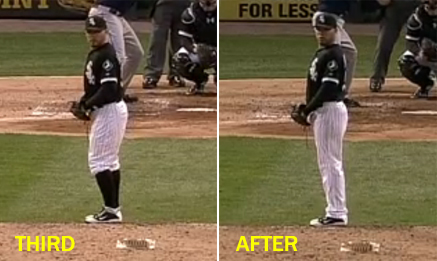