Chris Sale starred in the season-opening shutout over Kansas City, but there were other reasons to be encouraged

Some of us are thankful that the Sox had an off day after Opening Day. Some of us had a few other things we wanted to talk about, but couldn't get to because the Sox ran a pretty crazy video before the game.

OK, I'm talking about me. There were three other things I liked about White Sox pitching besides Chris Sale's all-around excellence.

No. 1: They solved Jeff Francoeur.

Jeff Francoeur was the worst regular position player in baseball last year, but nobody told the White Sox. He drew just 33 walks in 2012, but the White Sox were responsible for nine of them, by far the most for any one team (the Red Sox were second ... with five).

Their fear of Francoeur escalated to absurd heights later in the season. Sale gave Francoeur the first three-walk game of his career on Aug. 17, mostly because Robin Ventura called for two intentional walks. Hector Santiago almost made it four, but Francoeur struck out swinging at ball four, which only underscored why the first three walks were so nutty.

Two days later, they walked him twice, including another IBB. Throw in one more two-BB game on Sept. 20, and the Sox walked him seven times over their last nine games. He only went 5-for-30 over that time.

Sure enough, Francoeur started his 2013 season with two singles off Sale. They weren't hard-earned:

First at-bat? Two fastballs, both up. Second at-bat? Took a slider strike, swung at a fastball up. It was the kind of pitch selection and execution designed solely to feed their own fear.

But they changed it up -- literally -- in the seventh. Sale got a swinging strike with a first-pitch changeup, missed wide with another changeup, then came back with a two-seamer on the outside corner, at the knees.

Francoeur, off-balance, could only throw his bat at it, resulting in an inning-ending 5-4-3 double play.

His last at-bat came in the ninth inning with a runner on second and two outs. Addison Reed was tasked with getting him out. With first base open, the intentional walk beckoned, but Ventura resisted its siren song. Reed started with a first-pitch slider just off the plate, and Francouer put another poor swing on it for a game-ending 6-3.

That's exactly the kind of plate approach Royals fans have grown to hate, and the kind that the Sox haven't seen enough of. They can only point the finger at themselves most of the time.

Speaking of feeding fear, Chuck Garfien set the crap out of the stage as Reed took the mound for the ninth inning.

I asked Addison Reed during spring training for his toughest out. He said the entire Royals lineup. 1 thru 9.

Last year made for a bad combination -- the Royals are generally aggressive, and Reed's pitch selection is generally predictable ...

The normally fastball-heavy Reed threw six sliders out of his 15 pitches. In terms of break, they varied in sharpness. In terms of location, they couldn't have been much better: 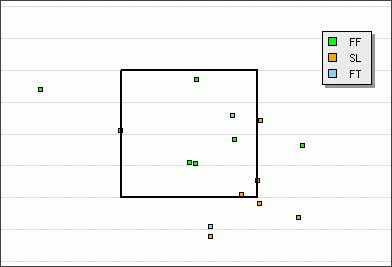 Reed had a problem getting tilt on his sliders last year, causing them to stay up and drift across the plate, or out of the zone. On Monday, five of his six sliders were at the knees or below. He still couldn't work a clean inning because Eric Hosmer extracted a walk out of him, but the 1-2-3's should start coming if he can maintain that kind of location. He's not Craig Kimbrel, but he just needs to be a legit two-pitch pitcher to make save situations less of an ordeal in 2013. Opening Day was a good start.

No. 3: Matt Thornton against Mike Moustakas.

One reason why Matt Thornton inspires an unusual amount of dread: 0-2 counts were not his friend last year.

Jhonny Peralta blasted a walk-off homer in Detroit on an 0-2 fastball last May, and Hosmer slapped an 0-2 fastball past third base for a game-winning single in September. I'll stop before it gets more painful.

Here's how hitters fared against Thornton after two strikes, compared to the rest of the American League:

Thornton ended up with more hits allowed (seven) than strikeouts (six) on plate appearances that got no further than 0-2, which is really weird. For some context, it was 16-4 in favor of strikeouts in 2011, and 17-1 in 2010.

You might not have known that fact, but you felt that fact. And when Thornton came in with runners in the corners and two outs in a one-run game, and then got ahead of Mike Moustakas with a fastball out and a fastball in ... you had a situation just begging to be dunked in Thornton Luck.

So of course this happened:

Hitters are now 0-for-1 with one strikeout against Thornton 0-2 counts. The season can now pick up where it left off.