Wednesday's victory was full of weird defense, big homers, and help from some old friends

We're two whole days into the season, so we should hesitate to say any particular development is the best or worst we'll see the season. You think you have a solid base of what's normal from years of watching baseball, and then a game like this dumps a ton of crazy crap on you.

So it's kind of pointless -- and dare I say reckless -- to assign superlatives to what could look pretty ordinary by the end of the season.

But hey, if we use the phrase "leader in the clubhouse," we're covered! Here's what went down in the Sox's 5-2 victory over the Kansas City Royals Wednesday afternoon.

Through 2½ innings, it looked like Dayan Viciedo was ready to write off Wednesday as a personal loss. He had an ugly swinging, fishing strikeout in the bottom of the second, and the top of the third had more bad news in store. He collided with Alexei Ramirez, and it appeared that Viciedo was to blame, because there was no evidence he called off the waving, yelling shortstop. Then he booted a ball when trying to pick up a single, so an entire trip around the bases was on him.

When he returned to the dugout, catharsis:

Kinda anticlimactic, since he picks up after himself promptly. Unless Daryl Boston is more soothing than we can possibly imagine, this can be topped. Fortunately, Viciedo made up for it when he hit a two-run homer that triggered ...

Credit Alex Gordon for giving it his all with his Ichiro-like effort. He didn't catch the ball, but he fooled Harrelson. The transcript:

And heeeeee wiiiiiiillllllllll ... Gordon baaaaaack at the feeeeence ... looks up, you caaaaaaaan -- NOOOOOO, he makes the catch! [pause] No, it's a home run, you can put it on the boooooooooaaaaaaaaaard, YES!

Hawk is no stranger to having his emotions manipulated, so he should out-do this, although it might take a while.

Ervin Santana, on the other hand, set the bar pretty high with the gopher balls he served up to Adam Dunn in the second inning, and Tyler Flowers in the third.

Then again, maybe we should use the singular, because they were practically the same pitch. Click on the freeze frame for the video: 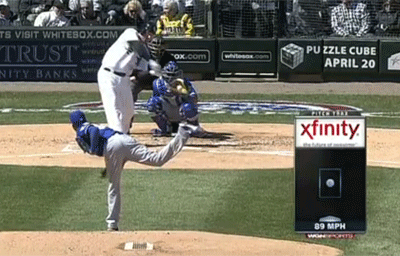 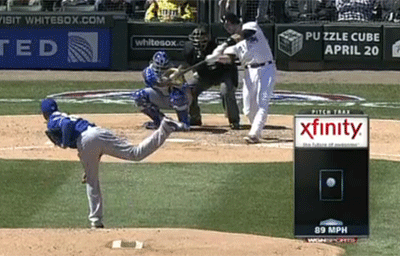 It looks like Dunn's was a little closer to the definition of "center cut," but man, there's something primal about Flowers' contact. Whenever he gets a hold of one, I want to throw my couch through my window or something.

I hadn't been keeping tabs on Eduardo Escobar, so I was unaware that he broke camp with the Twins. Then again, you could basically write him down for a fine spring, since he's King of the Short Season.

Be glad he did, because he delivered the game-winning double against the Tigers on Wednesday, with a slight assist from the Detroit defense:

Then again, Escobar's competition isn't exactly stiff. Brent Lillibridge has started his Cubs career by going 0-for-6 with four strikeouts, including a big backwards K with the bases loaded and one out in the Cubs' 3-0 loss to Pittsburgh.