Predictability may still be a problem for Jose Quintana

Share All sharing options for: Predictability may still be a problem for Jose Quintana

Jose Quintana spent at least some of spring training working on his arm-side command. The fifth inning on Friday night showed why he (still) needs to improve it.

Quintana failed to retire any of the seven batters he faced, although he dropped an imperfect Paul Konerko toss on what should've been a 3-1 putout.

The contact Quintana allowed wasn't exactly pure, so if you didn't know any better, you could write it off as "unlucky," or negative momentum snowballing after the error. That's what Quintana said through his translator after the start, and Robin Ventura agreed.

But then you look at how the righties approached him that inning, and they definitely had a plan:

The common thread: In four out of five at-bats, Seattle hitters came to the plate ready to bring their hands in at the first hittable inside fastball they saw, and Quintana couldn't knock the bat out of their hands.

Gutierrez is the exception, although mostly because Quintana got the chance to throw five pitches. His first four were all on the inside corner or more in. On the fifth pitch, Tyler Flowers set up outside for an attempt at the backdoor curve, but it drifted over to the inner half, and Gutierrez was able to turn on it. 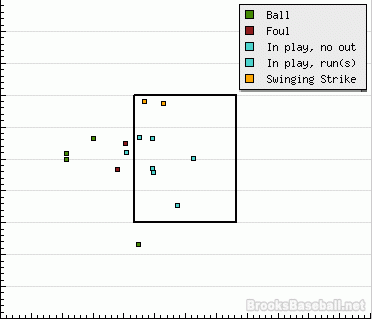 The lone pitch on the other side of the plate -- and it barely qualifies -- was the cutter that lefty Michael Saunders roped into the right-field corner for a triple. Otherwise, Quintana used only half the plate, and the Mariners needed to see just 15 pitches over seven batters to do an awful lot of damage.

In both the suddenness and symptoms of the assault, it was very similar to his abbreviated loss to Baltimore on Aug. 30 last year. After cruising through the first 2⅔ innings that day, the Orioles jumped on him for a homer-double-double-homer-double, resulting in a quick four runs before Quintana could get the third out. The pitch map for that inning looks pretty similar, although he did occasionally try the other side.

Quintana's rough 2013 debut continues the story from last year, which developed as he began to tire while the league built a book on him. It sure would be great if he could ever develop something softer away to righties. As it stands, if his command is pristine, he can give the Sox a good six innings, but without a way to give hitters a different look the second or third time through the order, each start may have him tip-toeing along a slippery slope. Perhaps Flowers or Hector Gimenez will give him more outside targets, but given that neither Flowers nor A.J. Pierzynski could commit to that side of the plate last year, maybe they have conceded that Quintana is better off living and dying inside to righties.

Dylan Axelrod's start from Saturday provides a good contrast to Quintana's outing, because his lack of a good fastball forces him to mix up everything. Pitch f/x picked up five different pitches thrown at least 14 times each, and the chart looks like somebody sneezed on it, which is a compliment. You'd have an All-Star pitcher if you could combine the two of them, and probably some gross leftovers.

Axelrod threw 5⅔ innings against the Mariners and allowed just one unearned run, and that would be the most you could expect from Hector Santiago, so Axelrod held serve there. Novelty was on his side, as Seattle had never seen him before, so hey, my theories from from last year about Axelrod and Quintana are both still in play.