Divinity on the diamond

The ineffable love for a mathematical game

Share All sharing options for: Divinity on the diamond

Like clockwork, she divinely descends as the days dare to drag.

Just as the cloying winter was re-grouting the cold tiles of your innards, THWACK! - the ball flies hotly off the bat to left field, in your team's extra-inning walk-off winner. The cosmos once again feel aligned. The sun-kissed thighs of summer are already wrapped around your head in a sweetly strangling caress, making you delirious for more.
Baseball!

My excitement for Opening Day is unsurprisingly met each year by the twisted faces of non-believers, seemingly uncomfortable by the thought of that many baseball games. Have you ever noticed how people who don't follow baseball can't remember how many games a team plays, beyond the vague concept of waayyytoofugginmany? I know most people around me (us) don't get it. It's cool, I'm not trying to sell them a Book anyway.

Many times I've caught myself talking about baseball in spiritual terms. Baseball takes on a sort of mystical passion for me. I've been thinking about this intangible connection, this heart and soul of such a heady sport (and increasingly so, as new statistics paint a greater mathematical understanding for us); and it only reinforces how much I love this game in all of its dichotomies. The measurable and the fantastical. The real-time sensations and the nostalgia. The smells and sounds of a ballpark and the conversations with a friend or stranger nearby.

On separately inspired occasions this week, I read two baseball-related writings that struck hymnal chords for me. The season commencing is obviously a spiritual thing for many of us and I wanted to share both of these links in hopes that you'll read them, if you haven't already.

The first writing is one of the best things I've read in some time, called The Boys of Lancaster by Kent Russell, published March 20th in The New Republic. If this hasn't crossed your eyes in the three weeks since its release, please make like Tonto and jump on it.

Russell eloquently examines the experience of baseball among the Amish. His writing triggers wonderful considerations of how differently this pastoral subculture of America interacts with the same sport that the rest of us know, love, and maybe take for granted as we chug beer through our adult coed softball leagues, for example. He relates the preservation of Amish beliefs and the concept of simpler times, to how baseball has been preserved in a world accelerating past its pace and attention span.

The Amish banned baseball in the mid-90s, so only young men in their Rumspringa may temporarily bite into its forbidden fruits. Russell describes the unrefined yet effective mechanics of the Amish players in a way that mimics the carefree moment in their lives:

He was a new teen whose taut physique had him looking like a system of ropes and pulleys. He stroked a ball over my head, laces hissing. When I sneaked back a few minutes later, he was fielding impassively, scooping and throwing with kinesthetic tics I remember having once, when I was little and in love with the game, before coaches smoothed all that out. They made him seem more authentic, more faithful to the form, like warps and bubbles in handblown glass.

The Amish seem to play weightlessly, yet focused; without the mental anguish that can slump good players. Without the coaching that "fixes" the tics. And most ironically, without the weight of a world bogged down by tantalizing freedom. I cannot recommend this article enough.

The other writing is a Slate book review by Scott Korb, posted last Friday, called Perfect Game. This is a considerably shorter read highlighting the finer points of a new book by John Sexton called Baseball as a Road to God. This piece is geared more toward the divine elements of the game, as Korb quotes Sexton:

"In the basement of my family's home, my friend Bobby ‘Dougie' Douglass and I knelt and prayed with all the intensity we could muster, grasping between us in dynamic tension each end of a twelve-inch crucifix we had removed from the wall. ... We prayed before a radio instead of an altar, which broadcast the sounds of Game Seven of the 1955 World Series instead of hymns. ... For three innings, time had slowed; but in that moment it froze: The Brooklyn Dodgers had won the World Series! Seven decades of waiting were over! Dougie raised his arms in exultation, releasing the crucifix, whereupon the laws of physics drove the head of Christ into my mouth, chipping my front tooth. I wore that chipped tooth, unrepaired, as a visible memento for nearly fifty years."

In reviewing the book, Korb discusses that intangible and ineffable love for the game, how baseball forces us to slow down and live more, and the ability to save a bad day (and ruin artifacts) with a game of catch. This is a topic to which my mom and her now-scuffed Nolan Ryan-autographed baseball can relate. Like Korb, my sister and I simply had to toss a ball in the rain that day. 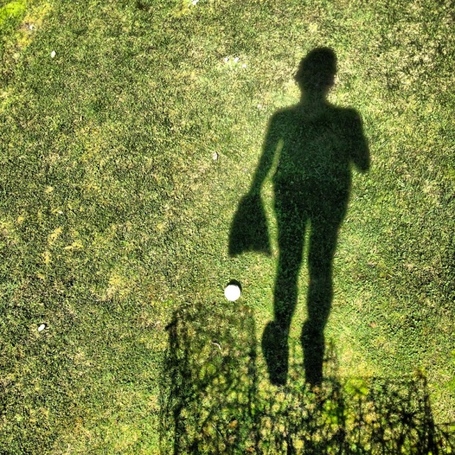 Pictured above: My first game of catch this spring - and boy did it feel good.