Eight starts in, Chris Sale is right on track

Share All sharing options for: Eight starts in, Chris Sale is right on track

Chris Sale reached the quarter pole of his second full season as a starter in rather ho-hum fashion. All he did was one-hit the Angels for his first career shutout, needing only 98 pitches to do it.

Here are the highlights, if you missed the game for some stupid reason:

When you look at Sale through eight starts in his first season to the second, his Cy Young stats are a bit diminished, but nine shutout innings almost has him caught up:

However, look beyond the slightly worse ERA and strikeouts, and you'll see signs that he's taken steps in his development.

After throwing 192 innings in 2012, Sale is on pace for 224 innings this year. That's probably the high end of his range, because if the Sox are eliminated earlier than they usually are, Robin Ventura shouldn't feel a need to whip him to the finish line. Optimistically, if the Sox do need him at full-power for 32 starts, he's on a better pace to sustain it.

Sunday night was the first time all season that Sale really had full command of his slider. He'd caught Jose Quintana's inability to spot it on the outer half to righties, although Sale has that changeup to cover for the absence of a breaking ball on that side of the plate. His shakier command has made him a little more susceptible to the long ball than usual, but if he can summon the same kind of control in his next start, he might be able to rattle off a few similar starts.

But it also helps that he's confident in his fastball. The average velocity doesn't tell the story, because it's about the same through eight starts:

However, he's been a lot better at maintaining his best fastball, whether on a start-to-start or inning-to-inning basis.

By this time last year, a drop in velocity foreshadowed Sale's first dead-arm period of the year, prompting the Sox to give him a breather in the clumsiest fashion imaginable. This year, we haven't spent much time focusing on velocity, because he's not giving us any reason to.

Heck, he's not even tiring in games. During the ESPN broadcast, Orel Hershiser said that Sale would work around 94 in the early innings, but that he'd end up around 91 as the game went on. That was the case last year -- look at his velocity chart from his eighth start last year (he threw 96 pitches, which is convenient), and you'll see a gradual decline in his regular fastball as the game went on: 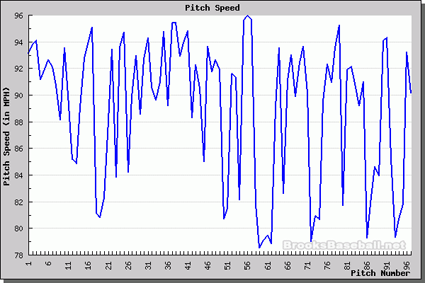 But look at what he did against the Angels: 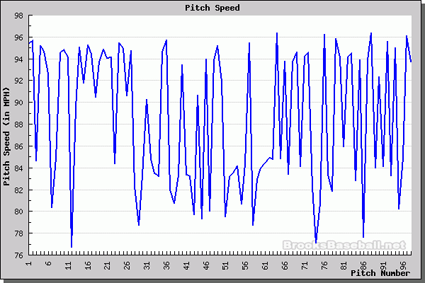 We'll see if he can keep this up into the dog days, but let's just say that if Sale can always find 96 when he needs it, hold onto your butts.

We should give a little credit to Dylan Axelrod and Hector Santiago, because their sturdy work in replacement of two proven starts has allowed Sale to take the mound with the fullest rest possible. Sale used those extra days to his advantage last year:

Sale's splits don't quite match it this year, mostly because he threw that stinker against Cleveland on five days' rest. But now his best start of the season -- and his career, by game score -- also came on five days' rest. From all that can be derived from this limited amount of starts, it's best to let Sale use every scheduled rest period until proven otherwise.

With the rainouts and injuries, Ventura had sufficient reason to keep Sale on a strict every-five-days schedule. But Axelrod's resilience and Santiago's unbelievable flexibility give Ventura the confidence to keep Sale on an every-fifth-turn track instead, without suffering much of a drop-off.

Granted, with the lack of offense, any decrease in quality might mean the difference between a win and loss right now. But there's no point in wringing every bit of quality out of the pitching staff now when the current level of performance will be needed all season. That's especially the case for Sale, and at the moment, the returns on his maximum freshness are refreshing indeed.