The free-swinging Tank returned from the DL a more selective hitter, and it's not the first time

Share All sharing options for: Dayan Viciedo, paragon of patience

Back in July of 2011, Dayan Viciedo reaggravated a thumb injury that he suffered during spring training. It interrupted what was a dynamic season at Charlotte, and when he came back, he returned a vastly different hitter.

It's pretty easy to spot when the injury occurred when you look at his monthly splits from firstinning.com:

Viciedo's free-swinging firepower was replaced by sudden selectivity, and that development followed him into the majors when he replaced Carlos Quentin at the end of August. He drew nine walks over 113 plate appearances, after walking just twice over 106 PA the year before. It made quite the impact on his OBP:

Tim Laker, Viciedo's hitting coach in Charlotte that season, didn't think the thumb injury was the primary cause of the transformation. However, we're seeing the same thing happen to Viciedo since he returned to action this past week. Here's how his season breaks down before he strained his oblique, versus after he came off the disabled list:

They're not lucky walks, either -- they're the result of a nice approach that's working for balls in play, too. Take his last at-bat on Sunday. He got into a full count with good takes and good swings. 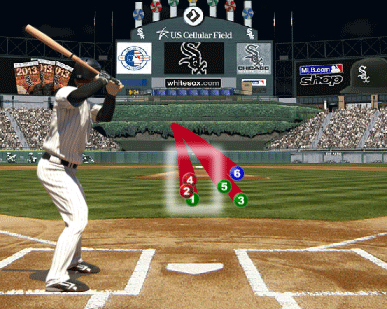 He was a bit overzealous protecting on two strikes, but he was able to cover away (and then some), turning it into a productive out-of-zone swing:

My biggest disappointment with Viciedo's development isn't the lack of patience, but that his hitting zone is so small. It was obvious that he wasn't going to draw a lot of walks, but his ability to put good swings on all sorts of pitches was supposed to cover for it. That hasn't been the case, because his massive swings have been easy to exploit up or away.

So far, the eye test suggests that Viciedo has returned to the lineup with a little more restraint. He insisted that wasn't the case, but if I'm remembering the ESPN broadcast correctly, Robin Ventura said he thought the oblique injury may have encouraged Viciedo to tone it down a little.

If Viciedo remains under control for longer than a weekend, I imagine we'll get more conclusive answers from the parties involved. For the time being, he's merely an unlikely oasis of patience in a desert bereft of pitch recognition, and the idea that he needs to wreck himself before he can check himself remains merely a theory.