Share All sharing options for: Adam Dunn sees success by looking away

Going back through old clips of Adam Dunn to see if I could see anything ostensibly different about his swing, I came across this homer against Tanner "We Named The Dog" Scheppers on April 30:

We highlighted him before the game as a guy in the last four games who has started to swing the bat a whole lot better.

Dunn extended his hitting streak to five with that solo shot, which was the third homer over that period, so nothing that Stone said was wrong. Hindsight just isn't kind to it. Dunn's hitting streak ended the next day, and he fell into a 3-for-32 slump that came to resounding end with his performance on Wednesday afternoon.

Dunn's last four baseball months have followed this same rhythm. Sox fans want every Dunn breakout performance to be like the climax of The Shawshank Redemption -- but every time this Andy Dufresne emerges from the sewage line, it's only to transfer to another 500-yard pipe. And who knows how many after that. It's hard to muster much enthusiasm in following this story when history shows the upside merely grants you a respite from holding your nose.

"Is this time different?" is always the question, and the answer is usually, "Not really." But as long as Dunn remains important to the Sox's plans, it's a question that should be examined with the freshest eyes possible.

This time, there's supposedly a mechanical adjustment behind it.

Hawk Harrelson spent a lot of time the past couple days talking about changes that Dunn made with the help of Jeff Manto, holding his hands higher, and in a way that keeps his top hand more involved. I'm not seeing much of a difference myself, at least in a way that's GIFable. Basically, to whatever extent he has changed his swing, I'm not qualified to assess them.

What does look different to me is the direction of his flyballs. Here's his batted ball chart from 2013 -- the link should update automatically when the database does, but the image below has my estimate of his Wednesday plots in larger circles: 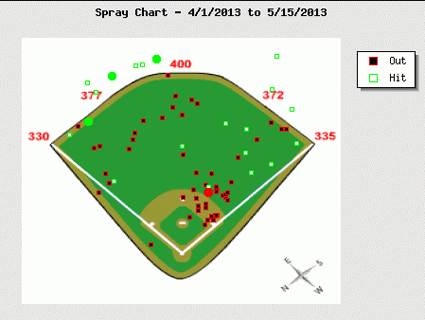 Six of his last seven home runs have been to either center or left. That's a big change from last year, when about 26 of his 41 homers were to the pull field.

While I don't see any big change in his mechanics, I do see that Dunn has changed his target zone. You may remember Dave Cameron's post at FanGraphs detailing Dunn's increased aggressiveness on pitches middle-in, and that those pitches weren't doing him any favors. 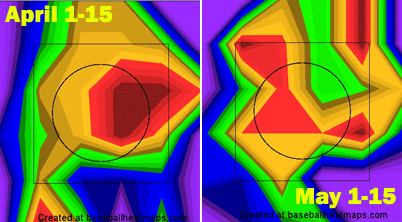 He's shifted his go-zone from middle-in to the other side of the plate, and he feasted on it against Minnesota. It's the common thread in all his highlights. If you care to peruse them, here's the video with the Brooks chart of the at-bat:

The third and fourth charts were Dunn's second and third plate appearances against Mike Pelfrey. He hit the home run on the eight pitch, and the double on the 10th pitch. That's a lot of pitches, so if you combine the charts, you'll get a good idea of what the Minnesota scouting report said: 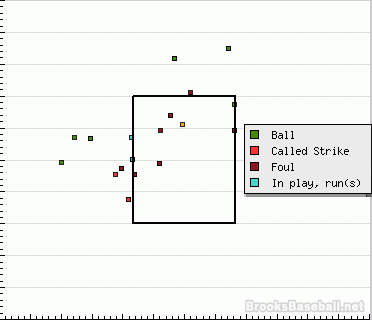 So when you add it all up and return to the original question -- "Is this time different?" -- I would give you a tentative "yes." But I'd also say the effects may be short-lived.

Perhaps it's taken him a while to realize that his present bat speed and/or swing mechanics makes him better aligned to drive outer pitches than inner pitches. If my practice swings are correct, the whole idea of a stronger top hand would help deter him from dipping the bat head while extending his arms, which would theoretically result in fewer pop-ups.

However, if his success at Target Field comes down to pitchers with unimpressive stuff and outdated intel -- well, he might find himself with fewer pitches to drive when the league revises the book on him, and then he's back to Square One. Dunn's problems have very little to do with pitcher quality, though, so at least we can set that aside for now.

More significantly, if he emerges from this series with a stronger idea of the pitches he can destroy, that automatically puts him in a better position to contribute on a more regular basis, especially compared to the way he started the season. That may still not be nearly enough if and when the Sox have a clearly better option for his playing time, but we know from experience that Dunn's triumphs are to be relished no matter the size, because there might be another 500 yards of the unspeakable right around the corner.