From his body language to his spray chart, it's been a rough month for the White Sox captain

Share All sharing options for: Paul Konerko shows all signs of slumping

Amid the carnage of Saturday's demolition derby with the Los Angeles Angels of Anaheim, Paul Konerko came through with his first multi-hit game in two weeks. He entered the day batting .188 over his previous 20 games, and Robin Ventura thought a solid 3-for-5 day might be what the doctor ordered:

"You get angry with yourself when you go through that and you want to do more,’’ Ventura said. "But you hit a day like [Saturday, when Konerko was 3-for-5], where he realizes the way it feels when he does it. So I think it was a positive sign of his mentally coming out of it yesterday.’’

Konerko also thought it was a good day to build off of:

"It was a good day to build off of, yeah,’’ Konerko said.

But progress came crashing to a halt with another 0-fer on Sunday. It was 1-for-4 in terms of quality -- he lined out to third in the fourth inning -- but that wouldn't do much to improve his .211/.262/.246 May line. Moreover, Konerko's body language tells us that he's not close to where he wants to be. After his second-inning popout:

And after his sixth-inning groundout:

And that was part of a larger body of ... work. As gnix said with the first comment after Sunday's game, "I’ve never seen a player mope as much as Paulie did this weekend."

A struggling Konerko might be the saddest sight in baseball, because nobody wears a slump harder. Remember when Alex Rios and Adam Dunn were criticized for looking too nonchalant during their historically awful 2011 seasons? It never really bothered me, because Konerko's reactions are the polar opposite, and I don't think that does any good, either. He's endured some awful production blackouts in his career, so it's hard to make a case that over-caring helps.

(Oddly enough, he's also the opposite of his protegé Gordon Beckham. Hawk Harrelson likes to say that Beckham loses his "childlike qualities" when he's slumping, whereas Konerko strikes me as somebody who was born a grown-assed man, and these displays are as close to adolescence as he's ever been.)

Take the displays of disgust off the table, and his spray chart from the last two weeks is the visual that's most troublesome to me: 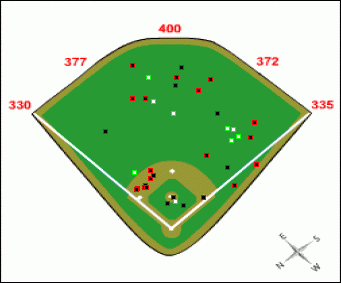 I've updated the image to include Sunday's output, which includes that lone dot in left field. When Konerko is off, all his pulled balls are grounders. Hawk Harrelson tried to find solace in some of them being hit firmly, but if everything stays on the ground, it still means something is off.

If you're an optimist, this doesn't necessarily mean that Konerko has lost bat speed, because he's battled this same problem numerous times in the past. If your glass tend to be half-empty, we've seen this problem last months -- and there's no reported injury underneath it this time.

On the other hand, if you enjoy weird trivial twists, he's had two legitimate infield hits over this time -- which is two more than he had last year. Jeff Sullivan GIF'd Konerko's infield hits from 2012 and determined:

You can throw the first sentence out. On Thursday, a diving Erick Aybar could only knock down Konerko's grounder in the hole. On Saturday, Joe Blanton knocked down Konerko's liner, but it deflected toward the right side, and Howie Kendrick had broken toward the middle in the original direction of the liner. None of those fit the four categories outlined by Sullivan, so there's that. Neither Aybar nor Kendrick made an effort to get Konerko at first once collecting the ball, though, so there's also that.

But those aren't the kind of hits that are going to shake Konerko out of his slump, and the singles to right won't provide lasting comfort, either. Until he can start hammering balls to left field, we'll likely continue to see plenty of this: