Paul Konerko returns to form by returning to left field

Successful night includes first home run of May, but will this swing stick around?

Share All sharing options for: Paul Konerko returns to form by returning to left field

Hawk Harrelson disappeared for a notable stretch of time over the last inning of the White Sox's 6-2 loss to Boston on Wednesday. Outside of a brief bulletin about the pitching staff's ninth walk of the night, Steve Stone rode solo for most of the inning.

But after the about-to-be-demoted Donnie Veal gave up a two-run single to Daniel Nava for the Red Sox's final two runs of the evening, Harrelson returned with some perspective he hasn't been about to find through the first quarter of the baseball season:

Here's where baseball rationale comes into play. You gotta have it. [...] In this case, you say, "Well, before they got here, would you take 2 out of 3 from Boston?" Absolutely. You gotta have a short memory in baseball."

Harrelson and Stone talked about taking positives away when a team ultimately accomplishes what's needed in a series, and both praised the effort of Hector Santiago. Harrelson couldn't resist making one more note about the bullpen's control, but when a losing proposition (Santiago and the bottom half of the bullpen vs. Clay Buchholz) loses, there's not much to bemoan.

It's just a shame Harrelson wasn't around in the bottom of the night for what I thought was the biggest positive takeaway from the game.

Paul Konerko went 2-for-4, which broke a three-game hitless streak. But the way he attained that multi-hit game busted him out of a couple other ruts.

His ninth-inning homer off Andrew Bailey was his first since April 28. But even that's charitable, because that homer broke up a small drought. All in all, he cleared the fence just one time mover his previous 119 plate appearances.

Better yet, Konerko's homer -- which happened when he turned on an inner-half, 95-mph Andrew Bailey fastball -- went out to left field, giving him a 4-for-4 night in terms of pulling the ball in the air.

I wrote about it a couple days ago, but that was the single most concerning symptom of his slump. There are some hitters -- Dayan Viciedo, Tyler Flowers, and Alex Rios to some extent -- who need to reacquaint themselves with right field or right-center when bad times roll in. Konerko isn't one of those guys. It's great when he can steal hits to right when pitchers aren't giving him anything to pull, but he's not going to be that middle-of-the-order threat if he's not turning on pitches, especially the fastball.

You can see that void in left field over the last two-plus weeks, occupied by one jammed pop-up toward the line ... 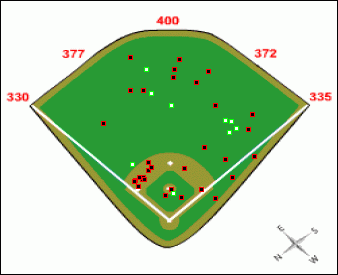 ... but after a lineout to left, a lined single to left, a drive to the warning track in left-center, and his solo shot over his team's bullpen, that little red dot finally has some company -- and a couple of them are green.

It'd be putting the cart before the horse to speak of his slump in the past tense, because there's a lot of May he's yet to make up for. Still, it was nice to see the slumped shoulders disappear, replaced by another development we hadn't seen in quite some time: