Taking a look at walk rates over the course of Floyd's career seems to illustrate more or less when and where he started feeling the effects of injury in his elbow. 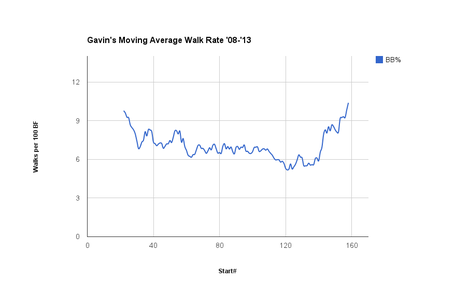 For the sake of reference, I put together a graph to give you some idea of how long Gavin Floyd has been trying to fight through this. The spike in the graph dates very clearly to around the time when he first went to the DL last year.

Just to clarify what you're looking at: I took every start from 2008 onward and created a moving average of his walk rate with a step of 22 starts. So Start No. 1 is his first of 2008 and the last one is Start No. Whatever from 2013. Why 22? Because that gives you approximately 550 batters faced per step averaged. Why 550 BF? Because, loosely, that corresponds with what Russell Carleton found is the point where walk rate stabilizes.* Yes, it is somewhat arbitrary. No, this is not definitive. The value of this chart is more along the lines of this.

Unlike, say, John Danks or Chris Sale, nothing really jumped out to me watching Floyd, even though he clearly had problems in 2012, and they were definitely elbow related. His mechanics seemed more variable and he went through extended bouts where one pitch or another wasn't working. But reading back through the SSS archives, we assumed that this was just Gavin as we had known him. Just, y'know, a little more extreme.

In the same way that I assumed Danks would more or less back to his old self by about now, I assumed that Gavin's elbow trouble was just a blip. Considering the Sox history with Tommy John-type injuries, it seemed a solid assumption. But, again, this speaks to exactly what we're trying to do here in assessing the Sox' capacity to keep guys healthy. What exactly is it that they're doing? Looking back through the timeline, it doesn't seem to have worked here. But the fact is, it's basically a black box we're dealing with. All we have is input and output. This can be very misleading and, without a good theory of what it is Herm Schneider et al. are doing to create this output, we can't be sure.

Don't fall into the trap of thinking about an empirical finding as "right" or "wrong". At best data provide an imperfect guide. Evidence should always shift your thinking on an issue; the question is how far.

*Technically, and if he's got a google alert for his own name maybe he'll tell us if I've got this right, what he did was take data for pitchers and divided that data into halves and then checked to see how well the halves correlated. He did this at a number of different sample sizes and found that at about 550 batters faced, the correlation between the two halves was .5. Meaning that given that number of batters faced, we can judge the true talent of that pitcher's walk rate to be the average of the measured walk rate and the league mean. At least that's what I can recall at this juncture. Readers of this end note will be wise to remember that I have still not taken an actual statistics course.

**Since the byline on the article is actually Justin Wolfers and Betsey Stevenson it could be either or both writing. But the idea of a quote coming from two people I think lends a certain confusion and takes away from the punch of the quote. I also like end notes and being technically correct, so here we are.