Jeff Keppinger still hasn't drawn a walk, among other problems

It's hard to say why he's struggling this much, but here's one guess why

Share All sharing options for: Jeff Keppinger still hasn't drawn a walk, among other problems

Back in 2011, Brent Morel was on the verge of making a dubious kind of history. He had forged 105 plate appearances deep into the season without drawing a walk, putting him within one full free-swinging day away of tying (or passing) Mike Colbern for the most walkless chances to start a season (108 in 1978).

So all eyes -- or maybe just my eyes -- were on Morel as he walked up to face Texas' C.J. Wilson on May 25. Sure enough, Wilson threw his first three out of the zone, and it seemed like Colbern's odd, potentially uncomfortable place in White Sox history would remain intact.

He only made two plate appearances that day, as he was lifted for Adam Dunn in the eighth inning, so he would have to wait. But eventually he did smash the "record" until drawing a four-pitch walk from Jon Lester five days and 10 plate appearances later.

But it may not stand for long, because his replacement is sticking to the script more than his employers would like.

In the ninth inning on Monday afternoon, Jeff Keppinger faced Royals closer Greg Holland on the verge of matching Colbern's old mark. And just like Morel before him, it looked like a pitcher would have mercy on him before he could reach that line. Holland missed with his first three pitches, running the risk of putting the first batter on base.

So now Keppinger owns a share of second place, which probably wasn't his goal. And he's in pretty good shape to beat Morel on his current track, because he's put up less of a fight. That Holland battle was just the eighth three-ball count Keppinger has seen this year, whereas Morel had experienced 10 of them by the same point in the season.

And beyond the number of pitches he's seen, there's the matter of what he's done against said pitches:

Since I hadn't seen too much of Keppinger before this season, I lack context in understand what his deal is. I thought that back-foot kick-out part of his swing might be a factor, because it's rather unusual. But look how much his feet slide on this swing from last year ...

... when he took a Chris Sale slider deep last September. Going through his highlights, it's a pretty consistent feature on breaking balls.

If there's one difference I can see, it's that Keppinger's feet look a little more grounded on fastballs last year. On this 3-2 fastball from C.J. Wilson (now an Angel) on April 26 last year -- one he took to right field for a double -- his back foot is still mostly intact: 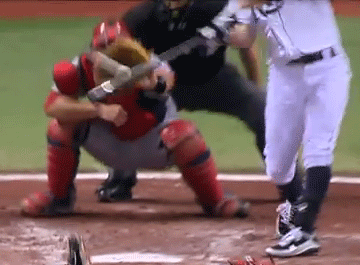 But when he takes this Greg Holland fastball the same way, his foot is up and well behind him at the point of contact: 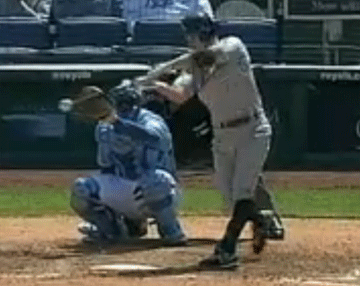 Since I have no background in teaching hitting or swing mechanics, it's highly possible I have no idea what I'm talking about. But I've watched Keppinger fail to sting the ball for more than a month, and if you put a gun to my head and demanded the correct answer -- and please don't, because that'd be a terrible way to die -- all I'd have is, "he's only arms by the time bat meets ball." He hasn't been effective, and that's why his swing looks ineffective to me. Too simple? Maybe.

But as Gordon Beckham gets closer to returning, it's Keppinger who may be under the gun instead (segue!). Conor Gillaspie's regression has been gentle, with a plate approach that has yielded a walk in each of the last two games. That's two more than Keppinger has this season, and if he doesn't show something by the time Beckham comes back, he may not get too many more chances to lift his OBP above his batting average afterward.