From seeing it slow motion to watching him throw it to lefties, his start on Tuesday night gives us plenty to dissect

Share All sharing options for: Fun with Hector Santiago's changeup

Over the course of a season, I'll watch the opponents' broadcasts for maybe 40 percent of the schedule. The lack of familiarity with the commercials is one reason (especially in Canada), but more than that, I like seeing what other features and gimmicks fans get to enjoy/endure as part of their broadcast.

I used to be most jealous of the robust pitch-tracking displays, but Comcast and WGN are better at breaking it out for questionable pitches. So now I'm only left to wish that the White Sox broadcasts really made an effort to use slo-motion footage for specific analytical purposes.

Here's an example from SNY, the Mets' regional sports network, during Tuesday night's game. Ron Darling is their analyst, and he's good at dissecting pitching, pitchers and pitches.

Hector Santiago intrigued Darling quite a bit, so it was fun to see and hear Darling get up in his business. He went beyond the screwball, too. Darling said the way Santiago didn't use a lot of lower-body drive reminded him of Wilson Alvarez, and thought he was too amped up to disguise his changeup effectively early on. He could see Santiago tipping his change, not because he slowed his arm down, but because he rotated his body faster than he did for his fastball.

Just as Darling was telling Gary Cohen how to tell the changeup and screwball apart, Santiago threw a really good change to Lucas Duda, and it should've ended the first inning:

Santiago eventually retired Duda anyway, and when the broadcast returned from the commercial break, the booth immediately went to the slo-motion replay of the changeup in order for Darling to show how he can identify it, and how Santiago throws it.

Here's a GIF of the footage:

The circle change, that is the key. (grip highlighted) See? The circle formed? And that's what you do with those three other fingers on top of the ball. And you watch his arm pronate -- look at that elbow lead, and then the flip over the forearm, and the thumb and fingers. You gotta be a strong person to do that over and over.

And all this was described before Matt Harvey threw the first pitch of the inning to Adam Dunn.

The repetitive nature of the White Sox games this season encourages repetitive broadcasts, and I've found myself mentally -- and occasionally verbally -- finishing Hawk Harrelson's truisms right along with him. So it's nice to have an option to be able to flip to another audio track, especially when it's a good analyst who is interested in what he's seeing, and he has the desire and technology to really dig into it.

But Darling still left some territory uncovered when it came to Santiago's changeup. One thing that stood out from his start on Tuesday night -- he really attacked lefties with it.

That's not to say this is fantastic newness. We've spent a couple posts looking at the way Chris Sale has introduced his change to same-handed batters, so it might be something that all Sox southpaws with good changeups are being encouraged to adopt.

But it's not new for Santiago, either. He faced almost all righties in his last start against Texas, but before that, he saw plenty of lefties when pitching in long relief against the Rays on April 27. He threw 10 changeups in 43 pitches to Tampa Bay left-handers, and here's the Brooks chart to prove it (I re-colored the changeups from navy blue so they'd stand out more). 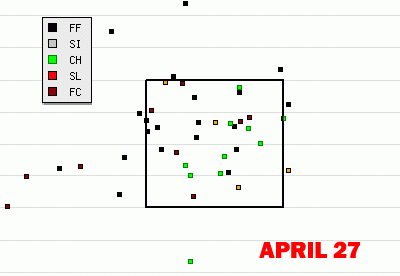 On Tuesday night, he threw eight changeups out of 37 pitches to lefties, so it's roughly the same rate. It just happened to be more noticeable this time because he was far more precise with their locations: 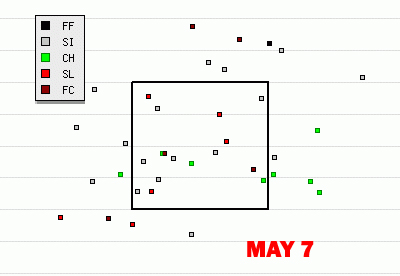 Only two are squarely in the strike zone. The half-green box to the left was one Duda rolled over to second, right after Santiago froze him with the one above (so he's not afraid to double them up). The one in the middle was not good, and it was sent into center by Ike Davis for a single on the first pitch. The others were much more beneficial for Santiago. Out of his eight changeups, one was a whiff, four were strikes not put in play, and two were taken for balls, which is a pretty good success rate for a pitch that is traditionally considered risky to throw.

That little guy that's just off the plate on the other side? That little guy was taken by Duda for strike three with the help of some nice receiving by Tyler Flowers:

Santiago is embracing changes in more ways than one this season. You may remember that Santiago altered his pants/socks between innings against the Rays. Now he's sticking with the long pants, but can't make up his mind when it comes to sleeves: 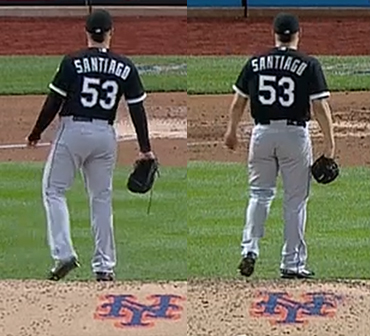