You could call it a teachable moment, but that would require a pupil who is willing to learn

Share All sharing options for: Jose Bautista demonstrates a lesson in lineup construction for Hawk Harrelson

Over the years, I've learned to live with Hawk Harrelson by savoring the moments nobody else could duplicate -- think "REDDICKDUDNMOOOOOOOOOO" or "DON'T FALL DOWN TYLER!" -- and overlooking the dubious truisms he lays down on a nightly basis.

And I guess my experience practicing the latter made it much easier to swallow Tuesday's ugly loss.

As Jose Bautista came to the plate as the second hitter of the game, Steve Stone noted that Bautista was the rare slugger in the No. 2 hole. He couldn't really explain it, but that didn't stop him and Hawk Harrelson from attempting to discredit it.

Stone: One of the reasons why Bautista's hitting second -- and we wondered about that -- was that Alex Anthopoulos, their general manager, feels that the best hitter in your lineup should hit second. And this is a guy that will make this offense go if he gets hot. We didn't see him in that first series in Toronto. He's back, and making a difference.

Hawk: I like Alex ... but I'd like for him to give me a definitive reason on why he thinks the best hitter in his lineup should hit second.

Stone: A great advocate of sabermetrics.

Hawk: Getting ready to say, numbers come in there someplace.

Stone: Yeah, they do.

Stone: And so they put him in the two-spot. And there he is.

Hawk: Well, he did good last night. [Bautista swings and misses for a 3-2 count] Well, I like Alex. He's done a good job, there's no question. He can't be charged with all these injuries that they've had. But I totally disagree with your best hitter hitting second, and I guess -- [Bautista takes a curve for strike three] -- there, he gone! Two down! -- and I guess for 130something years, other people have disagreed with him as well.

Stone: The best hitter is usually your third hitter.

A few things to note.

No. 1: He doesn't wait for an explanation before he totally disagrees with it, which is Hawk in a sentence.

No. 2: I believed it when he said "I like Alex" the first time. The second time is the ol' doth protesting too much.

No. 3: It's a good thing other professions aren't such sticklers to ideas from 130 years ago. Like, say, medicine.

Anyway, Stone went on to say that the Blue Jays' lineup is somewhat compromised by the lack of Jose Reyes, and that when he returns, it'll restore the original plans Anthopoulos had in mind.

Hawk: Well there you go again -- you take away from your second place hitter when you have a guy like Reyes leading off. Because there are more responsibilities in the two-hole than any other post in that lineup. You have to be willing to take a strike, sometimes two. Not be afraid to hit with two strikes on you.

Stone: No, hitting down in the count with a basestealer is a prerequisite for the two-hitter. Also, it's hitting behind the runner.

Stone: But you don't want Bautista to do that. He's too powerful.

Hawk: And also, besides that -- usually the manager makes out the lineup.

In the game recap, I already went over the reason why sabermetricians think the best hitter should hit second, so I won't C&P it here. But basically, Harrelson and Stone are only accounting for the 30 percent of the time the leadoff hitter reaches in a running situation, and not the large majority of the time the No. 2 hitter is left to create something on his own.

I respect their perspective, because it's what a lot of what players and coaches envision for the No. 2 hitter. And that's the reason I don't spend a lot of time harping on batting orders, because the people in the ground have to buy into it and sell it, and maybe they're not comfortable enough in doing so. 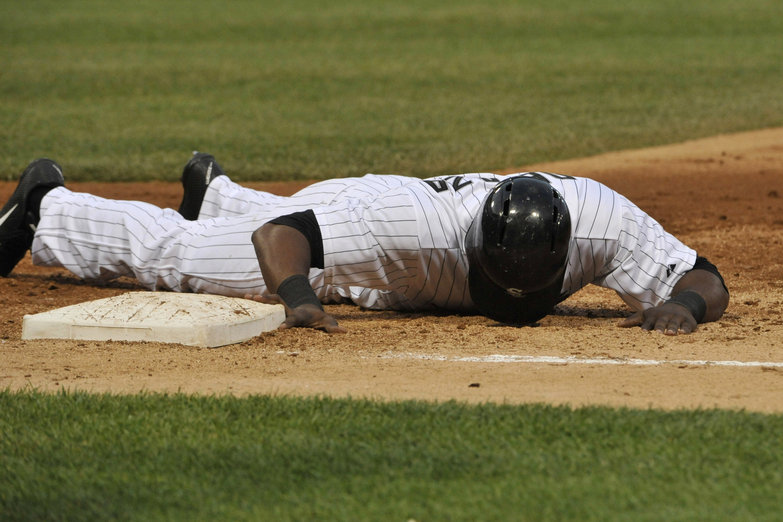 A sloppy total team effort gave Bautista a chance to tie it up, and so he did.

If the Blue Jays have reinvented the No. 2 hitter among their personnel, that's great. If a team hasn't embraced it top to bottom, no big deal. The difference between a "perfect" lineup and a respectable lineup is practically imperceptible anyway. Basically, I'd like to see some willingness to dabble in unconventional construction, but as long as there aren't any black holes in the first top five or six spots, I'm happy.

Still, Hawk's one-sided slagging brought out the militant sabermetrician in me in the ninth inning. Bautista came to the plate with two outs and nobody on and representing the tying run, and it was just too rich. Had Stone and Hawk written out the lineup card, Bautista would've only been on deck while a lesser hitter tried to keep the game alive for Toronto.

I couldn't help but fight smug with smug at the prospect (and then realization) of Bautista illustrating the sabermetric rationale. I enjoyed it more than I should, considering the outcome -- a game-tying homer, leading to a Toronto 10-inning victory.

Boy, the Blue Jays sure are stupid for batting their best hitter second.

I'd like to say Bautista taught them a lesson, but that would require the message to be received. If it got to the broadcast booth, they wouldn't admit it. They made no reference to Bautista hitting second afterward over the rest of the game, and it would be out of character for them to suggest they could possibly be mistaken.

But I'll make an effort to highlight the message, because it's rarely this tidy and self-contained -- the idea they mocked in the beginning of the game ruined the Sox's chance to win at the end of it! Also, I'm expounding on this because I don't think it's normal or healthy to delight in events turning against the White Sox because I had to endure either proud ignorance or intellectual dishonesty from the broadcast booth.

They don't need to understand sabermetric tenets to do their jobs, and most booths can pull off entertaining/ informative broadcasts without ever mentioning anything resembling advanced stats. But theoretically, Harrelson and Stone are paid to know what they're talking about. For all the decades they've spent around the game, you'd think they'd know so much that they wouldn't have to resort to forging into territory they refuse to learn.