Looking back at an old piece of cardboard leads to the question: What did you get out of your baseball cards?

Share All sharing options for: Lessons in greatness from Tom Seaver's small-text assault

Back when I was a kid, my understand of baseball card value was back asswards. Rookie cards did nothing for me, but I loved getting end-of-the-line veterans, because they provided way better reading material.

I bought a lot of packs for a quarter, but sometimes my grandma would come back from garage sales with a big box of randoms to sift through. I'd first sweep for stars and White Sox and A's, but I spent the most time examining the careers of the oldest players.

A card like a 1982 Cal Ripken Jr. might have one line of stats on the back. Or it might fill it out with random numbers from leagues I didn't know. Or it might include random trivia, like, "DID YOU KNOW: Cal has a sweet tooth!"

On the other hand, the back of a Bob Boone card was a good way to spend five minutes. He gave you 15 or so lines of numbers to process. They weren't great numbers, but you could look for round numbers and patterns, and try to fill in the gaps -- why was that year worse than the others? Why did he only play 76 games in 1981? (Hey, as a 6-year-old, most of my life was a labor stoppage.)

That's why I was always drawn to this Tom Seaver card. 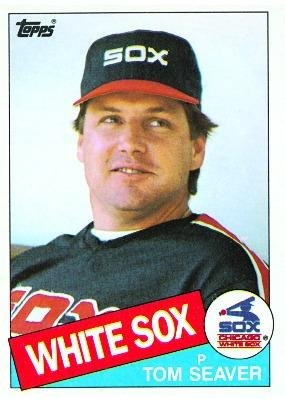 I don't think I knew who Seaver was before the card, or maybe I just knew only the name. But he had "WHITE SOX" across the bottom, so he went into a separate pile for closer inspection. And when you turned over the card, there were more than numbers.

There was black ink.

I can't find a scan of the back, but it looked something like this:

If you have a rudimentary understanding of what's impressive, but not much in the way of context, the back of this card could blow your mind. Most cards had lines with missing digits, gaps of white (or red, or brown) space that said, "Sometimes he was bad." The back of Seaver's card was a wall, and made it challenging to comprehend, even superficially.

After wins, I scanned the ERA column, and seeing three bold numbers in four years told me he was one of the best. One of them started with a "1." Insanity!

Strikeouts were bold. Innings were not, but there were always a couple hundred of them -- just like there were two digits in the complete-game column.

I'd never seen machine-like excellence like that before, so I rifled through cards to find another long-career veteran to get some idea. I'd find a mid-80s Jerry Reuss card to flip over and compare to Seaver's. I'd see that Reuss occasionally lost more than he won (7-14?), and he only pitched 82 innings one year, and there were only a couple instance of bold type, and for boring categories.

I learned about Seaver's greatness by stacking pieces of cardboard. And once I knew he was great, I wondered why he was only ordinary in 1974, compared to the 20-win seasons before and after. And why he went to the Reds. And how he got to the White Sox, and why he started winning games again. How many hours did I spend doing that as a kid? How many hours do I spend doing that on B-Ref now? What is time, anyway? Why is time? Big questions all.

Topps Archives Baseball is a celebration of the 70s, 80s and 90s, what many consider to be the glory years of card collecting. If you collected Topps Baseball Cards during these years then you will love Topps Archives Baseball. Look for autographs and memorabilia cards from today’s stars and your favorite retired players on classic Topps card designs.