An unintentionally errant Chris Sale fastball warrants a response, but nobody gets hurt

Share All sharing options for: White Sox vs. Tigers: The sensible beef

We're all familiar with the way Chris Sale transforms into Pissed Sale when he gives up a painful home run. Pissed Sale takes over, at the expense of his mechanics. Snarling and snorting, Sale's pace quickens, his velocity goes up, his body flies open, and the fastball doesn't go where it's supposed to.

The Detroit Tigers had seen this guy before, even before Thursday afternoon. You may cringe remembering that Sunday night game at Comerica Park last September, when Delmon Young took a Sale slurve off his shoetops for a three-run homer.

Pleasantries aside, after spending the whole evening around 91-92 per Brooks, Sale ratcheted it up to 95-96 against the first post-Young batter, Jhonny Peralta. He couldn't find the mitt on his first two fastballs, but Peralta swung through a typical hot-Sale arm-side miss:

Oh, but he can miss more. A couple examples from this year:

June 19: Disgusted with himself after allowing a two-run homer to Brian Dozier in a poor start against Minnesota, his first-pitch fastball to Joe Mauer missed by more than a plate:

Prince Fielder was the latest to receive this unintentional close encounter as the first batter up after Miguel Cabrera's opposite-field solo shot in the fifth inning on Thursday. Sale rocked, fired, and:

Sale said after the game that it wasn't intentional:

"Just trying to rear back and throw it as hard as I can. I've said it before: There's a time and place for that, and that wasn't the time or the place. I'm not even trying to send a message. I wasn't even trying to back him off the plate, honestly.

"I've got a lot of respect for Prince, the Detroit Tigers and the game of baseball. Going out there and doing something childish like that, that's not who I am. That's not what I do. It's just one of those -- it kind of got away and unfortunately turned into something.''

And when asked if frustration played any part in the missed location:

"Yeah, like I said -- he called fastball away. I'm just trying to get right back on track and sling one in there, and just opened up my front side and flailed off. Like I said -- I promise everything I love I wasn't trying to send a message, throw at him, nothing. Not even close."

Given how well we know him, we can take his word for it. These pitches are byproducts of his competitive juices, and it's probably something he should learn to harness. Maybe the catcher can help him out by calling a couple breaking balls (he threw a couple good ones to Nate Freiman after Josh Donaldson's game-altering slam on June 7). Or maybe he could even visit the mound. He might not like what he encounters when he gets there, but he is wearing protective gear.

For right now, it's normal for Sale to miss this badly under these circumstances, but that doesn't mean it's free from unintended consequences. In this case, it inspired the Tigers to fight fire with fire, resulting in a perfectly reasonable baseball ruckus.

While the Tigers had seen Pissed Sale before, Thursday was a little different. When one of your stars can smell the stitches of a mid-90s fastball the first pitch after a homer, it's easy to think Sale had something in mind.

So the Tigers decided to tell the White Sox they were paying attention. Two batters after Josh Phegley hit a grand slam -- with two outs and nobody on -- Luke Putkonen threw a fastball at Alexei Ramirez's hip.

Putkonen picked the safest place to throw at Ramirez because Ramirez has an 18-inch waist. Trying to drill him there is like trying to shoot The Mask. Sure enough, Ramirez dodged the shot, and then took umbrage as somebody might when the intent is that clear.

Now, after the game, his reaction seemed a tad hyperbolic.

If Putkonen went for Ramirez's head, sure. The hip doesn't seem like clan-feud material. But then you remember that with Ramirez, every wayward fastball is potential death. The guy lacks padding, and when hard stuff finds him, you never know what will happen:

So yeah, he could take these more personally than most.

It's possible some Sox hadn't noticed how Sale's pitch to Fielder could've been interpreted, and Ramirez wasn't involved either way, so his immediate displeasure and confrontation of Putkonen develops as expected. Detroit catcher Brayan Pena does a good job of intercepting Ramirez without grappling or wrestling him, but with two players physically engaged, the benches and bullpens were required to amble out onto the field on medium alert.

Everything to this point -- the accidental pitch, the purpose pitch, the reactions to both -- all check out as messages sent and received without actual damage. Then Chad Fairchild interfered with this nature documentary by ejecting Putkonen without prior warning, and then ejecting an irate Jim Leyland.

A warning would've been a good way to wrap it up. An ejection seemed too steep, and had the teams been flipped, we might've witnessed another "WHAT ARE YOU DOING WEGNER?"-grade explosion from Hawk Harrelson. Instead, we had to settle for mere lamenting over the overinvolvement of umpires. Oh well.

It ought to be interesting to see where the season series goes from here, because the first three games offered a refreshing dynamic. 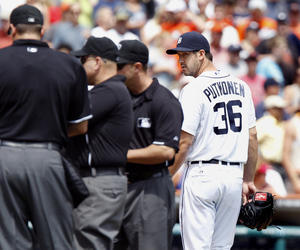 The White Sox played like a team unburdened. Even during Wednesday's loss, runs allowed didn't seem like the worst thing that could possibly happen. Perhaps it's only fun to play in Detroit when there's nothing to lose. Perhaps everybody has accepted their fate. Perhaps young, what-the-hell confidence is starting to seep into the proceedings. Or perhaps the Tigers really do need relievers.

However it happened, the Sox got to Detroit, first by blowing up their bullpen, and then by benefiting from a discretionary call after a natural confrontation. After three solid months of greased-tee performances up and down the lineup, it was refreshing to the Sox unnerve somebody else. If they can carry the devil-may-care attitude into the second half -- at least against the Tigers -- it will give us something to watch on average of every four days.

And should it escalate ...