There's a line from one of my all-time favorite books, Dave Barry Slept Here: A Sort of History of the United States, that often came to mind when watching Matt Thornton at his peak:

The Second Amendment states that, since a well-regulated militia is necessary to the security of a free state, you can buy high-powered guns via mail order and go out into the woods with your friends and absolutely vaporize some deer.

Often times, Thornton's night of work began with a left-handed hitter who had trouble hanging in against merely decent southpaws. Deploying a guy like Thornton, who could dot both sides of the plate with 98, might not have been illegal, but it felt kinda unethical. At the very least, it was just plain unfair.

Fun fact: Thornton struck out 262 left-handed batters over the course of his White Sox career. He struck out 63 of them on three pitches and another 17 on 0-2 counts. Considering he never had a breaking ball, it's amazing that so many hitters just never stood a chance regardless.

My favorite example of Easy Heat dominance took place on Opening Day back in 2010. Thornton toed the rubber in the ninth to face three quality Cleveland lefties he faced so often: Grady Sizemore, Shin-Soo Choo and Travis Hafner.

Hafner fouled back Thornton's first pitch, the first contact of the inning. He swung through strike two. That put Thornton on the cusp of the first immaculate inning for a White Sox pitcher since Sloppy Thurston struck out the side on nine pitches on Aug. 23, 1922.

Thornton went for it by going up the ladder ... and Hafner's tomahawk swing got a piece of it, fouling it back. Dammit.

One pitch later, Hafner was retired on a diving catch by Alex Rios to end the game. Thornton retired three tough lefties with 10 fastballs, and here's where he put them: 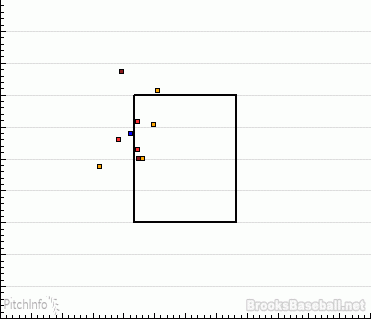 That was Thornton at his machine-like best -- minimal muss, minimal guile, minimal compassion, maximum posture. When he fired strike three, he simply turned his momentum toward third base to wait out the throw around the horn, his body language saying with no trace of humanity, "Next."

Thornton's best lasted a surprisingly long time considering his state upon arrival: a hard-throwing left-hander with no real mechanical clue. He was a first-round pick of the Seattle Mariners in 1998, but Tommy John surgery in 2003 interrupted his development, and by the time he was healthy, the Mariners ran out of time and patience getting him back on track.

When he became available in the spring of 2006, Kenny Williams jumped at the chance. He knew that Don Cooper wanted to work with Thornton. From a Chicago Tribune story on March 21, 2006:

"Don Cooper and I have had this conversation about Matt Thornton for a couple of years," Williams said. "And when the pitching coach tells you 'I want this guy,' and don't worry about his ability to throw strikes, and my scouts want the guy as well, I'm going to do everything I can to go get him."

In this case, "everything" Williams could do wasn't much at all. He sent Joe Borchard for Seattle in a bust-for-bust trade, but Cooper came through on his word, thanks to a solution we'd hear again and again for his reclamation projects: Use your height. As Thornton described it in a Tribune story from July 21 of that year:

"I'm riding to the plate more," Thornton said of his adjustment in which he tries to release the ball as late as possible. "I'm 6- foot-6, 235 pounds, and I was throwing as if I was 6-foot, 200. I'm using my entire body, and that's why my velocity is consistently higher."

The solution was literally that simple. In one year, Thornton improved everything:

It was the start of a beautiful relationship. For the first five years of his 7½-year career on the South Side, Thornton was a dominating presence against lefties who could also overpower righties. He turned the trade into one of Williams' best, and he turned the three-year, $3.25 million extension with two club options into one of Williams' best. Each option year was a no-brainer.

Thornton was such a revelation, and his heat was oh-so-easy, that it was easy to forget his age. He was 29 in his first full season in Chicago, and when it came time to pay him what he had truly earned, he was 35.

The second contract -- two years, $12 million -- didn't quite reward the Sox so handsomely. He had lost a little off his fastball, and his slider never quite turned into a reliable second pitch, and so he became more hittable. His teammates must have grown too comfortable with the lack of contact over the years, as Thornton had a knack for getting undermined by terrible defense in the second half of his Sox career.

"Thornton Luck," as it came to be known, emerged during his ill-fated time in the closer role in 2011. To jog your memory, here's Thornton Luck from April 8:

And some more three days later:

After years of blowing away opponents without mercy, the game turned its cruelty on him. Yet to his immense credit, he never called out teammates for letting him down. The consummate professional was especially supportive of Juan Pierre, whose handiwork is in both of the GIFs above:

"Juan Pierre is a great player; he's made two mistakes behind me," Thornton said. "I'll never say anything about that guy. I want every fly ball I get to go to him. He's dedicated to this game more than anyone in all of baseball. So I'll never say anything bad about anything going on behind me, anyone on my defense. They're great players. I've got Gold Glove winners, All-Stars. Everybody's trying to win the game. We have one common goal, to win."

Sometimes Thornton Luck didn't involve his teammates -- even broken bats didn't reward him, as two bad-BABIP years in 2011 and 2012 reflected. Combine the penchant for strange occurrences with diminished effectiveness that cut down his margin for error, and many rough endings unfolded with Thornton on the mound. From 2011 to 2013, his record was 6-18, and here and elsewhere, many fans feared the worst when he took the mound in a high-leverage situation.

Still, it's amazing that Thornton aged as well as he did, given that never developed a go-to secondary offering. He lasted long enough to own the White Sox franchise record for relief appearances (512), and by a comfortable margin (Bobby Thigpen is second with 424). Over the years, he evolved from Robocop-grade badass to elder statesman gracefully, and sometimes whimsically:

Fittingly, he leaves the White Sox organization in palindromic fashion -- he came to Chicago in a transaction involving a change-of-scenery outfielder and threw a scoreless outing in his debut, and he tossed a 1-2-3 inning on Thursday (striking out final batter Jhonny Peralta) before getting shipped up to Boston for another toolsy project.

In commenting on the trade, Rick Hahn succinctly summed up Thornton's impact:

"His level of consistency and excellence over an extended period of time is difficult to achieve not only in the American League but in our ballpark," Hahn said. "There was a time where he was probably the most valuable guy in our bullpen. He didn’t rack up the gaudy save numbers. But he was an important part to many successful White Sox clubs."

Thornton wasn't as forthcoming in wrapping up his White Sox career:

"I'm terrible at that kind of stuff," Thornton said. "I tried to be consistent and be there every time the team needed me. I blew my fair share of games, and I did a good job my fair share of times. I took care of myself and gave 100 percent. Every time out, I gave all I had."

"Easy" was in his nickname around here, but his success wasn't as simple as he made it seem, and that might have set him up for an unusually harsh evaluation in his later years. With Donnie Veal, David Purcey, Santos Rodriguez and other fringe talents auditioning to fill the role Thornton occupied since 2006, I'm guessing it won't take long for fans to realize that he brought much more to the White Sox than heat.