Terrerobytes: Chris Sale tries to tone it down

Plus: The second half rotation, Paul Konerko's rehab assignment, and some excellent yarns

Share All sharing options for: Terrerobytes: Chris Sale tries to tone it down

The first day of All-Star festivities offered plenty of exhibition action to soak in, including:

The Celebrity Softball Game: Frank Thomas is relegated to pitching these days, but he can still swing a bat: 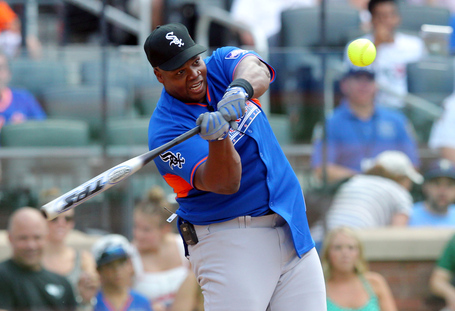 The Home Run Derby: I tune in and out -- too many Chris Berman "backs" to sit through -- but the Yoenis Cespedes-Bryce Harper final was worth watching. Here's Cespedes' 32 homers, the last of which he capped with a magnificent bat flip:

The Chris Sale apology tour: OK, it's not really a tour, but it is the second time he's had to explain that a suspiciously timed plunking wasn't intentional.

Sale spent a chunk of his All-Star media availability talking about the consequences of Pissed Sale's pitch to Prince Fielder. Dan Hayes relays quotes from Sale and teammates, all of whom talk about the need to balance intensity with propriety :

"That’s a little bit of anger, adrenaline, mixed with just kind of being an idiot, too," Sale said. "That’s just bad baseball pitching out of anger and frustration. Gameplan just goes out the window sometimes and you’re just like ‘Here it comes and it’s coming in hard.’ Sometimes you act foolish and foolish things happen. I’ve been burned twice by it."

Speaking of Cespedes, this story of his family's journey to the United States is incredible. A sample paragraph:

That day, Ivan Ortiz, 37, another cousin, caught an iguana, skinned it and grilled it. But it was raw and tough, and no one could stomach it. Ortiz also brought down a seagull with a rock and cooked it, with similar results. The group caught two crabs, with two women digging out a bit of meat for sustenance.

The new rotation is starting to come together, as Mark Gonzales reports that John Danks will pitch on Friday againt Atlanta, followed by Jake Peavy on Saturday. Simon Castro was demoted to Charlotte, so a Peavy recall would appear to be the corresponding move.

Jose Quintana is scheduled for Sunday, which sets up a Sale-Max Scherzer matchup on Monday.

Peavy's rehab stint might be over, but the Barons will still have a superior postgame spread to look forward to later this week when Paul Konerko comes to town. The initial rehab assignment has him playing there Thursday through Sunday.

James takes a step back to survey the wreckage:

That said, some White Sox fan committed an act of sacrilege unknowably profound in a past life–like, covering some holy alter in pizza puke and then just leaving–and now we have been made to suffer. That is the cause of the 2013 White Sox offense, and there is no room for debate on this matter.

As part of a project determining the best deadline trades for all 30 MLB teams, David Schoenfeld arrives at the Matt Karchner-Jon Garland swap in 1998 for the White Sox. It's hard to argue, and even harder to fathom looking back.

(hat tip to jorgefabregas, whose acqusition took place in May, and therefore doesn't count.)

If you didn't see AJP13237's FanPost on the right rail asking how you ended up finding/sticking at this site, then check it out. The stories are interesting, and I'd like to hear 'em all.