One day, Chris Sale will get to enjoy an All-Star Game without a retiring legend being accommodated at his expense.

Last year, Sale had to pitch around Ian Kinsler's parting gift to Chipper Jones -- a sketchy read that turned a routine grounder into a pinch-hit "single" in Jones' last All-Star at-bat.

In this year's All-Star Game, Sale put together an MVP-level performance by throwing two perfect innings against the National League's starters. He picked up the win, which requires timing as much as talent in exhibitions, of course. But he also finished the game with the highest WPA, which means he did more than anybody to push his team toward victory.

But as long as Mariano Rivera pitched scoreless baseball in an American League victory, there was no way Bud Selig could pass up an opportunity to honor baseball's all-time save leader one more time.

Not that Sale seemed to mind. Ever the professional, Sale was effusive in his praise of Rivera after the game:

"There's no other MVP in this clubhouse, in this stadium than him,'' Sale said. "I really think that's enough said. He stole the show. Watching him was probably the coolest sports experience I've ever had. It was awesome. I'm somewhat speechless.'' [...]

"I didn't skip a beat,'' he said. "I stayed out there in my full uni. The one thing I was anticipating was watching him pitch. What a moment.''

At least Sale came away from the Midsummer Classic with a win to show for his effort. That's no small feat for a pitcher, although the White Sox seem to happen upon them more than other teams. His All-Star Game victory is the third by a Sox since 2000 (James Baldwin, plus Mark Buehrle in 2005).

Still, it feels as if Sale was shortchanged, if only because his sliders to Carlos Gonzalez deserved greater acclaim. The Colorado Rockies outfielder, who is also the the National League leader in OPS, simply had no chance against either of the sliders he saw during a four-pitch strikeout in the second inning.

Freeze (the bat and ball blend into their background, so I've highlighted both): 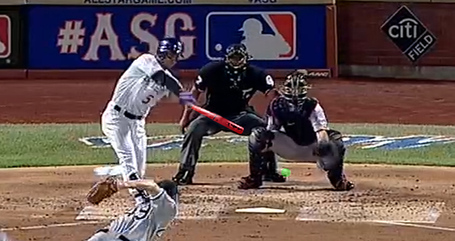 And here's the second for the strikeout: 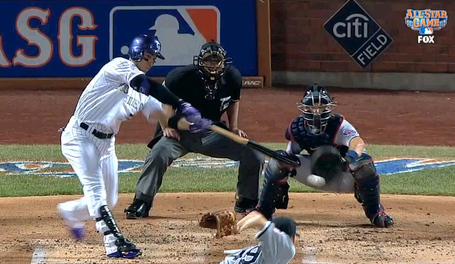 And if you want to see what that looks like on Brooks: 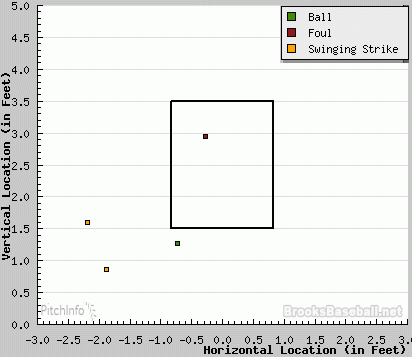 Sale probably wasn't a popular figure in Denver, as he also struck out Troy Tulowitzki with a beautiful backfoot slider in the third inning:

Sale's night ended with Bryce Harper blistering a liner right to Miguel Cabrera, so he benefited from a little bit of luck as he followed up Max Scherzer's perfect inning with two of his own. All in all, it was a fine night's work for the Sox's lone active representative, and even more padding for his resume. In his two years as a starter, he's got two All-Star appearances and three scoreless All-Star innings to his name. If he keeps this up, there aren't going to be many more players to whom he can serve as an accessory.