Plus: Jeff Keppinger says (a) little, the White Sox have one top(ish) prospect, and Twitter scams suck

Share All sharing options for: Terrerobytes: Highlights from the Hawk Harrelson documentary

If you didn't watch "Hawk: The Colorful Life of Ken Harrelson" yet, there are going to be some spoilers, so scroll down until the Terrerobytes begin if you want to preserve the viewing experience.

That made the whole thing kind of thin. Harrelson's worth a documentary, and the way he describes "Hawk" as a persona that covers for a supposedly introverted "Ken" is something I'd like to hear described from somebody who knows both well. And that's not even getting into what eyewitness accounts of Hawk's wildest moments would have provided.

But as Carlos Maybe said after the airing last night, it's good for what it was -- a vehicle to let Harrelson spin some yarns. It's just a stretch to call the MLB Network production a documentary, because it wasn't grounded in or against anything or anybody. You have to take Harrelson's word for everything, which is dangerous territory if you're relying on it for facts and specifics.

If you were just looking for White Sox-related entertainment during the interminable All-Star break? I think it did it's job there.

Noteworthy images: I'd seen the pictures of Harrelson riding Charlie Finley's mule, dressing as the Hamburglar, and of course the Nehru jacket, but this getup and haircut from his Cleveland press conference was new to me: 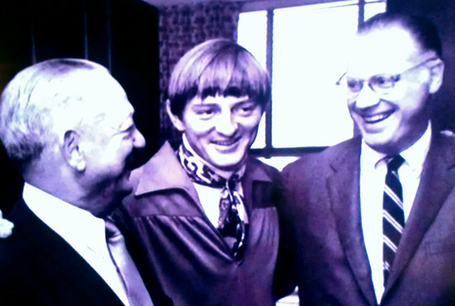 Noteworthy video: Besides his recent umpire-related explosions, we were also treated to this one I'd linked to before from 1991. We've heard worse rants, but the real highlight is Harrelson wrestling with his body language while Tom Paciorek sets the scene for the road ahead.

But I hadn't seen Harrelson and Sudden Sam McDowell reenact "Who's on First?"

Favorite quote: This is funny without context. It's even funnier with a little context -- he's responding to Vince Lombardi wanting to talk to him:

"So now I open the freezer, take out a popsicle, take off the top very defiantly, y'know, like a ... butthole."

So yeah, it was an hour well spent, even if it could be revisited in more depth.

Jon Heyman hears that the Pirates are in on the hunt for Alex Rios, but Alexei Ramirez could draw their interest, too. Both would be upgrades -- in terms of OPS, Pittsburgh has survived the league's worst production at both right field (.237/.298/.373) and shortstop (.224/.269/.297) so far.

Nick looks at Alex Rios' possible return by trying to assess the teams in need, and then stacking it up against the going rate for comparable veteran outfielders in previous markets.

John Sickels persevered through some unintentionally hilarious technical difficulties to post his updated Top 75 Prospects list. He threw White Sox fans a bone by expanding the list to 76 so he could include Erik Johnson.

Speaking of throwing bones, here's what broke his laptop:

something stupPhappened. /dog /spilled /yogurt /smoothie /all /over /computer. /unusable.

Maybe it's because he's quiet, or maybe it's because his ceiling was never that high, but we haven't heard much from Jeff Keppinger about his incredibly disappointing first half. Then again, he doesn't have much to say -- a bad approach compounded by bad luck.

The Kansas City Royals suffered a costly sweep at the hands of the Cleveland Indians for a break, leaving them eight games out of first and 6½ behind the second-place Tribe, too. Nevertheless, Dayton Moore maintains he's going to keep pushing for the postseason this year. Fans are particularly upset over this quote:

"When I came here (in 2006)," he said, "I told everybody this: ‘You ask anybody in baseball, whether (fans) want to believe it or not, unless we’re going to be a big-market club and go out and spend on multiple free agents a year, it’s an eight-to-10-year process to get this thing in a position where you’re competing to go to playoffs."

This story isn't too odd, sadly -- some person is telling every famous person he can find on Twitter that he has bone cancer, hoping the "story" will get spread widely enough for financial gain later. He was found out because he used the photo of an 8-year-old cancer patient in Australia, and neither the boy nor his family appreciated being exploited in a scam. This stuff happens. The reason I bring it up here:

The fake Matt has been using the Townsville boy's photograph to claim he is suffering from bone cancer, and asking everyone from US President Barack Obama through to Paris Hilton, to help share his story.

I'd seen the same account tweet Jake Peavy earlier in the day, and Peavy didn't respond. Now the account appears to be swapped with another name, with old tweets attempting to sell the scam. Setting the boring details aside, Santiago didn't lose anything by interacting -- as far as I could tell, it wasn't to the point of fundraising or anything -- but I just really hope that his super-friendly outreach efforts aren't used against him.

On the plus side, Australia considers Santiago a "sports star."