Lefty right to want to take on Miguel Cabrera, but emotions appeared to get the best of him afterward

Two things I like about Chris Sale, aside from the whole "enormous talent" thing:

That said, both parties may have learned a lesson during the fifth inning of the White Sox's 7-3 loss to the Detroit Tigers.

Miguel Cabrera came to the plate with a runner on third and two outs with the Sox trailing 1-0. Sale wanted to pitch to him. Robin Ventura wanted to go around him.

He obeyed the order, but he didn't like it. You could tell because, for starters, he walked Prince Fielder on four pitches (out of three walks, that was the only one that didn't involve pitching around Cabrera).

If that wasn't enough evidence, here's Sale venting under his glove to Don Cooper during the subsequent mound visit.

After which Sale thought he heard Don Cooper tell him, "If you don't like it, eat mitt."

(If you're ever playing Charades and you draw the card reading "GRUDGING ACCEPTANCE," there's one thing to try.)

Doug Padilla picked up on the discord and relayed pertinent quotes from it. Here's Sale:

"I don't like giving people stuff," Sale said. "I like people to earn getting on base. But at the end of the day that's his (Ventura's) call."

"He probably wants to pitch to (Cabrera) but that’s my decision," manager Robin Ventura said. "It’s one of those that with a lefty on deck, really any lefty -- I know Prince is a great hitter -- Chris against a lefty, you’re going to take that any time just to stay in the game."

Both have a point, but at the end of the day, I'm siding with Sale on the call itself. I'm generally against the intentional walk, not just because it raises run expectancy, but because I think it can take a pitcher out of his element. I understand Cabrera is the game's best hitter, but Fielder isn't a guy you'd want to see with runners on the corners and two outs regardless of what came before him. There wasn't enough of a disparity between hitters to make the pitching situation especially advantageous, and given Sale's immense talent, I'd give him the benefit of the doubt.

That said, the manager's orders shouldn't take Sale out of his element this much. It's the second Pissed Sale encounter this month (both involving Cabrera and Fielder, oddly enough), and there was less reason for a visceral reaction this time around.

I mean, he wasn't even close on the walk: 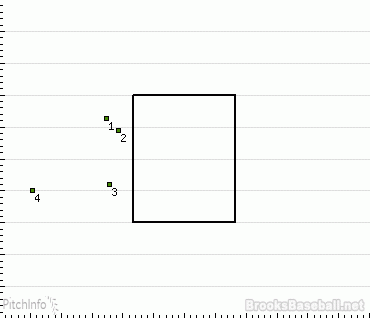 It's kinda funny that Pissed Sale stayed that far away from Fielder, which makes me wonder if it's overcompensating for what happened the last time he got mad. However, it's possible the pitch calls might've factored into the missed location. Sale threw two changeups to Fielder, and he'd only thrown one changeup to a lefty over his last three starts total.

But it's still more reasonable to pin the outcome on emotions, because the next time Fielder came to the plate, Sale absolutely worked him over (see it in chart form):

Now perhaps Fielder would've swung at that first-pitch slider in an RBI situation. But Sale nailed his location on the three other pitches, resulting in an easy strikeout, and chances are if he executed that well against Fielder after the Cabrera walk, he would've kept the score at 1-0.

There'll be teachable moments abound the rest of the way, and both pitcher and manager can take something away from this one. Given the relatively low stakes of every game, I would like to see Sale given a chance to go balls-out in these challenge situations, because there's more to gain than there is to lose. That said, we know Sale has to gear down on his emotions in heated situations, and if he doesn't like a plan, he can't let it get to him.

In his story, Padilla used Adam Dunn as an objective party in the debate, and he comes to a similar conclusion -- Sale needs to respect the chain of command ...

"Yeah, I love Chris to death but that’s not really his call (to make)."

... but the confidence is ultimately an asset:

"I love it, how do you not? With that stuff I’d think I could get everybody out too."