Josh Phegley's debut under the microscope

Catcher didn't have a whole lot to work with Friday night, but let's poke and prod at his game regardless

Share All sharing options for: Josh Phegley's debut under the microscope

While four White Sox made debuts of varying significance on Friday night, I was at my local ballpark watching the No. 1 overall pick from this year's draft, Mark Appel, make his first professional start.

On his very first pitch, Appel allowed a triple to center. On his second pitch, a grounder drove in the run. Two pitches was all it took for the Lowell Spinners to take some of the shine off him. He allowed a second run to score in the first, and although he threw a scoreless second, he emerged from his inauguration with a 9.00 ERA.

(The game itself ended in the 10th inning on a walk-off dropped third strike, which I don't believe I've ever seen before. But it seems like something the Sox can do if they don't put their minds to it.)

Anyway, I came home after the fireworks and watched the Sox-Rays game with a similar level of detachment. Now that individual wins and losses lack meaningful implications, I'm free to invest myself in parts of the game, rather than the whole, when the need arises.

Josh Phegley was the subject of that fascination tonight. He's a wild card for reasons I detailed in Friday morning's post, and so it's going to be fun to make judgments and see whether they hold up.

Phegley's defense has been a bigger question than his offense, and like Appel, he proved fallible on the second pitch:

Another pitch popped out of his mitt one batter later, so early on, it appeared that his receiving might be even worse than advertised. But those were the only two catchable pitches that escaped him, and he went on to have a pretty good game behind the plate for his first one.

There were some marks against him in the box score. Desmond Jennings stole a pair of bases, more because of the jump on the pitcher, but Phegley had trouble making the exchange regardless. He couldn't get rid of the ball the first time, and while he did execute a throw on the second one, it sailed and tailed well wide of the bag. But perfect throws probably wouldn't have nailed Jennings anyway, so Phegley hasn't caused harm yet there.

Take the wheels off a freight train car and put it behind the plate for Purcey, and it only blocks one of those.

But the second one reminds me -- it's funny watching Phegley maneuver behind the plate after months of watching a catcher who is seven inches taller. You can see why Flowers has established himself as a good high-strike caller and catcher because he doesn't have to reach up the way Phegley does. Naturally, Phegley seemed to get his knees and/or butt down more frequently on pitches in the dirt.

I do wonder if Phegley's butt was too active on a couple of pitches. During the second inning, Jose Molina took Dylan Axelrod deep on a non-awful pitch. In fact, the Brooks chart says it was off the plate a little inside, and yet Molina was able to turn on it.

Two batters later, Jennings nearly decapitated Axelrod. This time, it was just a bad pitch. But in both cases, Phegley set up inside, and rather vigorously. Watch the video of Molina's homer, and then this GIF of Jennings' single:

Can a hitter hear, feel, or see in his peripheral vision a catcher bouncing close to him like that? I honestly don't know the answer. Maybe it doesn't matter. Axelrod's stuff was very flat on Friday night, even when his location wasn't awful, and perhaps an invisible catcher with pillows for feet wouldn't have made a difference. It is a departure from what we've seen behind the plate, and something I plan on watching as one game turns into a more significant sample.

With the bat, Phegley's tendencies seemed easier to ascertain. He looks like he's geared up for low pitches, and Jeremy Hellickson figured that out pretty quickly. Six of his 10 pitches to Phegley were changeups, including four in a row -- the last two of the first at-bat, and the first two of the second. Here's what his second three-pitch strikeout looked like: 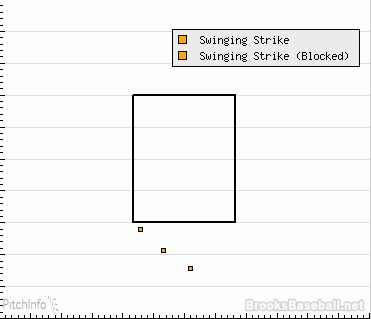 Those were a couple of welcome-to-the-big-league moments, because he probably didn't see many right-handed changeups at Triple-A, and not many like Hellickson's from either side. He was doubled up for his first strikeout, and doubled up two more times after that.

When he did get a fastball he expected, he put a couple good swings on them. The first resulted in his first hit and RBI, and the second ended in a well-struck sac fly.

It's possible these first impressions could be misleading, and we'll get a chance to find out, because Robin Ventura says Phegley is on the club to share time with Flowers, not back him up. But if you're looking for reasons to watch, first-guessing on players and seeing how well it holds up is a way to make your own fun.

Right now, the biggest question I don't have any answer for is: What's up with his hair?