There isn't a picture that better sums up the flimsiness of rumor season than the screen cap of Lone Star Ball after the news of the Alex Rios trade broke (via SSE): 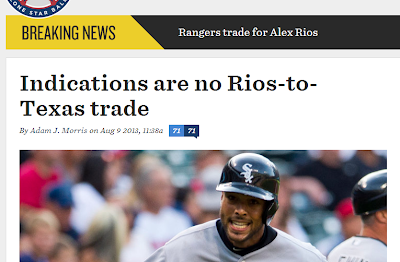 That's not an indictment of Adam in any way -- he merely relayed updates from two separate supposedly connected people (Jim Bowden and MLB.com's T.R. Sullivan) who heard the deal was highly unlikely.

Bowden's tweets alone tell the story of getting the story wrong:

Lesson learned: If you're looking for MLB scuttlebutt, you won't find it from a Crate & Barrel employee. (In earlier news, Adam Dunn cleared waivers "easier than a fondue set.")

Now that an actual trade with actual players has taken actual place, let's look at some actual reactions:

Rick Hahn spent about a half hour talking to 670 The Score's Dan Bernstein about the Rios trade, and what the White Sox might be able to do with their sudden financial flexibility. It's a great interview on both sides. 2HA took notes while it was happening and put it in a FanPost; below that is the audio link, as well as the column that Hahn and Bernstein discussed.

And also some reaction from Rios, who left this tweet on the way out the door:

So thankful 4 the time i spent in Chicago. Thank u guys so much. This was a gr8 run for my fam and I. U will be missed dearly. #WhiteSox

Jon Heyman's response to the trade is pretty much representative of the consensus third-party opinion -- the Rangers got the OK outfielder they needed in Rios, and the White Sox didn't have any pressing reason to hang onto him, aside from the potential of a better market in the winter. I'm singling out Heyman's, though, because this paragraph sums up what we'd figured about those leaks that had the Sox supposedly asking for everybody:

There were reports of the Sox asking for Profar or a package with Martin Perez, but word is those reports may have been somewhat "exaggerated'' (that's the word of one person involved in the dealings). In any case, there's little doubt Chicago tried for more at first. That's the way trades work. That doesn't mean anyone was willing to come anywhere near meeting their asking price, either before or after the deadline. And that comes under the heading: hey, it doesn't hurt to ask.

If I were to sum up the opinion of the reaction from the Rangers' side, it would seem to be, "That's fine." More interestingly, these two articles address what the Rangers might be able to do with Rios after the season. Morris anticipates that Rios is a mere contingency plan for 2014 and figures he'll be flipped if Texas can finally pester the Marlins enough to get Giancarlo Stanton, or an outfielder of similar stature.

On the other hand, Bryan Grosnick at BTBS says if Rios falls flat on his face like he did when the White Sox claimed him from Toronto, that could interfere with the Rangers acquiring somebody who would've really fit their needs in the offseason, like Shin-Soo Choo.

I'd be happy for Rios is he played well enough to get credit for playing a significant role in his first career playoff appearance, but that wouldn't be particularly useful to us.

Here's what I hope happens: The Rangers try trading Rios after he finishes the year riding this .700-OPS rail he can't quite break from (.672 since June 1, but better lately). That would put them in the same position as the Sox -- trying to trade a useful-but-retail-priced player who poses opportunity cost issues, and then it'd be easier to project what the Sox could've done.

In that hypothetical situation, Jon Daniels would have to do better than a Leury Garcia type and $4 million extra, since that's what the Sox saved by dealing him now instead of later. It's possible Hahn played it too safe and could've done better, and that would be a way to have some idea whether that'd be true.

If Rios crushes everything in sight during the stretch, then the Rangers would be dealing a different player than the Sox had. Sure, Rios could've had a dynamite last two months in Chicago, but he's had nice Septembers with the Sox and it hasn't helped his cause any. Doing it with Texas would give him that new-postseason smell and help him shed the not-gritty-enough label. That version of events would be great for Rios, but I'm rooting for science and learning just a little bit more.