The return of the Chris Sale Velocity Watch

Fastball dipped to 2012 levels during unimpressive start, but there are a number of variables to consider

Share All sharing options for: The return of the Chris Sale Velocity Watch

The Cleveland Indians might just have Chris Sale's number this season. Thursday afternoon's 6-1 loss to the Tribe was just the third time this season he's failed to finish six innings, and the Indians foiled him in two of them.

But Sale did look a little different during his five innings, if only because he didn't quite have the surprising heat he's been packing for most of the season. His average fastball on Brooks before revision was 92.17 mph, and while that number would've fit right in with his game logs last season, it's down two ticks from his average fastball from May through July.

Moreover, his velocity flagged as the game carried on, and that's uncharacteristic, too. 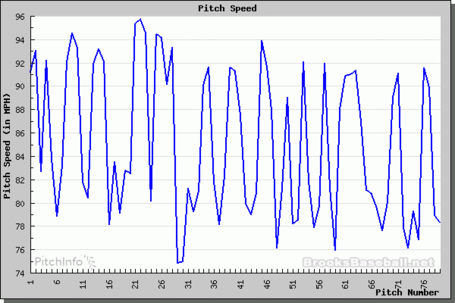 After eight starts with an average fastball above 95 (not counting the slow gun in Detroit that took 2-3 mph off everybody), Sale's lost a little velocity over his last two. That chart is what caught my eye a little more, because Sale's been great about maintaining his best fastball through his starts.

I don't know if there is any reason for concern, but there are four talking points I'm thinking about as Sale begins the last two months of an otherwise meaningless season.

No. 1: It might just be a blip, or normalization.

Sale said he didn't feel as sharp on Thursday, and that always happens. He also mixed in a lot of changeups and sliders, so maybe he wasn't thinking heat-first. Here's all Sale said about it after the game:

"I'm not going to sit here and make excuses. I got my [rear end] kicked," said Sale, who allowed three hits in the second, three hits in the third and four in the fifth. "I wouldn't say that was my best stuff I featured, but you've still got to go out there and find a way and unfortunately I couldn't."

It's also worth noting that this was the first time all season that Sale made consecutive starts on four days' rest. Perhaps this is what his velocity would've looked like if it weren't for the rainouts and wackadoo scheduling.

No. 2: The heavy heart might've weighed down his arm.

This was Sale's first start of the "Our Performance Cost Us Our Friends" season, and he was asked about it after the game:

"It’s tough losing teammates, losing your buddies, losing your brothers,’’ he said. "This is kind of like a family. We spend more time in here than we do with our families. These guys are like brothers to myself and everyone in here, and seeing some guys you’ve seen around here for a while and some leaders step out of here is tough, but I’m not here to make excuses.

"We still have to win games.’’

One of the departed, Jake Peavy, talked about Sale to the Providence Journal -- specifically, Sale's reaction to the controversial intentional walk to Miguel Cabrera last month.

He told a story from this month, when White Sox pitcher Chris Sale argued with pitching coach Don Cooper over pitching around Miguel Cabrera. At one point in his career, that would have been Peavy, too. Now?

"I had to grab him after it was over and say, ‘Chris, they want you to be that way; they want you to have that makeup. It’s part of what makes you good,’" Peavy recalled. "But you have to understand your body, you have to understand the professionalism in the game and what truly gives your team a chance to win, and that’s not all the time what you’re thinking when you’re that age."

I smirked when Peavy talked about understanding bodies, but Peavy was something of a cornerman to whoever wanted to listen, so perhaps there's some kind of hangover. Or it could be...

No. 3: The unbelievable lack of run support

... that's dragging him down. Once Sale gave up a wind-blown homer to Ryan Raburn, he'd already allowed more runs than his offense has been spotting him in an average game. Alejandro De Aza's solo shot provided the only run for Sale, which made his league-worst run support just a little bit worser.

Sale's trying to talk past it:

"It is what it is and you don’t put too much emphasis on it," Sale said. "You’ve still got to go out there and do your job. Just like there are days where you go out there and give up a bunch of runs, those guys are still fighting for their at-bats and their hits so I don’t think anybody is giving in. You’ve got to keep your head up and keep grinding it out."

But I do wonder if it's getting to him. I remember John Danks experiencing similar issues as he started the 2011 season 0-8 through the first two months. Hard luck seemed to weigh on him at the end of that stretch.

No. 4: Time to watch the workload.

Before he exited with a season-low 79 pitches on Thursday, Sale had thrown at least 110 pitches in six straight starts. The last White Sox pitcher to do that? Mark Buehrle in 2007. Beyond Buehrle, Esteban Loaiza is the only other pitcher to rip off a half-dozen 110-pitch starts in a row this millennium.

Moreover, Sale entered Thursday's outing having thrown 115 pitches in five straight starts. You have to go back to Wilson Alvarez in 1997 to find the last pitcher to match that -- and Sale has him beat by one pitch (599 to 598).

Now I'll admit those endpoints are somewhat arbitrary. If I knock it down to five consecutive starts with 114 pitches, Peavy did that just last year. Even then, Alvarez is still next in line after Peavy, and given the elevated level of concern over his health last season, it seems odd that he's being worked like a Bulldog just one year later.

He's on pace for 220 innings if he starts every five games the rest of the way, and that would be an incredible number if he were able to maintain a sub-3.00 ERA. But a number of those innings -- and dozens of those pitches -- were in the pursuit of wins that never materialized, and I'd hope the reins are pulled back a little bit in that respect. It's gotta suck to be 6-11 with a 2.92 ERA and a 5-to-1 strikeout-to-walk ratio, but nobody's blaming him.

It's too early to tell which one(s) of these weigh more than others, but we might be able to draw a firmer conclusion about the impact of extra rest over the next couple of weeks. If the schedule holds, Sale will make another start on four days' rest against the Yankees on Tuesday, and an off day on Thursday could be nullified by a scheduled doubleheader against Minnesota on Friday.

If the Sox don't use the 26th man on a taxi starter against the Twins, Sale could have three more starts on a regular rotation before the next uncompromised scheduled off day. That alone might be the cause of his descent into 92-93 mph range, and 150 innings into the season, that might be nature taking its course with no significant ill effects underneath it. Then again, if the Sox keep playing like they have been, we won't be able to filter out the effect of suffocating futility, either.