The 2007 White Sox rode a nice little hot streak in September to the 8th pick in the draft. If they had continued to crap the bed, they could have had Buster Posey. The worst Sox team since then seems to be pulling the same trick. Is that really such a bad thing?

The Sox are playing pretty decent baseball over the last 3 weeks or so, which of course leads me to worry about what happened in '07. After playing .422 baseball for the entire season--"good" for a 68 win pace--the Sox went on a run of pretty decent baseball at the worst possible time. Their 15-12 record in September got them to 72 wins and the eighth pick. The Giants finished with 71 and took Buster Posey with the fifth pick.

That's a fun alternate reality to think about, right? Of course it raises its own kettle of fish: how would Posey have faired if he'd been put through the ringer with our instructors? In any event, the question that I really wanted to start off with is: what exactly is the value of losing as much as possible given the circumstances?

Lotta ins, lotta outs as you might expect. First things first, we need to know what the value of a draft pick is. In particular, we'd prefer to know his value in the first six years, since those tend to be the years where you avoid having to pay market price for his services. Thanks to Camden Depot we have just that: 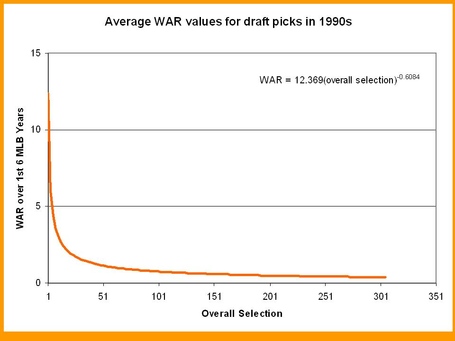 So, notably, this estimator of draft pick value is a power law function. Even if there's some question as to exactly whether or not this particular version is the best fit, we should absolutely expect this approximate relation to hold. That means the difference between the first and second pick will be by far the greatest, the second and third next greatest and so on with significantly diminishing margins. Stretch it out to absurd distances, and the difference in this model between the 1,150th pick and the 1,151st is less than .0001 WAR.

Let's go back to 2007. If the Sox had continued to play .422 ball, they would have ended up with the third pick overall. That prospect, over his first six major league seasons, averaged about three more wins over those seasons than the pick they ended up with. And even that's actually less than the difference between the first and second pick.

Instead, guys like Danny Richar, Alex Cintron, Jerry Owens and Josh Fields went absolutely nuts for a month. Considering the talent the Sox were putting on the field at that point, the only way they were actually going to win some games was if those jokers actually did something productive. But their contributions were accompanied by Jermaine Dye and Gavin Floyd gathering themselves and making real production a real possibility for both in 2008.

To the Sox's credit, they gave playing time to the guys who had pedigrees. More concretely, if you were making projections, one-sixth of the most recent season can be a pretty big factor. If your guys seriously break out, you can actually get those wins lost in the draft back because you expect the incumbents to perform better in subsequent seasons. So what matters is who's leading the late season "comeback". If it's a guy who's leaving at the end of the season, the team won't actually capture any of the improvement. In which case they would very obviously prefer the better draft pick.

Alternatively, '07 provides an useful case study. If everyone starts playing better and they're all candidates to return the following season, then one or two of those guys next year will actually be, say, half a win per season better than he might have been over the next three seasons.

What did we say the difference between the third and eighth pick was again? Well then.