Wednesday was a tough day for a pair of aces. Felix Hernandez gave up nine runs (eight earned) against Texas, while Adam Wainwright suffered an even worse fate (nine earned runs over two innings).

Chris Sale got it out of his system last week. He bounced back from a rage-inducing start against the Rangers with much better luck against the lesser Texas club. He held the Houston Astros to a run on four hits over eight innings, racking up 12 strikeouts along the way. He also secured his 10th win, which spares him the ignominy of a single digit in that column, although it should only embarrass the offense.

Five-sixths of the way through his second season, Sale says he isn't sucking wind:

"My arm feels loose, my body feels good," Sale said. "Something (pitching coach Don Cooper) and I have talked about is last year I kind of limped across the finish line. This one he’s like ‘Let’s sprint across at the end of the year.’ It’s something I’m working toward and trying to do."

And the radar-gun readings back it up. Here's how his velocity compares year over year:

*subject to revision for Wednesday start; will update accordingly

That would certainly seem to back up the conditioning talk. Sale's fastball velocity is up across the board, and it could be higher if Detroit's gun at Comerica Park wasn't off by two or three ticks right before the All-Star break. That's just one of two significant velocity dips when looking at his Brooks chart for the year: 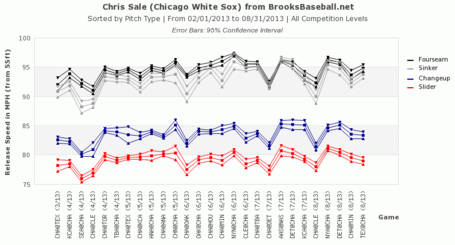 Sale's fastball had a flat night in his first start of August, too. That one warranted monitoring, if not quite concern, but he hasn't yet had to do more with less like he did at points of last season.

Besides the heat, the biggest difference is a dramatic uptick in changeups, but hold that thought for a second while we compare his 2013 numbers to what he accomplished at this point last season:

This is all great, too, because the only flaws -- a mild uptick in hits, homers and runs -- are canceled out by two columns: innings and strikeouts.

Sale is averaging 7.2 per innings per start this season, up from 6.8 at the same point last year. That puts him on a pace for 216 innings if he make five more starts, which would be an impressive second-year total. The strikeouts jump out more, because there's a massive disparity in that column while the walk column remains constant.

The fact that he's as effective -- or in some cases, more effective -- in his second tour around the league would be impressive enough. But he's holding the line even as lineups stop throwing lefties against him.

Every Houston Astro who came to the plate hit from the right-handed side on Wednesday, and that's nothing new. Sale has faced righties in 80 percent of plate appearances in 2013, up from 73 percent last season. Sale pretty much forced the issue by holding lefties to an absurd .368 OPS this year, compared to a.531 OPS at this point in 2012, but he hasn't given up that much ground to righties, either:

That he's facing more righties is the reason why he's throwing his changeup more this season. It's been more useful for him as a strike-grabbing pitch while behind in the count, but he's used it to grab 10 extra strikeouts year over year. His slider remains devastating as ever, and that puts him in elite territory for White Sox pitchers when it comes to the K.

The White Sox shared a couple of notes about Sale's 12-strikeout performance:

A few notes on Chris Sale's start 2night.1) He's the 1st pitcher in franchise history to have 4 starts w/at least 12 strikeouts in a season.

2) Joins Juan Pizarro & Ed Walsh as the only pitchers in franchise history 2 have 6 starts w/ 12-plus Ks in their careers w/ the #WhiteSox.

That second stat is especially nuts, because he's matched that feat in a fraction of the time. Sale threw his 54th career start on Wednesday night. Pizarro threw 145 starts for the Sox during the 1960s, and Walsh started 315 of them in the dead-ball era.

Should Sale maintain his strikeout pace for the 216 innings cited earlier, he'd finish with 230 strikeouts. That would shatter the modern Sox strikeout record of 215 by Gary Peters in 1967. Four Walsh seasons would still stand ahead of Sale, but Walsh averaged 399 innings a year among those seasons, so there's not really much of a point in bringing them into the conversation.

Those pace numbers might be a little optimistic at this point in the year, because even if he figures out how to sprint to the finish line with stuff, Robin Ventura might not push his luck as much. Still, when you can consider 215 strikeouts likely and 216 innings reasonable this late in the year, it's been a great five months. If he could hit those marks while posting an ERA under 3.00 -- well, that seems greedy for even bringing it up, but he'll be gunning for it.