Rookie righty adds a wrinkle in second start against Detroit, but we're seeing some patterns, too

Andre Rienzo's start against Cleveland last Tuesday was a lot of fun, but there were reasons to write it off as a short-lived success. He leaned heavily on a curveball that was better than advertised, and it didn't seem like he could afford any decrease in quality. Likewise, he might've caught the Indians off-guard with his Jimmy John's delivery ("So Fast You'll Freak").

Basically, a slip-up here, some video study there, and he might not be so novel anymore.

But Rienzo was able to pitch into the seventh against the Detroit Tigers on Sunday, and two starts into his career, he's got a nice line to build on:

The Rienzo that took the mound against Detroit showed everybody a couple different things. For one, he still worked quickly, but without the twitches that suggested he chugged a two-liter bottle of Surge in the bullpen (he resisted the urge to point at most batted balls, he was less fidgety around the mound, etc.).

But he tweaked more than his tweaking. Specifically, he featured a changeup for the first time, and that's more relevant to the discussion. Here's how his pitch selection compares start over start (click on the date for the Brooks game logs):

The changeup wasn't devastating -- there's not a big drop-off in speed, and it doesn't have a whole lot of dive. But the Tigers didn't jump on it, and so at the very least, it seems like something that will give future opponents a little more to chew on, and thus a little more time for Rienzo to get comfortable.

(Update: The chart has been revised to account for Brooks' Pitch f/x data revisions. Many of those changeups turned out to be cutters, but he was able to use it on the other side of the plate away from lefties. There's one in particular I'll highlight in the second part of this post.)

I'm happier to see him repeat the success he had with his curveball two starts in a row. He has no fear dropping it on lefties, and good ones, too. After falling behind Prince Fielder 2-1 with two outs in the sixth, he doubled up curves, and Fielder swung over the top of both. Here's the first:

And Rienzo liked the second:

If Rienzo can work his curve on both sides of the plate -- and from behind in the count -- that can provide cover for a mediocre changeup. Consistency with his breaking ball had been holding him back in the minors, but in his first two starts, he hasn't been afraid to go to it often.

That leads to the other trait of Rienzo's starts that resemble a constant: His ability to work up in the zone.

I've combined his two pitch charts into one because they're pretty similar in style. Rienzo explores the studio space: 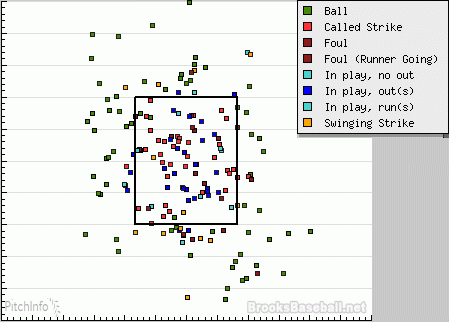 In his start against Cleveland, it seemed somewhat accidental. Josh Phegley doesn't give many high targets in general, and when Rienzo worked up against the Indians, he wasn't hitting the mitt. That could be written off as a jittery pitcher releasing the ball early. But with Tyler Flowers behind the plate, Rienzo revisited that area with similar frequency, and he didn't appear any worse off.

(Those red boxes in the middle of the strike zone might be cause for concern. When you look at the charts showing the pitch number in its at-bat, you'll see a lot of them are 1's and 2's, which means he's grabbing strikes early. I think that might catch up to him, but he got a lot of early-count outs in the middle innings on Sunday -- and most weren't well-hit -- which helped him last until the seventh.)

My favorite sequence of the day was his three-pitch strikeout of Jose Iglesias with runners on second and third and one out. Rienzo grabbed a strike with a first-pitch curve, and Iglesias barely got a bat on a second curve low and out of the zone, nubbing it foul. With the third pitch, Flowers set up low and away. Rienzo worked high and away. The latter location was better:

This was a theme in his previous start. If you watch his highlights against Cleveland, you'll see three straight strikeouts on pitches up in the zone starting at the 1:27 mark. It might work for him because he's been dropping that curve early and often. It reminds me a little of Jesse Crain, who used his overhand curveball to unlock a high fastball:

"I don't know if it's because of his arm slot or his height or whatever it may be, fastballs elevated in the zone are very tempting, hard to lay off of but also hard to hit, obviously, because he throws pretty hard, too," Flowers said. "So kind of from that experience I had against him, kind of came up with the idea of using a higher than high pitch with him."

Crain's listed at 6-foot-1, although his motion and short-arm delivery make him appear smaller than that. The curveball stays higher longer than his other pitches, then loops downward at a fairly sharp angle. On average, the pitch starts around eye level of an opposing hitter, then tumbles toward the dirt about halfway to home plate. [...]

"You certainly can't give up on anything that comes out of his hand high," first baseman Paul Konerko observed. "You can't give up on it because it has a chance to be that curveball, and if you have two strikes you have to try to stay engaged on it."

Rienzo and Crain have different builds and deliveries, but Rienzo's may work to his advantage. He's taller and has a high arm slot, but as Larry pointed out in his Rienzo primer, he also has a longer-than-average extension on his delivery. Releasing the ball closer to the batter forces the hitter to decide just a little bit faster, and so it may be more difficult than usual to tell a curve from a fastball.

There are a couple other aspects of Rienzo's first two starts that I want to get into, but I have to wait for sites to update with his Sunday data. Plus, I have an early-morning tee time. I'd say it's 70 percent data, 30 percent tee time, and either way, I'm going to need to make this a two-parter.