The times are in for Brazil's expeditious export, and the results may or may not surprise you

"The Coffee Song" is atop my list of Frank Sinatra favorites, because it's clever, it's seldom played, and it accounts for most of my knowledge about South American economies. If you're not in a position to listen, the first verse goes like this:

Best I can tell, the heads of state solved this age-old riddle by giving the entire surplus to Andre Rienzo. 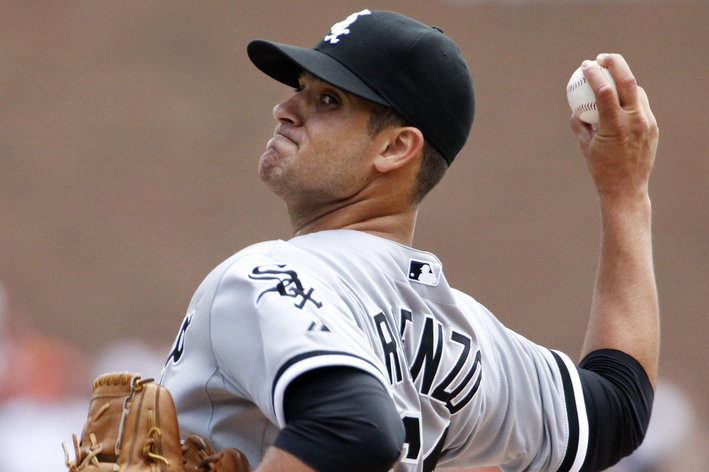 Watching Rienzo's big-league debut against Cleveland from this distance, he looked like he doused his rookie jitters with 12 turbo shots. With his pacing, his pointing and his glove-punching, he had a lot going on. It was a pleasant departure from a team that's spent the whole season drinking decaf, but it's hard to imagine that kind of energy is sustainable.

Yet we're still waiting for the crash. Maybe he wasn't quite as frenetic against the Detroit Tigers on Sunday, but he still placed a premium on precious seconds.

It's a pace that could be described as "Buehrlesque" in terms of time, but he goes about it in a completely different fashion. Mark Buehrle's sleepy, unassuming body language turned his rapid-fire approach into an optical illusion ("Oh, am I back on the mound already?"). With Rienzo, make no mistake: He wants the inning over and over now. He pitches as though he's double-parked, sure, but also like it's 95 degrees, he bought five gallons of ice cream at the store and he's not positive he cracked a window for his dog.

I wanted to see what the numbers said, but FanGraphs held out on us in presenting Rienzo's pace stats because his major- and minor-league profiles weren't merged until Tuesday. Let's consider that building suspense.

Then let me build some more. Here are the paces for baseball's most punctual qualified pitchers:

Dickey and Buehrle are battling for the pace race, but there just might be a new kid in town. Compare their numbers to Rienzo's pace times from his first two starts:

The eye test doesn't deceive. Rienzo works as quickly as anybody, and some Tigers became aware of that.

Victor Martinez is as responsible as anybody for adding that half-second to Rienzo's pace. The veteran hitter and former catcher knows a little something about pitcher rhythm, and he decided to do something about it his second time up. At first this was a GIF, but I decided to convert it into video because the park-audio option on MLB.tv really tells the story:

Martinez approached Rienzo at his usual speed in the first inning, but with Rienzo posting zeroes on the scoreboard, Martinez tried to break the rookie's focus. Martinez stepped out, he adjusted equipment, he looked for nonexistent signs ... in other words, he dawdled.

Judging only by aesthetics, it kind of worked. You can tell in the above clip that Rienzo doesn't like waiting around, and it became more apparent in the third plate appearance when Rienzo committed a false start:

Its effectiveness was questionable, though. With no stalling tactics in his first crack at Rienzo, Martinez muscled a single to center by tomahawking a clear setup pitch on an 0-2 count:

When Martinez came to the plate the in the fourth inning, Rienzo had retired the last six batters on 14 pitches total. That's when ol' V-Mart decided to interrupt the lightning round in the above video, but it didn't quite work. Martinez did make Rienzo throw six pitches, and he laid off a curve to even the count at 2-2, and he was correct that Rienzo wanted to work up again, so he had all that going for him.

However, Rienzo threw a backdoor cutter that never quite came back to the plate. It all looked the same to Martinez, who committed and chased it in vain for strike three.

The casual Martinez returned to the plate for his third plate appearance, and he drew a walk, but I don't think Rienzo's rhythm had much to do with it. I'll get to the other reason in a minute, but to finish this thought, I appreciated the gamesmanship between Martinez and Rienzo. And if I were the pitcher in this situation, I'd take it as a sign of respect. The furious pace started to overwhelm Detroit's lineup, forcing Martinez to try to coerce Rienzo into working on his terms. Rienzo squirmed a bit while waiting, but I don't think it got to him as much as ...

Rienzo opened up the sixth by trying to field an Austin Jackson comebacker with his bare hand. It was effective enough, as the ball caromed to Alexei Ramirez for a 6-4 putout to keep the speedy leadoff man off the basepaths.

Rienzo shook it off in stride, and ended up finishing the inning by fanning Prince Fielder with two tremendous curves (as seen in the previous post).

When he came back out to the mound in the seventh, Rienzo walked Martinez on four pitches, then walked Jhonny Peralta on seven pitches. He had only walked one batter over his first six innings, and all of a sudden he started missing by plenty. One batter later, Alex Avila doubled in a run and chased Rienzo from the game.

Hawk Harrelson and Steve Stone thought his hand might have started to stiffen up while sitting on the bench. From the video of Rienzo's postgame comments, the beat writers didn't ask him specifically about the hand. Scott Merkin's question did allow the opportunity to talk about a physical issue, though, and Rienzo didn't take it:

It's easy to imagine a hot shot off the the pad below the thumb affecting the way the ball comes out of your hand, but since Rienzo didn't touch upon the topic, that's only a guess. He did walk three Indians in an inning during his debut, so lapses of control are not out of the ordinary.

Then again, even that crooked number involved an injury delay. Michael Bourn sent Rienzo to the ground by stepping on his heel crossing first, and an extra run crossed the plate before help arrived. Then you remember what set up that collision -- Alexei Ramirez failing to start a double play because the umpire screened him.

So walking it back, Rienzo has allowed five runs over 13 innings, which is good enough for a rookie. But three of them are unearned, and all of them followed strange events that might have even knock a steely, battle-tested pitcher off course. He's yet to allow a run that's run-of-the-mill, in other words.

This isn't to absolve him of all responsibility, because all runs are equal in the eyes of the Lord, and preventing weird baseball from snowballing is part of his job. But as a rookie pitcher who's got plenty on his plate, he's doing a good enough job of controlling the action, if responses like Martinez's are any indication.

It'll be fun to see if Rienzo starts feature more of these games within the game, as all entertainment is welcome while the Sox play out the string. We'll find out in due time whether he's running on novelty, but so far, the White Sox have secretly replaced a $14.5 million favorite with instant coffee, and it's rich enough for now.

More from South Side Sox: