Making his home debut Tuesday night, Erik Johnson put his best foot forward, only to find out that Conor Gillaspie does an incredible impression of an ottoman.

It really did fall apart that suddenly, as Johnson trailed after three batters, and before he even made his first mistake. When Robin Ventura came out to take the ball from him in the fourth inning, I hope he told Johnson, "It's not your fault."

Let's go to the tape. And by "tape," I mean, "GIFs with some YouTube videos in order to show sequences without killing page load times." Click on the "x batter" for the respective pitch chart.

Johnson fell behind Jackson 2-0, then came back with a pitcher's pitch fastball for the first strike. The count goes full, but Johnson wins with this fastball on the seventh pitch.

None of the pitches are driveable. The one pitch in the strike zone is Johnson's fastest heater of the night (96.22 mph), and Jackson can only fight it off. 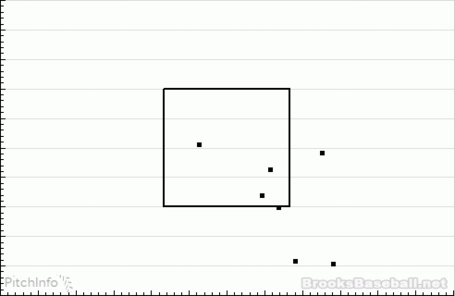 It's not particularly efficient, but it's a start. He'll ramp up the precision shortly, although he won't be rewarded for it.

Johnson starts out Cabrera by missing high. Phegley starts out by not catching the high fastball, allowing Dirks to advance to second.

Johnson regroups and proceeds to throw Cabrera two perfect sliders off the plate, getting a pair of swings and misses. He then comes back with a fastball and fools everybody -- including home plate umpire Tony Randazzo.

So what happens? Johnson comes back with a slider for another uncalled strike (at least according to Brooks and Gameday)

The count goes full, and Johnson gets Cabrera to chase a slider even farther off the plate than the other two he swung at. All he can do is reach out and tap it towards third. Yet Johnson still isn't rewarded:

If baseball were just, Johnson would have thrown a 1-2-3 inning on 15 pitches. Instead, he found himself down 1-0 after 17 pitches, and just one out into the ballgame.

I combined Brooks' charts for the first three hitters, and it looks like Johnson deserved better: 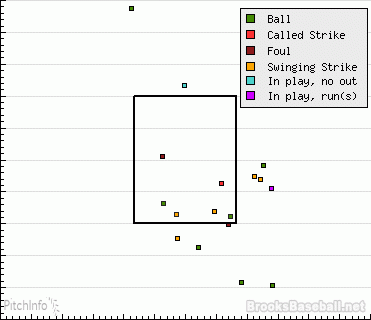 And if you're interested in the tally, here's what happened against what he deserved:

Of course, deserve's got nothing to do with it, but when the culprit is defense and not pure BABIP, sympathy is easier to find. Johnson didn't make his first bad pitch until he was already down 1-0, when he left a first-pitch fastball up and out over the plate to Prince Fielder, who shot it to left for a single that first-and-thirded Cabrera. Johnson then pitched Victor Martinez well enough for a routine fly, but thanks to the error, it turned into a sac fly.

Despite an excellently executed inning, Johnson already gave up more runs than the offense could bear. He didn't pitch as well the rest of the way, but when his best stuff isn't getting results thanks to circumstances out of his control, it doesn't set a great tone for the rest of the start.

After the game, Robin Ventura cut him slack, and Johnson said the right things:

"He threw fine," Ventura said. "We didn’t help him at all, but he was fine. Pitch count-wise -- if we’re making a few plays here and there -- it’s probably a different story. [Tigers starter Rick] Porcello, he kind of scattered his hits. For Detroit, they bunched together and scored some runs and it was ugly."

Pitching, though, isn’t always about being set up under the ideal conditions, and Johnson knows he could have been better when the heat started to rise.

"I had some tough breaks out there, but I thought I attacked the zone as best I could," he said. "I thought I could have worked ahead of a few more hitters, of course, and put myself in a better situation."

And I hope that's the attitude, because the last Sox pitcher who matches Johnson's profile -- high draft pick whose stock skyrocketed quickly -- was Daniel Hudson. Johnson made his debut after 236 innings in the minors, a few starts more than Hudson's 217.

Hudson needed some time to find big league success, but he didn't get it in Chicago. When the Royals beat him in his reintroduction to the rotation in July of 2010 -- aka his third career start -- the trade rumors kicked into full gear. There was smoke behind the fire, as the Sox sent him to Arizona with David Holmberg for Edwin Jackson before the end of the month. After he left, Chicago media reports downgraded his potential to back-of-the-rotation at best, which he immediately disproved with the Diamondbacks. But in Chicago, he was a victim of his own success.

(Speaking of Holmberg, he made his major-league debut for the D-backs a week before Johnson. Holmberg is 22, or a year and a half younger than Johnson. Why he was the pot-sweetener for a trade was already a losing proposition as a 1-on-1 deal remains a mystery.)

The Sox aren't contending right now, nor are they pretending they can, so Johnson should get more time than Hudson received. However, the conditions are conducive to a surprise deal, because even the young pitchers know Rick Hahn might move them, and U.S. Cellular Field is Disenchanted Castle.

As long as everybody is disappointing everybody to varying degrees, it's difficult to tell who's safe. I just hope that Johnson gets a chance to disappoint on his own merits.