Several pitchers have exceeded personal-high workloads, but some may benefit from staying on schedule

Share All sharing options for: Shutting down White Sox starters not open-and-shut cases

Following up on this morning's post, it's not just that Chris Sale has passed 200 innings, but that he's broken through the barrier with no significant concerns about his well being. Beyond the standard he's-vital-to-the-future-of-the-franchise set of concerns, anyway.

Other starters aren't so fortunate as they enter unprecedented territory. Robin Ventura didn't name names when fielding questions about fatigued pitchers on Saturday, but he didn't rule out the possibility of a shutdown or two:

"I think there’s a little bit of a debate there," Chicago manager Robin Ventura said. "We could do that with pretty much all of [the starters] just because where we’re at in the season and looking forward to next year." [...]

"We still have to have guys go out there and pitch," Ventura said. "If it looks like it’s a better decision to keep a guy from throwing, we’ll probably do it."

Besides Sale, three other pitchers have carried burdens to the point of diminishing returns, although that doesn't necessarily mean they've slowed down. 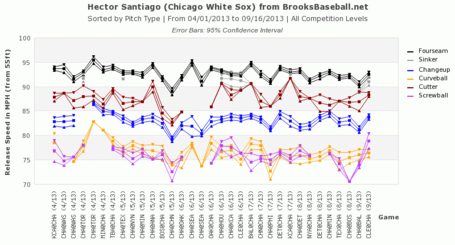 Santiago has faced the most scrutiny over the last couple weeks than any other starter, mostly because his starts have been the most frustrating. He’s flirted with untenable pitch counts all season due to early struggles, but he’s been unable to outrun bad first innings of late.

Don Cooper challenged him to throw more strikes, and watching him go against Cleveland on Thursday, he tried to. Problem was, he had problems getting past strike two because of two problems that you can see above.

Declining velocity stands out. The less obvious factor: His changeup hasn’t decreased by the same amount, so there’s less of a difference between the two. Peak Santiago – for instance, this start against Detroit on Aug. 2 – was able to find 95 throughout his seven innings with a changeup that was, on average, 11-12 mph slower.

In his last start against Cleveland, his change was 8-9 mph slower. That doesn’t seem like a big difference, but when you see his velocity chart throughout the start, the high ends and low ends start narrowing toward the 7 mph range 30 pitches in. So he’s fighting a two-front war – late in the season, he’s lost some of the oomph and command that made his fastball a pitch he could lean on, and that diminishes the effectiveness of his best secondary offering. You can see it in his swing-and-miss trends.

Santiago already set a career high in innings pitched, and he’s one start shy of his personal high of 23, which he set in 2011 at Winston-Salem and Birmingham in 2011. Doing it in the majors is a much more taxing proposition, especially under the strange circumstances he was deployed earlier in the season. He says he's not tiring, and I wouldn't expect him to say anything different, but Cooper and Herm Schneider watched his last start together from the dugout rail, so color me skeptical.

Shutting him down – or maybe just skipping a start – wouldn’t be awful, especially if everybody is annoyed by his present form. Cooper doesn't need another hospital visit. 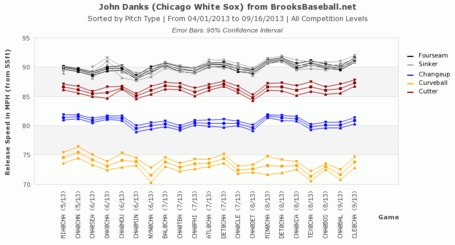 John Danks' struggles can't be traced back to velocity alone, because it's better than it was early in the year, and it' stable. He's even doing a decent job of maintaining his best fastball over the course of the game.

Watching Danks at this stage is reminiscent of Jose Quintana's second-half struggles last season. Quintana's velocity actually went up, but he could only throw to one side of the plate, and his command of that limited area unraveled to varying degrees over the last two months. Hitters didn't have a whole lot of trouble figuring him out.

Danks is dealing with the same issue, more or less. He came back from shoulder surgery as a flyball pitcher, and his misses are leaving the park again (five homers over 9⅓ innings in September). Now he's getting frustrated:

"Nothing worked for me," Danks said. "I threw the ball where I wasn’t supposed to throw it and got my [rear end] kicked." [...]

"It was embarrassing; this is supposed to be the major leagues, and I went out and pitched like a guy that did not belong tonight," he said. "I need to get it turned around and make the most out of my last few starts."

But he doesn't want to be shut down, because he wants to have an innings total that more closely reflects a full season's work, and probably a performance or two to hang his hat on before the season ends. Every start means something for Danks, although his situation probably shouldn't be simplified like he's coming back from lesser injuries or surgeries, where innings are innings are innings. Shoulder/capsule injuries have a way of coming back, so overuse is a concern if he's getting ragged mechanically. 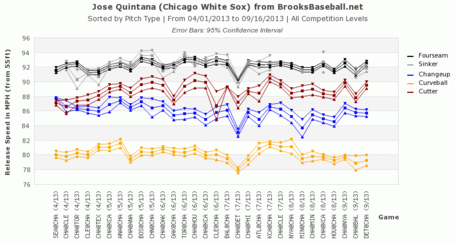