Share All sharing options for: Sox 6, Tigers 7, 12 innings: That was special.

The Sox scored two runs in the seventh, 1 more run in the eighth, and 3 insurance runs in the ninth inning for a 6-0 lead with a mere 3 outs left on the home ledger.

That is when the 2013 White Sox showed the dozen of us still paying attention just how spectacularly bad this 30+ games under .500 club truly was.

Look at this win expectancy chart. Look at it. It is amazing. 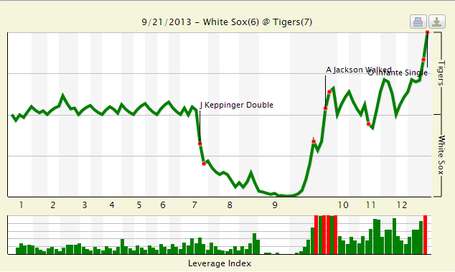 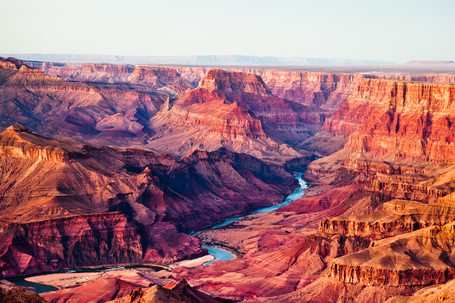 The Sox were up two. They added a run the next inning, then doubled the total in the top of the 9th.

6-0 and your opponent has three outs left.

That is a win every time, all the time, unless you are dealing with a truly special ball club.

Let me introduce you to tonight's hero- Nate Jones

Nate Jones recorded one out in the 8th to keep Sale's man stranded on the base paths and end the inning up 3.

Bryan Anderson got his first hit as a White Sox professional. He crushed a double that scored Jordan Danks and Jeff Keppinger who were both on base at the same time somehow.

A 6 run lead going into the bottom of the 9th.

The Tigers hit for the cycle, added a base hit, and scored 5 times without recording an out before forcing Jones from the contest. It was magnificent.

With the 6 run lead reduced to 1 with no outs in the 9th, Addison Reed found himself in yet another save situation.

He walked 4 guys in his two thirds of an inning worked, allowing the tying run to score.

If you have been following along at all this year you just knew they were going to lose this one now. It was just a question of how would they go about it. Well, in the 12th inning, we had the classic dreaded lead off walk to Joe Kelly. He took second on a Fielders choice(Prince Fielder chose to run very slow and make an out at first). We saw the intentional walk followed by a regular old walk to load the bases, and Jake Petricka took the walk off loss on a base hit by Omar Infante.

Impressive, Sox. I have come to expect some pretty bad baseball this year, and almost even welcome it, but I really thought Sale would get the win tonight, inch a little closer to .500 avoiding a somewhat dubious club. You got me again 2013 White Sox. Well played.

Miguel Cabrera went 3 for 4 with a walk, but he did make a hilarious out on the base paths with a pathetic attempt at stretching a single into the double it normally would be if absolutely anyone else was running the bases. Avisail Garcia ran to the corner, fielded it cleanly and pegged him at second base by a country mile. Avi was 2 for 6 with a SB and a run scored.

Rick Porcello was impressive through six innings, striking out nine, but the Sox tagged him for two runs in the 7th inning.

Chris Sale was brilliant. He struck out seven and walked one, stretching out 4 hits but yielding no runs.