Plus: Rick Hahn offers hints about the future, Paul Konerko doesn't, and Alex Rios hits for the cycle

Adam Dunn sat for the third straight game, and for good reason. He hasn't been able to shake a slump that has now extended beyond a month. He has just 12 hits over his last 100 at-bats, while striking out a whopping 47 times.

It's another lost season for the Big Donkey, but he's not ready to write himself off:

Surprisingly, Dunn said the feeling at the plate hasn't been much different from when he's on target to when he's off the mark.

"You know, there's not, other than there were a few little things that's different from when I was swinging the bat good to when I wasn't," Dunn said. "For the most part, I felt pretty good all year.

"We've got a good base, a good foundation to go into the offseason and build on. Me and [White Sox hitting coach] Jeff [Manto] have continued to try and do the same thing. Hopefully in Spring Training, everything will pick right back up after having a full year to really feel in a pretty good place."

In a way, he has a point. Despite the recent strikeout binge, he's going to easily finish the lowest strikeout rate of his White Sox career, and one that lines up with his last year in Washington.

He just followed a helluva path to get there: 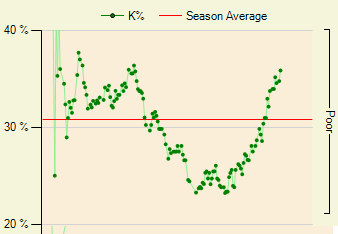 Plus, it's really not that great of a sign for Dunn to match his 2010 strikeout rate, considering he never reached 29 percent before his last season with the Nationals. It probably was a harbinger of doom, looking back on it. So let's look into the other direction instead.

As is the case with forward-looking assessments involving the front office, there are specifics that Rick Hahn can't really talk about. The more interesting items are Hahn's interactions with White Sox fans throughout the year, and some clues about the 2014 draft bonus pool (eight figures) and international spending (2½ times greater than last year).

Paul Konerko still hasn't said anything about his plans for 2014, but it's still hard to see a fit that represents the Sox's best chance at maximizing their on-hand talent. Perhaps the talent can't be maximized just yet, and if that's the case, Cal Ripken Jr. might have offered some help:

Cal told Konerko that as you become older as a player, winning becomes even more important and admitted that he couldn't have gone through a rebuilding process in Baltimore the year after he retired.

Bruce Levine (second link) has a source telling him Konerko will address his future during the four-game set against Kansas City, whatever that's worth.

We'll see if a skipped start gives Hector Santiago the oomph he's been missing in what will likely be his final start of the season. The plan calls for the Sox to finish out the season like this:

That rotation is contingent on Rienzo overcoming a blister problem.

The Astros locked up the first overall pick in style on Monday night, losing to the struggling Texas Rangers by a score of 12-0. Jayson Stark shows why the Sox never really had a chance at picking first -- and this was published before Houston...

...gave up a cycle to Alex Rios on Monday night, and in his first four at-bats. It was a grindy cycle as well, as it included a double with a big turn at second, an infield single, and a homer that barely cleared the wall in left.

The Orioles' flagging playoff hopes took a major kick to the groin as Manny Machado left Monday's game against Tampa Bay on a stretcher after his knee bent in an unexpected and horrible direction on what should have been a routine step on first base.